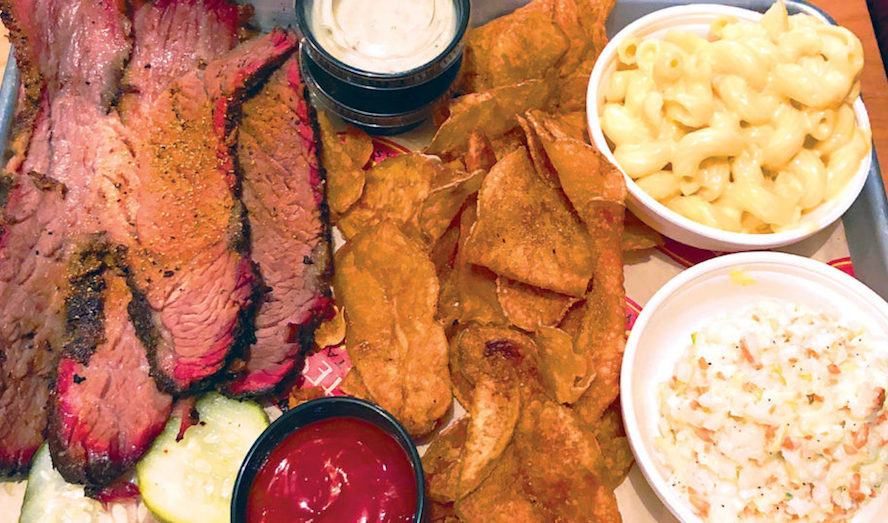 The first sign that Joe’s Older Than Dirt had returned from its two-year absence was the reappearance of its fabled moose statue out front, overlooking the busy traffic on New La Grange Road.

Yes. Joe’s is back, moose statue and all, and, in some respects, it’s better than ever after its brief closure for renovation and 19-month tenure as Olé Group’s Red Barn Kitchen. Olé, which runs the popular Artesano, Mussel & Burger Bar and a growing chain of El Taco Luchadors, put a lot of effort into upgrading the pleasantly grungy, old Joe’s property.

Current operator Cres Bride, who had been Joe’s general manager for several years and has returned in partnership with Olé, oversaw a bit more updating, restoring a second bar in the front end of the sprawling building. It reopened last Feb. 21, one year ago tomorrow. Happy anniversary, Joe’s!

The new Joe’s is a lot like the old Joe’s, only a little brighter and a little fresher, but still equipped with plenty of big-screen televisions for sports watching and abundant craft beer taps (and yes, mass-market beer taps, too), not to mention well-crafted cocktails and a good bourbon selection. There’s also a trivia night and karaoke night and mimosas and bloody marys on sale Sundays. Yes, indeed, my friends, Joe’s is well and truly back.

We dropped in for an early evening dinner on a weeknight and found a good crowd on hand already enjoying good food — mostly fried, not that there’s anything wrong with that — good drink and good service. So, there was really nothing not to like.

The menu has returned to the down-home style of the original Joe’s, moving away from the more chef-driven menu that prevailed at Red Barn Kitchen. Gone is the Berkshire pork and Amish chicken, replaced by nameless generics; and the new menu does not spell out such minutiae as peppercorn rubs, cherrywood smoke or bourbon glaze.

Red Barn’s pricey $22 brisket and ribs plates are gone — in fact, ribs have disappeared from the menu entirely — but a selection of five meat platters range from a low-end $9.99 (for pork, brisket or fish tacos) to $12.99 (for a brisket platter).

More than a dozen appetizers, nacho plates, soups and salads are $5.99 (for barbecue-seasoned pork rinds) to $17.99 (for a 20-wing plate). The rest of the menu consists of 16 sandwiches, wraps and more, from $8.99 (for several items including a BBQ chicken sandwich, veggie wrap or smoked bologna sandwich) to $12.99 (for a smoked brisket quesadilla).

(When I checked Joe’s website for menu information, it hasn’t caught up with a recent menu update; most prices were $1 to $2 more than shown online.)

I summoned a rye old-fashioned ($7) from the cocktail list and got a well-made, spicy, sweet cocktail, generously portioned for the low-end price.

The appetizers tasted more like Joe’s than Artesano, but that was fine. Joe’s fried pickles ($7.99) were crisp dill chips competently fried in thin breading. Lesson learned: Even though they’re small enough to pop in single bites, take the time to bite them in half. You get more delicious pickle flavor that way.

Once I got the idea of a fried green tomato BLT ($8.99) into my head, especially when I discovered it also contained pimento cheese, I had to have one, and I wasn’t sorry. It reminded me of a fancy burger, but with a thick stack of three, fine, crisp fried tomatoes atop a light spread of zippy pimento cheese and crisp bacon, dressed with iceberg lettuce, sliced onion and thick, crunchy pickle chips. It was a fine, unexpected combination of flavor and texture. It came with a cup of finely-chopped, creamy slaw and a pile of crisp, slightly sweet, house-made potato chips.

A brisket platter ($12.99) featured a generous portion of thin-sliced, juicy, smoked brisket with a charred edge lined with a hot-sweet dry rub that erred a bit on the side of sweet for me. Still, it was good brisket, with potato chips, creamy mac-and-cheese and slaw and dill pickles alongside.

A filling dinner for two came to a reasonable $46.85, plus a $10 tip for our friendly and helpful server, Kristen.

Noise level: Joe’s is a friendly neighborhood gathering place, so you can count on the sound of happy people talking, laughing and sometimes shouting. (Average sound level 75dB, the sound inside a moving car, ranging from extremes of 67dB, the sound of normal conversation, to 81dB, akin to loud singing.)

Accessibility: Accessible to wheelchair users overall, but raised threshold bumps could require an extra push and about half of the tables are tall bar tables.