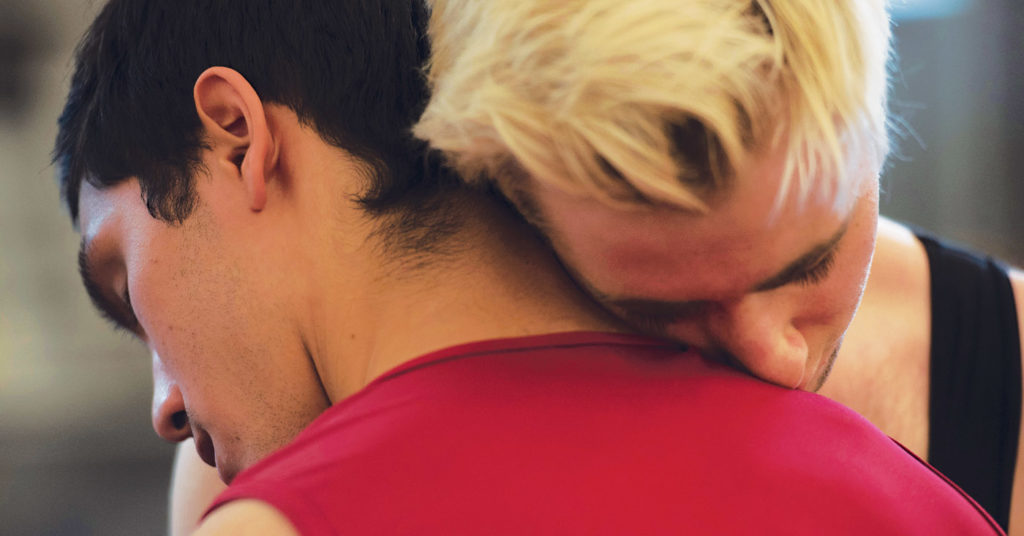 Only two productions remain in the Louisville Ballet’s “Season of Romance,” and one kicks off tomorrow: “Human Abstract,” which Choreographer and Director Lucas Jervies calls an “abstract tragedy.” It is an evolution or “re-examination” of the show he brought to Louisville in 2010 and 2017. The themes are the same: love, loneliness, isolation and connection and abandonment and heartbreak. “Human Abstract” uses an interdisciplinary approach to the arts, which Jervies said is a natural progression for a director — to admire elements from other disciplines and think: Why couldn’t I have something like that in my show?

This curiosity-driven approach gives the audience a contemporary dance theater piece with multimedia elements and a strong ballet backbone.

The movement vocabulary of this show is, at times, animalistic. There are moments when you can’t tell whether the dancers are seducing or rejecting one another; being passionate or violent; accepting an action; embracing a lover or smothering them to death. Jervies told LEO the opening scene of the dinner party is inspired by real-life family dinners, where, “people’s inner animal comes out.” He was speaking about family behavior in general, but specifically about being gay at a family table where homophobic “jokes” are made, ribbing goes a little too far, and you can’t voice your discomfort because then you’re “creating drama.”

According to Jervies, that scene is an exploration of shame that leads to the protagonist leaving that chaos behind and taking the audience to the next scene, a sort of pastoral, harmonic paradise reminiscent of Eden. Here, the characters come to life, seeming to emerge from the ground — naked and barefoot — and in a joyous and playful cypher, they alternatively strut, leap and pose as they express their personalities and pair with other characters as a way of testing compatibility — sometimes successful, sometimes not. This lively scene has the dancers voguing, experimenting and creating beautiful mandala shapes. Here, director Jervies’ philosophy of dancers finding the psychology of the character through movement, rather than a script, comes through.

Of course, things can’t remain peaceful forever — the dancers compete and fail and pair off and face rejection, which leads to the charming pantomime scene, “Brother.”

For this scene, Jervies said he thought it would be fun to explore a heavy topic such as loneliness and heartbreak in a lighthearted way. He called one character “the sad romantic — all he can do is sing love songs; he’s like a karaoke machine.” This character is played by Luke Yee, whose lovely singing voice is perfect for conveying his character’s vulnerability. Yee plays opposite charismatic trainee Xavier Pellin in this scene, where the theme of isolation and longing — the push and pull of wanting human connection but not being entirely certain of with whom we want it — comes through. Jervies said, “the physical language in the pantomime is they move like robots or dolls because if they move in the wrong way, they’ll be busted.”

There are elements of humor in this scene — some subversive and surprising — and in the rest of the show, as well. Jervies said he finds humor in the entire situation — someone standing on stage, the audience waiting for them to perform and admits that he (like all directors) is essentially asking dancers to “act like a fool, confidently.” He’s willing to be self-deprecating and share personal stories with the dancers, in hopes that they’ll relax and take a risk that could lengthen their line or add another turn.

Laughing, he said, “I find stillness funny … awkward silences. You all know Erica [De La O] as Odette or Marie, and by stripping her naked and having her lip-sync to a big beautiful heartbreak song is kind of subversive and I think really funny.”

Jervies is an empathetic, energetic and communicative choreographer. At one point in rehearsal for “Brother,” he crouches in a huddle with Yee and Pellin and talks about their characters’ motivations — the shame and uncertainty that informs their every move — referencing a book that’s been meaningful to him in this area, Alan Downs’ “The Velvet Rage.” The dancers listen, get up again and get it right.

After the pantomime, the dancers go to war.

The final scene is on a soccer field, representative of Jervies’ youthful failure to keep up with his cousins and other boys in conventionally masculine endeavors. Jervies sees soccer as the “contemporary ritual of war” — the site of his “sissy-boy shame” — and so the last scene is about dancers killing each other on the soccer field. The soccer ball is a disco ball that represents the gayness of Jervies’ life, and if that isn’t enough of a reason to see this ballet, I don’t know what is.

Louisville Ballet’s Artistic and Executive Director Robert Curran said that he’s sad more people didn’t get to see “Human Abstract” the last time. That more people did not attend, he said, highlights the importance of strengthening the Louisville Ballet as a brand so that “when people look at a name like ‘Human Abstract,’ as opposed to ‘Swan Lake’ or ‘Sleeping Beauty’ or ‘The Nutcracker,’ they’re confident the work is worth seeing.” It’s the only way, in his view, to keep the ballet tradition alive. It’s important, he said, “to have today’s voices telling today’s stories to keep our society thriving — and to keep it honest, too.”

It may be too honest for some people.

Last week, Louisville Ballet published “An Open Letter Against Hatred and Prejudice” in LEO after receiving hateful emails regarding the LGBTQ theme of “Human Abstract” and the advertising (which LEO ran) that shows two men in leotards from behind and holding hands.

The letter said, in part: “We aim to mirror the city we’ve chosen to call home. In that spirit, we’d like to share Human Abstract, a dance performance that tells the stories of the LGBTQ community in honest and unique ways. …

“We cannot and will not be bystanders to hatred and prejudice. As artists, we have a duty to challenge preconceptions respectfully and to tell the stories of those individuals and groups who make our city what it is and what it should aspire to become.”

Those iconic and beautiful bottoms on the promotional materials may have been threatening, but they represent the strength and beauty of dance. “Human Abstract” is a smörgåsbord of that beauty, and the audience will be more human for having experienced it.