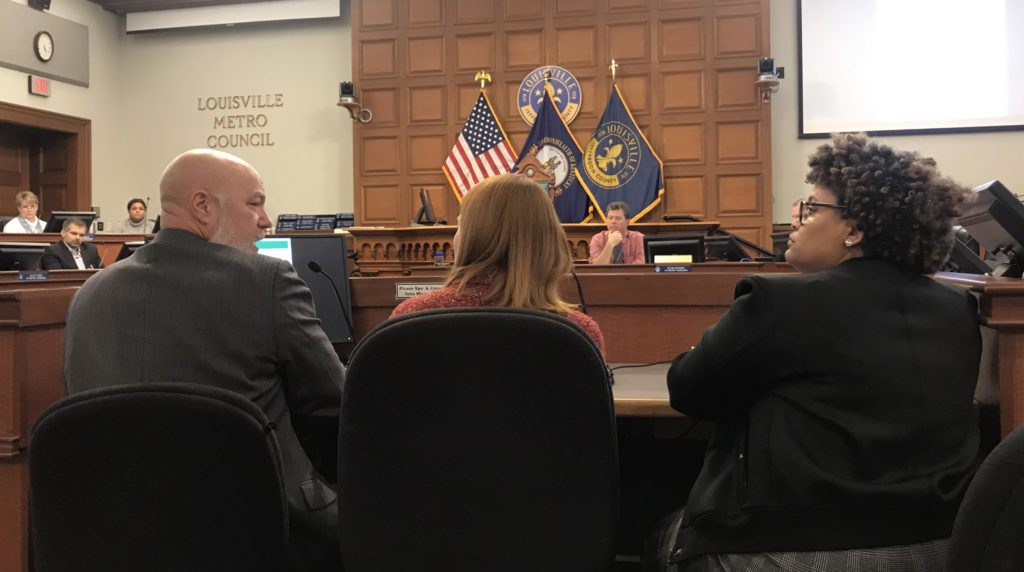 At a Metro Council committee meeting Thursday, officials from the city and Coalition for the Homeless presented an update. | Photo by Danielle Grady

The temperature was below zero with the windchill, but Charles Spray and his wife Tara were outdoors, bundled inside a tent, surrounded by blankets and warming themselves around a propane heater and a tin containing Sterno.

They were not interested in staying in one of Louisville’s shelters — making them two of the 118 people who stayed outside that night, according to the Coalition for the Homeless’ annual count.

Charles Spray said that they avoid shelters because they fear bed bugs and theft and have had bad experiences with other shelter users. “It’s not because we’re doing drugs or anything,” Spray said. “It’s because of those things that I just said and the people.”

The reasons that Louisville’s homeless refuse shelter are numerous, including mental illness, criminal records and a wish to avoid others, who could steal their belongings or pose a threat.

Yet, outreach workers continue to try to convince people to come inside and offer rides to shelters, as they did throughout the night of Jan. 30. The numbers showed not all were convinced. “We might look at it and think there’s no way that’s a rational choice. But sometimes, it’s the right thing for that individual person,” Eric Friedlander, chief resilience officer for Louisville, said.

A bed for everyone?

When the Metro Budget Committee met Jan. 31 for an update on city efforts to help its homeless population, Friedlander told members the city “probably” had enough space to house all of the homeless people outdoors the night of Jan. 30. Natalie Harris, executive director of the Coalition for the Homeless, backed up Friedlander, saying that she thought there would have been room if those who were outside had been distributed amongst the shelters appropriately.

There were maybe 778 beds available in Louisville on Jan. 30, based on 2018 reports from Louisville’s shelters and the Coalition count Jan. 31. But some shelters, such as Wayside Christian Mission, were accepting an overflow of people off of the street, and at least one organization not included in the coalition’s bed count, The Living Room, housed people.

It’s not known yet how many homeless people in Louisville were staying in the shelters because they have until Feb. 6 to report their numbers. Last year, 926 people were recorded as homeless in the city’s point-in-time count.

The count is important because it is linked to funds and also helps show whether policies are working or more must be done. It is conducted by volunteers visiting outdoor sites and shelters reporting their own numbers. Maria Miles, a lead organizer for The Forgotten Louisville, believes there are thousands of homeless people in Louisville at any one time, more than the Coalition’s count shows.

Mary Frances Schafer, the director of community coordination for the Coalition, said that it is “safe to assume” some people are missed, as there are those who avoid the counters. The Coalition also compiles a census of all the “unduplicated” homeless people who were counted in the city during a one-year time frame, based on reports from homeless services providers. In 2017, that estimated number was almost 7,000,

Room at the inn

Despite the cold that evening, at least one of Louisville’s shelters had unfilled beds.

St. Stephen Family Life Center, which opened a shelter for the first time on Jan. 30 in response to the cold, had 27 available beds. Only three people stayed the night, said Pat Mathison, a consultant for the life center. And that was with volunteers conducting wellness checks on those who were outside. Some of the reasons Mathison heard from people who did not want to take shelter seemed reasonable, but others, she said, were harder to understand. She spoke with some people who said that if they left their stuff behind, they feared it would be stolen.

Mike Degutis, a man living near the fairgrounds who spoke to LEO, said that he didn’t have a good answer for why he declines shelter — or any other form of assistance.

“A lot of people take stuff like this and abuse it,” he said. “I’m not that person.”

On that frigid evening, Miles and Ange Tamura, volunteers for The Forgotten, sped through Louisville’s deadened streets in a Toyota Tacoma pick-up, a bounty of supplies covered by a blue tarp in their cargo bed. They were among the teams of outreach workers looking for people.

The two made nine welfare stops, finding a couple whose truck had broken down at one and groups of tents at the others. At each camp, they asked what its residents needed, and then offered chili, hot chocolate, donuts, Sterno and socks.

Some people LEO spoke with seemed unworried about the hours of numbing weather ahead of them.

“You just get underneath, and you’re all right,” said Degutis.

Spray said he planned to outfit his tent with emergency blankets soon.

Also out on the streets were Louisville police officers, who performed welfare checks and arranged rides to shelters.

Friedlander told LEO that how the city government handles homelessness isn’t perfect, but he thinks it’s improved since last year. For instance, this year, the Metro Council designated more than $500,000 for homeless services, including to open low-barrier shelters. Those accept people regardless of whether they’re with a partner, have animals, are intoxicated or have been banned from other shelters.

Wayside opened its before the money was available. The Healing Place opened 24 emergency shelter beds, Volunteers of America started sheltering more homeless families and the St. Stephen Family Life Center opened a day shelter and one for extremely cold weather.

Friedlander said the city is working with the St. John Center for Homeless Men to capitalize on the existing networks for volunteers and nonprofit groups. It has tried to improve communication between street outreach volunteers, the Coalition for the Homeless, police and Centerstone, he said. “I mean, we’ve been working on that for over a year, and so I think it’s hopefully starting to pay off a little bit.” •