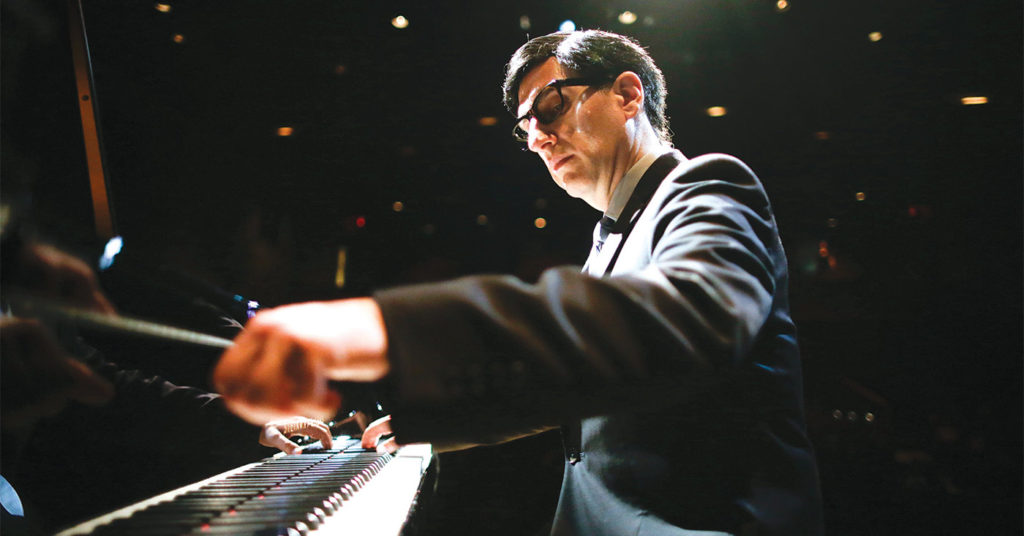 Hershey Felder, a nationally-acclaimed actor, pianist, playwright and composer, has not shied away from explaining his hesitancy to tell the story of Irving Berlin. Berlin’s music “was popular, almost folk music, so to speak and not really where my interests lay,” he told Kaytlin McIntyre of Seattle Repertory Theatre. After all, Felder has portrayed Beethoven, Tchaikovsky, Chopin, great classical composers and, in particular, pianists.

Berlin, by comparison, was famously barely able to play the piano, even after writing 1,500 songs.

Eventually, however, discussions with friends, as well as a meeting with Berlin’s daughters, convinced him. And now Felder is touring the country with his one-man show, portraying the life and prolific career of the beloved songster. On Jan. 29, the show arrived at Actors Theatre of Louisville.

Felder is almost as interesting of a draw as is his subject. These solo plays taking on the life and character of famous musicians and composers have been performed all over the country and even earned recognition in Time magazine’s 2016 Top 10 Plays and Musicals. It’s no wonder that he’s attracted to these characters as he is a composer himself and a nearly-lifelong piano player. In addition to acting, composing and writing, he directs and serves as a scholar-in-residence at Harvard University. It’s an impressive resume and makes it easy to imagine that some of the audience may be there for him as well as for Irving Berlin.

But, of course, it’s Berlin’s story that we’re really here for, and from the beginning, it’s clear that it’s a story not quite so bright and cheery as many of his catchy classics. Few people hear “Always” and imagine having to run away from a small, Russian village on fire. We don’t hear “Blue Skies” and picture a young immigrant sleeping on benches in Central Park and busking during the day. But this was Berlin’s reality: a childhood as a Jew in czarist Russia, a hard upbringing as a poor immigrant in a heavily prejudiced America, two wars, the deaths of loved ones… the Great Depression. And through all that, he used his gift of songwriting to lift the spirits of the country and show his loved ones how he felt about them.

Much of the show focuses on the process of songwriting. He discusses finding the song as if he’s going fishing, trying to “hook” the right word. A bit of conversation or a stray thought occurs to him, and he finds the word, then begins to write the song. He talks about collaborating with his various musical secretaries, shelving songs that didn’t feel ready and taking them back out — whether because the moment seemed right or through pressures outside of himself. He talks about the reason behind the songs we know and love: how “Blue Skies” was written for his first daughter, and “White Christmas” was written after the death of his infant son.

Often, as Berlin discusses writing a particular song, and the music starts to play, the backdrop of the stage itself changes. Hanging on the wall of the room is what seems to be a large but blank picture frame. However, when Berlin introduces a song, an image or scene will appear against that picture frame — the image of people dancing at a bar or a scene from Berlin’s first musical movie. It adds to the magic feeling of the creative process.

It’s impossible to separate Berlin’s heart from the process of his songwriting. Almost every song he wrote seemed to be written with love — for his family, for the business he’s in and for the country he had come to call his own. While it’s easy to imagine that the patriotic songs and movies might have been a gimmick to progress his career, Felder claimed that doesn’t seem to have been the case. According to Berlin’s daughters, he recounted, the patriotism was very genuine, which only makes the story feel sadder considering the struggles Berlin went through as a Jewish, Russian immigrant and the way he was eventually passed over by time and more popular artists.

Felder embodies the character with delightful imitations of people in his life (and even imitations of Berlin himself through different ages) and earnest descriptions of his journey. The show is at times a comedy, at times a romance, at times a success story for the American Dream and at times a tragedy. In some ways, it’s an incredibly relevant story — addressing the life of an immigrant in America — while in other ways it feels devastatingly distant from the world we live in now. But no matter what you take away from the show, you’re almost sure to have a different perspective of Irving Berlin than you did before.