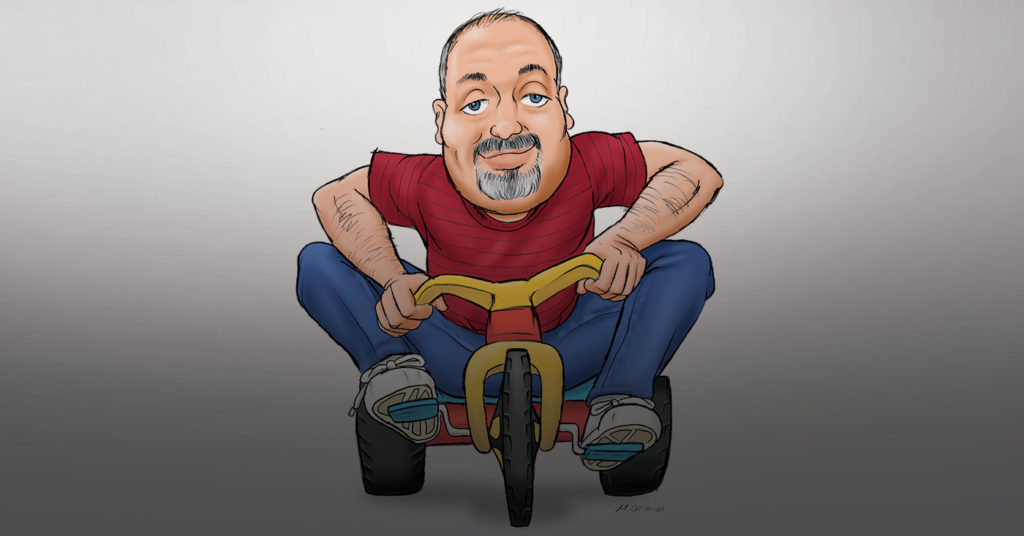 After a young Matt Holt caught his hard-working, hard-nosed father watching “The Tonight Show” and laughing at Johnny Carson’s antics, Holt was all in. “All of a sudden,” Holt recalled, “I’m seeing this man, who I always saw as a pretty stern person, laughing for the first time I ever remember. It was pretty intoxicating.” You’ll notice Carson’s influence through Holt’s casual, conversational delivery, as well. Catch him this week when he headlines The Caravan.

LEO: Was making people laugh how you stood out as the youngest of eight kids?
Matt Holt: I’m sure it helped. My parents were older by the time I came around. I think they were just tired of raising people. But, there is a misconception when you talk about big families, as though you grow up with all of these kids around. We’re so spread out, by the time I came along, it was just me and my brother who was closest to me in age. The others had gone on to school and moved out of the house. It wasn’t like kids running around, stacked three to a bedroom. We weren’t a Steve Martin movie or anything. …

Was it strange going to school functions when your parents were older than your friends’ parents?
If I’m being honest, I didn’t tell them anything about what was going on in school. It’s embarrassing to admit as an adult, but I was so embarrassed at how old my parents were. I didn’t want the other kids to see how old they were. I would have conversations with kids that would be like, ‘I think my mom went to school with your mom.’ And I’d have to tell them, ‘No, your mom went to school with my sister.’ As a kid, you’re hypersensitive to everything, and for whatever reason, at that time in my life, it was something that caused me anxiety. I’d leave the house dressed normal come play night and put on my tree costume when I got to school. I did everything as a solo project.

Your first one-man show is called ‘Thank You, Johnny Carson.’
Yeah. That one is all about why I do comedy and is mostly about my father. I was 5 or 6 years old, it was late one night, and I heard this noise down the hallway. When I got to the living room, I’m literally crawling on my hands and knees, and I peek around the corner, I see my father sitting in his chair laughing at Johnny Carson. Now, my dad worked every day of his life. Never took a vacation day or a sick day. Raised eight kids. It was a hard life. I never heard him complain about it, but I never really did see much joy from him, either. I knew my father didn’t love getting up to go to work every morning, but he had to — he had obligations. That’s what his generation was like. So, all of a sudden, I’m seeing this man, who I always saw as a pretty stern person, laughing for the first time I remember. It was pretty intoxicating.

Do you have any gigs that stand out as being particularly awful?
About 10 years ago, my buddy and I got booked for this lady’s surprise, 70th birthday party. Her son, who hired us, wanted us to roast her for a bit. We both wrote some pretty rough roast material for the gig and everything, and when we showed up, we found out that they weren’t going to introduce us as comedians. Instead, we were going to be introduced as her ‘long-lost nephews.’ We went out and did it, and no one had explained the joke to the audience. So, all of these people thought we were her real nephews, that we just showed up to her birthday party, out of the blue, to say all of these horrible things about her. After the show, people were yelling at us, and, of course, her son can’t be found to back us up. We couldn’t get our check and get out of there fast enough.