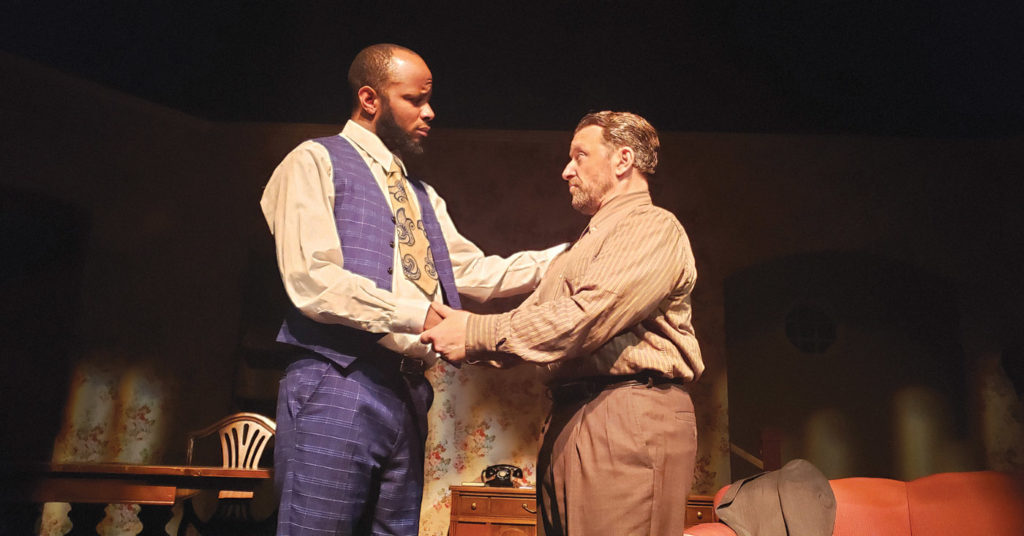 In ‘The Green Book,’ L-R: Tyler Madden as Keith, Karl Seitz as Jacob.

I suppose most of us have seen the Jim Crow signs, at least in books:

Still, it comes as a palpable shock when such signs are projected on a backdrop at the end of Calvin A. Ramsey’s powerful play “The Green Book,” which opened last weekend in a superbly executed Bunbury Theatre production at The Henry Clay (the play, from 2010, is unrelated to the current film).

Those signs are especially shocking at that point because Ramsey’s play lays bare the fact that Jim Crow restrictions around toilets, swimming pools, restaurants, hotels, bus seats, schools, etc., weren’t just about “accommodations.” They were symbols of an angry, repressive regime that was ready and eager to punish even the slightest perceived transgression with violent force.

And in that context, “The Negro Motorist Green Book,” a yearly travel guide published by Victor Hugo Green and his wife Alma from 1936 to 1966 was more than just advice for African-American road-trippers looking for safe places to sleep, eat and buy gas. It was a weapon of resistance, hope and dignity.

Ramsey sets his story in Missouri, in the private home of Barbara (Marquita Howerton), Dan (Joe Monroe) and their daughter Nina (Brittany Patillo). They’re a relatively prosperous family. Dan is an attorney. Barbara is a librarian, and their daughter is preparing to go away to college. And they’ve listed their home in the Green Book to offer safe (and free) lodging to travelers passing through.

It quickly becomes clear that this family sees Green as something of a hero. And they’re proud that one of Green’s representatives, a salesman named Keith (Tyler Madden), is staying with them as he searches out more listings in the area — though they have some concerns that Keith may have romantic designs on Nina.

That bit of romance lends the first half of the play a bit of intergenerational humor. But more importantly, Ramsey takes time to illuminate some of the ideological and intellectual tensions riffling through African-American culture during the 50s.

On the one hand, Dan and Barbara embrace progressive ideas. They’re excited about an impending appearance by W.E.B. Dubois, and they’re proponents of the thinkers at the forefront of the burgeoning civil rights movement.

Keith, on the other hand, says he’s not “a race man,” but, rather, he’s a businessman. From his viewpoint, Jim Crow is a profitable “business opportunity” that will be disrupted only by integration. Segregation, he argues, is beneficial because it ensures the success of black businesses that serve black customers — though he’s willing to make deals with racist business owners if he can profit by it. (By the way, Keith’s is a position that Victor Hugo Green opposed. As Dan points out in a discussion, throughout Green’s career he expressed the ardent hope that someday his books would no longer be needed.)

Also lodging with Dan and Barbara is a married couple: a U.S. Army captain (Louis Robert Thompson) and his wife Jacqueline (Kala Ross). The captain is proud of his uniform — proud enough that he refuses to change out of it when they depart to continue their journey, even when his wife warns him that it’s dangerous for a black man to wear an officer’s uniform in this part of the country.

The first half of the play may not be great drama in itself, but it lays the groundwork for what turns out to be an explosive second act that opens with the arrival of a problematic new guest: a white man named Jacob (Karl Seitz).

Jacob, who has a copy of “The Green Book,” is a survivor of Buchenwald and passionately refuses to stay in any hotel that discriminates against anyone — hence his plea to stay in this black-owned home, despite the legal and social proscriptions against blacks and whites lodging under the same roof.

In a brilliant narrative stroke, playwright Ramsey uses Jacob to turn the oft-used “Magical Negro” trope on its head. Jacob’s story — of being liberated from Buchenwald by an African-American soldier — begins to undermine Keith’s cynicism. And when a vicious attack brings the captain and Jacqueline reeling back for refuge, what had seemed an abstract clash of ideas becomes a blood-soaked illustration of what Jim Crow actually stood for.

This production is a partnership between Bunbury Theatre and ShPIeL Performing Identity, with support from the Jewish Heritage Fund for Excellence.

Directors David Y. Chack and Karen Edwards-Hunter have done outstanding work with a superb cast. Monroe, Howard, Patillo and Madden are splendid foils for one another, expressing their contending ideas with mercurial wit — and then deploying a deep sense of gravitas when matters turn serious. Thompson and Ross give the tensions in their relationship a fascinating, dramatic arc.

And as a catalyst for change, Seitz gives a brilliant performance, enhanced by Gerald Kean’s beautifully-crafted lighting •