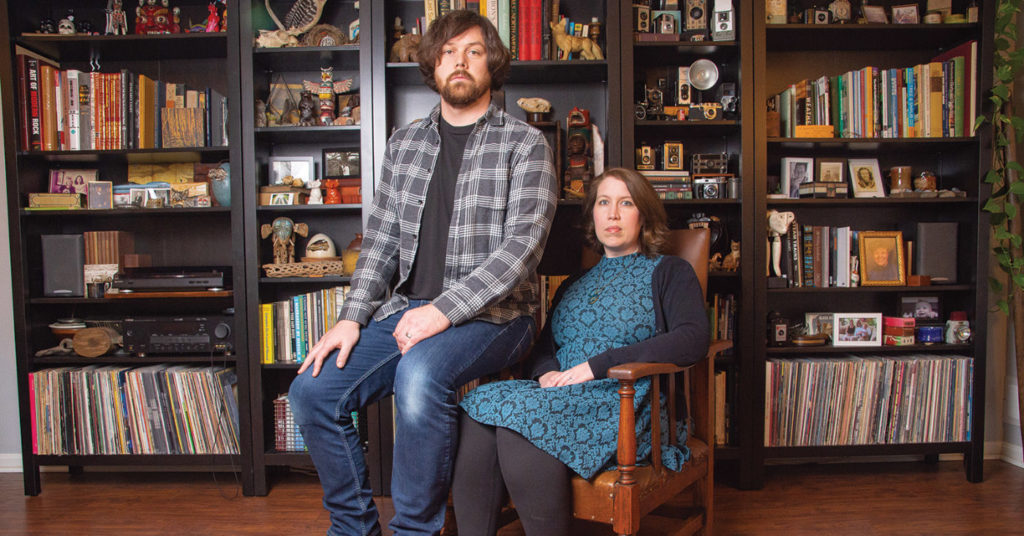 [Photos by Nik Vechery]
John Lennon, Cher, Johnny Cash and Beyoncé are singularly music legends, however, when coupled with Yoko, Sonny Bono, June and Jay-Z, they each become an unequivocal powerhouse dyad. All these artists achieved significant milestones as solo musicians, but something uniquely transformative happened when they found their creative equal and made music together. The audible yin-and-yang union is the element supplying such resonant energy. Louisville has its own dynamic duos. The musical genres they represent are diverse and determined, just like each confident couple.

Nick and Regan Layman
Black Birds of Paradise, RedTed, Future Killer, plus various cameos
Nick and Regan are one of those couples who naturally go together. They have the same even-keeled temperaments, musical dreaminess and intrinsic peculiarity. Regan plays the vibraphone, and Nick plays keys — from antique celeste to Moog synths — illustrating further their passion for the unusual. They’ve been together 12 years, seven of those married, and it all began in a Music 101 class at the UofL School of Music. They’ve been playing together since meeting and Regan said they currently “spend most days singing impromptu terrible songs, having clap ensembles, chanting phrases and musically palling around.” In describing how they work together Regan said, “[We] say some broad strokes, go away, and reap the magic. We do just as much together as we do independently, but we talk about everything and share it all with each other.” When asked “Why did you decide to make music together?” Nick replied, “Fuck. She rules. Always has. How many times do you get to be influenced by a human metronome, who rolls deep/wider/wilder/harder than you? Lemme put it this way, she gets Moondog, where I just love him.” Regan said, “Spending any time with Nick is making music. It pours out from him in all directions and always has! He never stops moving or creating! He’s my ostinato buddy.”
The key to making it work: “Presence of mind and real talk keep a love supreme.”

Laurie Jane and Cort Duggins
Laurie Jane and the 45s
Laurie Jane and Cort share a musical professionalism that is strong and confident. Laurie Jane’s lead vocals sway and twist around Cort’s bluesy guitar riffs like butter melting in the cracks of a hot corncob. They’ve been together six years and married for four. They met at a wedding where they were both booked as the entertainment. They’ve been playing music together since their first date, when Laurie Jane said she “needed a wholesome reason to get Cort back to my apartment, so I lured him back by telling him about my guitar. We traded songs back and forth, playing music for half the night.” When they decided to make music together, Laurie Jane realized, “Cort had a gutsy and wild music style, while mine was more eclectic and reserved. [Now] when we play together, Cort is able to rein in his music ferocity for the sake of the song, and I’m able to express myself more freely.” Cort confessed, “I write a lot of songs where, like a lot of male songwriters, I’m trying to be the victor/hero of the story. Sometimes, I hesitantly hand these over to Laurie and when she sings them back, the delivery is pretty humbling. It usually becomes obvious that I am the common denominator in all my sad stories. As uncomfortable as that hand off might be, it gives me a shield that allows me to be more honest in my songwriting than I’ve ever been before.” The band recently released their third LP Late Last Night — Elixir of Sara Martin, a selection of songs from prohibition-era Louisville blues pioneer Sara Martin.
The key to making it work: “When we combine our strengths, we accomplish much more than we thought possible.”

Wize and Sultra Mathematiks
Cphr Dvn
Wize and Sultra’s mission statement is “aiding in the facilitation of Earth’s ascension and spreading information about all things intergalactic and multidimensional” through the medium of “raw, grimey, indigo, hip-hop.” The universe drew them together in Oahu, Hawaii, where they were both stationed while serving in the military. Sultra said they’ve been together “20 years this lifetime, but [really] many, many lifetimes.” Music came before their relationship so it’s important to them it remains a priority. “Music has always been integrated in our life, so it’s easy, but challenging at times. Working together nowadays is Wize producing the beats, and sometimes I add on to the bass line or give him suggestions. Then, we both write. I usually end up finishing in 10 minutes or so, then I annoy him by interrupting his writing to hear what I have so far,” Sultra said, laughing. If creative conflict does occur, Sultra says it can be resolved by “Wize admitting he was wrong and apologizing.”
The key to making it work: “Being best friends and having fun while making beautiful music.”

David Bird and Tricia Cooper
Bird/Trooper
Bird/Trooper’s public persona is of a quiet, scholarly couple who would challenge a crossword puzzle author’s clue of the word parodist while drinking coffee with a nip of Jack Daniel’s. However, being as they met during a Bike Night at a Texas Roadhouse in Shively, outward appearances aren’t always what they seem. Bird’s past as an integral part of the Louisville hardcore music scene, and his tall, dark, commanding presence offset by whether he chooses to wear his prosthetic front tooth or not, made Cooper think “he looked cool as hell” when she first laid eyes on him playing in a country cover band. They’ve been together three and a half years with three of those years working on their “space folk” sound with Bird on guitar, vocals and percussion when the mood strikes, while Cooper plays synthesizers, guitar, percussion and vocals. Cooper remembered, “We were watching ‘Mad Max Beyond Thunderdome’ one night, and I made a comment about the corpse horse that Max was riding in the desert. We said Corpse Horse would be our band name. Then, we decided to be a real band instead of just making up a bunch of weird, fantasy band names.” In their desire to “make music that is organic and true” to themselves, Bird/Trooper is hoping to follow up their single release with a full LP this year.
The key to making it work: “Being tender and vulnerable and honest with each other. We are each other’s biggest fans. And Bird’s homemade soups.”

Nick and Amber Estes Thieneman
Fool’s Ghost
Nick is a person of few words, while Amber communicates with many in her professional career as a museum program coordinator. Their personalities may differ, but their shared interest in exploring haunting sounds and visuals is the gauze that binds. Amber’s calm and steady vocals combined with her thoughtful and precise keyboard playing, alongside Nick’s lulling and moody guitar, collectively delivers a dark and cinematic sound. They were introduced by a friend on Bellarmine University’s campus, where Amber was a music student. They’ve been together nine years, celebrating their eighth wedding anniversary in April. Early on, they played together in a four-piece band, but Fool’s Ghost is their first band as a duo. “Music is such a big part of who we are individually,” Amber said, “so [making music] happened naturally, especially as life shifted for us.”  When asked if they experience creative differences Amber said, “Our creative differences are typically pretty minor. If we have separate ideas for a song, during our writing process, we try both to see where it goes. Doing what makes the most sense for a song is more important than ego or having your way. We come from very different musical backgrounds, so understanding each other’s musical language can sometimes be a challenge.” When they work together Amber said it’s “very easy, relaxed, but also vulnerable and intense at times. There are layers of challenges and understanding when you are working with the person you’ve committed to be with for the rest of your life. It is unlike anything we’ve experienced through our other musical endeavors, in all the very best ways.”
The key to making it work: “Honesty and openness. We have high mutual respect and always try to be present and actively listen to each other.” •