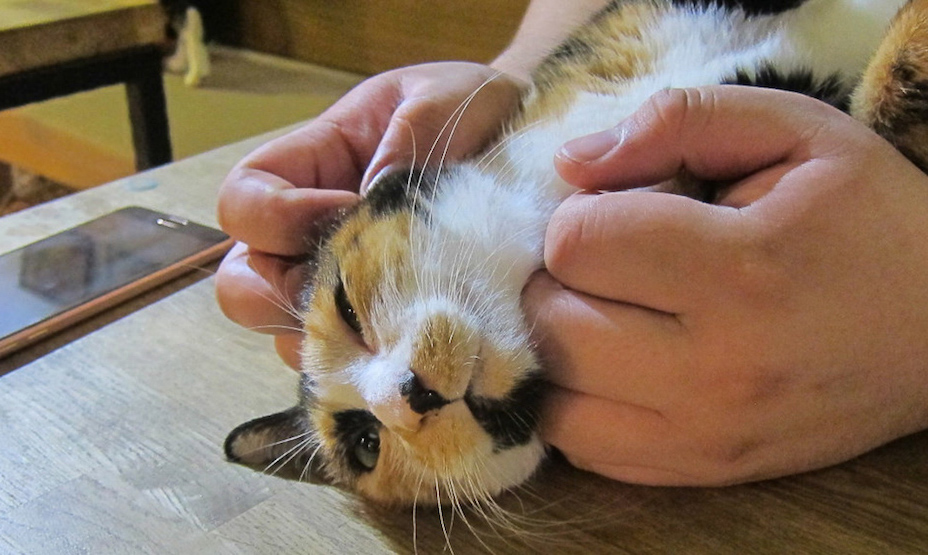 “That sucks!!! We love taking our dog there,” said another.

But the rules are clear for businesses registered as food establishments, which Kaiju and Nachbar are: Animals are not allowed inside the premises, according to the U.S. Public Health Service Food Code.

So, why did Nachbar and Kaiju get away with it for so long, allowing them to gain a reputation as pet-friendly, only for that designation to be unceremoniously stripped?

Because the Louisville Metro Department of Health and Wellness issues warnings to establishments about the law only when it receives complaints.

“Just as a practical matter,” said Dave Langdon, a spokesperson for the department. “We can’t be everywhere all the time, so the way we would, you know, enforce animals in a bar would be on a complaint basis.”

The goal of the Health Department is to protect customers from food-borne diseases that animals could transmit, said Langdon.

For Nachbar, it was an anonymous customer complaint about their bar cat, Caroline, a neighbor’s pet who often wandered into the bar.

No one complained to the Health Department about animals at Kaiju.

So, the Health Department was not the main reason for the bar’s new ban on dogs, said John McArdle, Kaiju’s general manager. As Kaiju has grown busier and started to host louder events, he and his coworkers have become increasingly concerned for the health of the dogs that were brought in.

McArdle said he also was influenced by differing feedback Kaiju has received from health inspectors over the years. Kaiju does not prepare food, but it does serve some prepackaged items and has an outdoor food truck. As a result, Kaiju was told during one visit that the bar couldn’t allow animals and, at another inspection, that it didn’t matter, McArdle said.

“After seeing Nachbar’s post, we felt like we were in a gray area, because we’ve been told different things from the Health Department,” McArdle said. “We wanted to cover ourselves. But, in a way, we had the feeling, not just me, but other employees, this might not be the best environment for dogs.”

Animals are still allowed in Kaiju’s and Nachbar’s outdoor seating areas, and service animals are permitted inside.

Animals have always been a part of Nachbar’s culture. They’ve been allowed for the entirety of the bar’s almost 12 years in business. Before Caroline, Nachbar was a sometimes-home to another wandering cat, Magic. Dogs were also an important feature of the bar, allowed as long as they were friendly, according to Burks.

Victoria Wagner, a customer of both Kaiju and Nachbar, said that the animals added to the homey feel of the two bars.

“It’s just kind of nice to have them around,” she said.

Nachbar doesn’t serve food, but customers are allowed to bring their own inside, and Kaiju has its food truck and chips. Yet, both bars are registered as food establishments with the city.

There are some exceptions for food establishments. Animals are allowed in areas that aren’t used for food preparation, such as dining areas, according to the federal food code, but there must be no possibility of contaminating food, equipment, utensils and linens.

The new rule at Nachbar might keep customers away who used to stop by while walking their pets, but Burks thinks it will be only a small hindrance for most.

Wagner plans to continue visiting her favorite bars. But she does feel as if something has been lost.

“It kind of takes that little special feeling away to an extent,” she said.

A city ordinance and a resolution, one proposed, one passed, aim to protect the integrity of historic neighborhoods.

The first targets the Cherokee Triangle district and would ban trucks over 21,000 pounds from traveling on the parts of Willow Avenue and Cherokee and Eastern Parkways closest to Cherokee Park. The goal is to increase safety on the heavily traveled streets. From 2014 to 2018, there were 116 documented vehicle crashes on those streets.

The ordinance also is aimed at decreasing road repairs. It was scheduled to go before the Public Works Committee on Tuesday.

The resolution, passed at last week’s council meeting, was provoked by construction activity in preservation districts that was harming old structures with “excessive vibration.”

It directs Louisville Metro Public Works to develop measures to protect the buildings.

The department has 90 days to provide recommendations. •