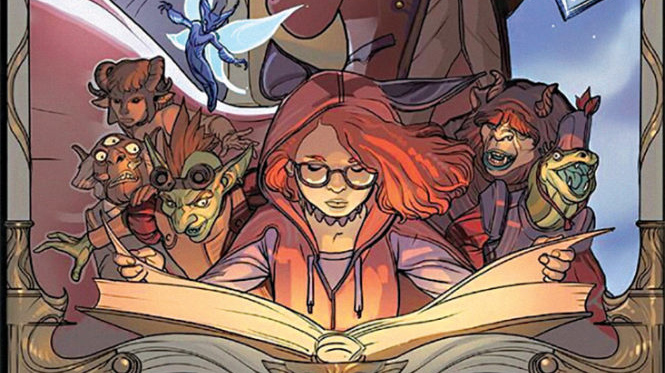 Bonnie is a bookish girl, lonely, home-schooled and with a cranky sister. When she “wins” a reward trip from her mother for acing a test, she realizes just how pitiful her social life is when she asks her librarian to go with her and is turned down because the lady is too busy spending time with her grandkids.

On her way home, she’s attacked by a monster and is saved by Oberon. He takes her to the forbidden forest and gives her the choice to go home or stay there in the fairy realm. “Mankind is so easily impressed. Simply show them the beauty they’ve destroyed, and they’ll think you a God,” Oberon thinks.

I won’t tell you her decision, but the book has set up a great story of good versus evil. I’m just not sure who’s good and who’s evil! Oberon does need Bonnie in order to reclaim his throne as King of the Fairies, and I’m sure we’re in for an interesting journey.

Ryan Parrott wrote and created the book, with help from William Shakespeare! The art is by Milos Slavkovic and goes beautifully from dark to light and warm depending on whether we’re in the realm of fairies, or Bonnie’s home. Issue No. 2 should hit the stands in March, and we’ll see where this story is going! 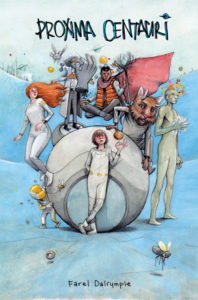 Being a teenager can be a rough time. Sherwood Breadcoat’s teenage years are currently being spent imprisoned in a timeless space sphere orbiting a dwarf star 4.243 light years away from Earth.

Farel Dalrymple’s “Proxima Centauri “is a visceral, psychedelic look into the life of a teenage boy who wants nothing more than to return to his brother and save the Earth. Sherwood spends his days salvaging side-pocket dimensions and pining over a ghostly paramour all while cursing and moping about how bored he is with his existence. Even the cosmic, multidimensional characters that swim around him only occasionally appease him.

The confusion of Sherwood’s revolving door of emotions is relayed to the reader through the energy of Dalrymple’s art. Every panel, every spread is practically vibrating as he plays with scale and texture, the pages flowing together yet leaving the reader piecing it all together. The story touches on the anxiety of being a teenager in a way where other coming-of-age stories can fall short, in that the dialogue truly reads like it was being spoken by a teenager.

“Proxima Centauri” is one of my favorite comics from last year, and I was anxiously awaiting the trade. Now that it’s out, it’s a book I’ve suggested to everyone I know who would be interested in reading something “out of the box”.

(Psst… there’s a reoccurring Easter egg I suggest keeping an eye out for.)