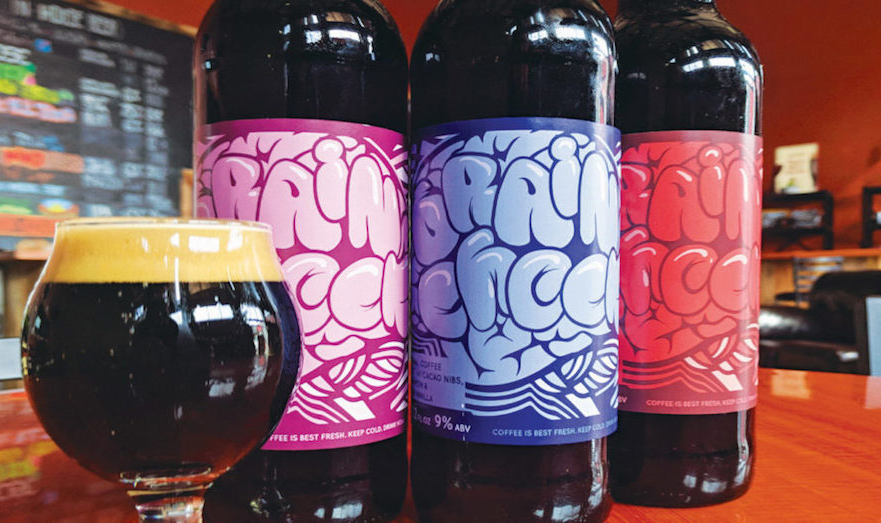 Brain Check is a beer that has existed for nearly five years, a brain child of Akasha Brewing Co.’s head brewer, Spencer Guy.

It’s based on a recipe Guy began brewing just six months after he became a home brewer. After some time spent perfecting it, the beer went on to win three straight gold medals at the Kentucky State Fair. Now, it’s coming to Akasha, in four versions, for sale in 22-ounce bomber bottles and on draft.

Friday, Feb. 22, is the official launch, with three different bottles available, as well as the original and three variants on draft, plus a special flight of four for patrons who want to sample them all.

Brain Check, a 9-percent alcohol by volume imperial stout, is brewed with Big Dog coffee blend from Bean, located in Germantown, along with Madagascar-sourced vanilla beans, cinnamon sticks from Indonesia and Haitian cacao nibs. Two additions of Nugget hops round out the brew.

“I think it’s one of the best beers we’ve ever brewed,” Guy said. “It’s a special beer. We took a lot of time to make sure the ingredients were all balanced.”

“What I like about it,” added Rick Stidham, Akasha founder and co-owner, “is you can taste everything in the beer. The flavors meld together, and they don’t get muddy.”

He’s absolutely correct — it’s a well-balanced beer in many ways, based on a preview tasting. Coffee and vanilla dominated the aroma, but take a few sips and every flavor in the blend gets involved.

The variants include Vanilla Brain Check, a version that features the base beer plus quadruple the vanilla beans; Arbol Pepper Brain Check, which adds arbol peppers to the mix for a spicy finish and Congo Brain Check, which swaps out Bean coffee for a light-roasted Congo blend from Busted Bean Coffee in Clifton. The Congo coffee is a bit more acidic, Guy noted, bringing out flavors of berries and citrus.

The Arbol version is the one that stood out during the tasting; Stidham said it is his favorite of the four versions of the beer.

“I’ve always loved those coffee imperial stouts that have a little spice thing going on in the background,” Guy said

He said the brew day for Brain Check was indeed that — a full day, plus, thanks in part to the need for three separate mashes to make the amount needed. He said about 360 bottles total will be for sale, plus there are kegs for draft sales beginning on Friday. He said he showed up to brew one morning at 7 a.m. and didn’t leave until 8 a.m. the following day.

It was the first time he’d scaled up the recipe for a large batch, which also took some time. He wanted the flavor to be just like the beer he’d won gold with thrice over, so putting in the extra time — a true, full-day’s work — was a no-brainer, if you will.

“I put my heart and soul into it,” Guy said, chuckling.

Of the 10 barrels of Brain Check brewed, the 25-year-old brewer said, two will go into bourbon barrels for a future release.

The day after you have a flight and grab a bottle at Akasha, hop over to Holsopple Brewing in Lyndon to help celebrate the brewery’s second year in business. On Saturday, Feb. 23, the Misty Mountain String band will play and WeekEnd Burgers will serve food. The fun begins at 7 p.m.

The Tailspin Ale Fest got a bit of an assist from the weather this year, a nice blessing given it was the first version of the nationally-acclaimed beer festival to be held entirely outside (under tents). It was sunny and cool, but not frigid, and the airplane-themed festival apparently didn’t need to be held inside a hangar to be successful.

The beer lines were quite manageable (although the lines to the toilets could be a bear), the silent disco, with people dancing to music only they could hear, was a sight to behold, and, of course, there was good beer at every turn. One of the eye-openers for me was Country Boy Brewing’s Lucius Clay Golden Stout, a beer that looked like an IPA but smelled, tasted and drank like a coffee stout. I also helped myself to seconds of Black Ops, a bourbon-barreled imperial stout from Brooklyn Brewing Co.

Less than a year to wait now for the next Tailspin. The clock is ticking.