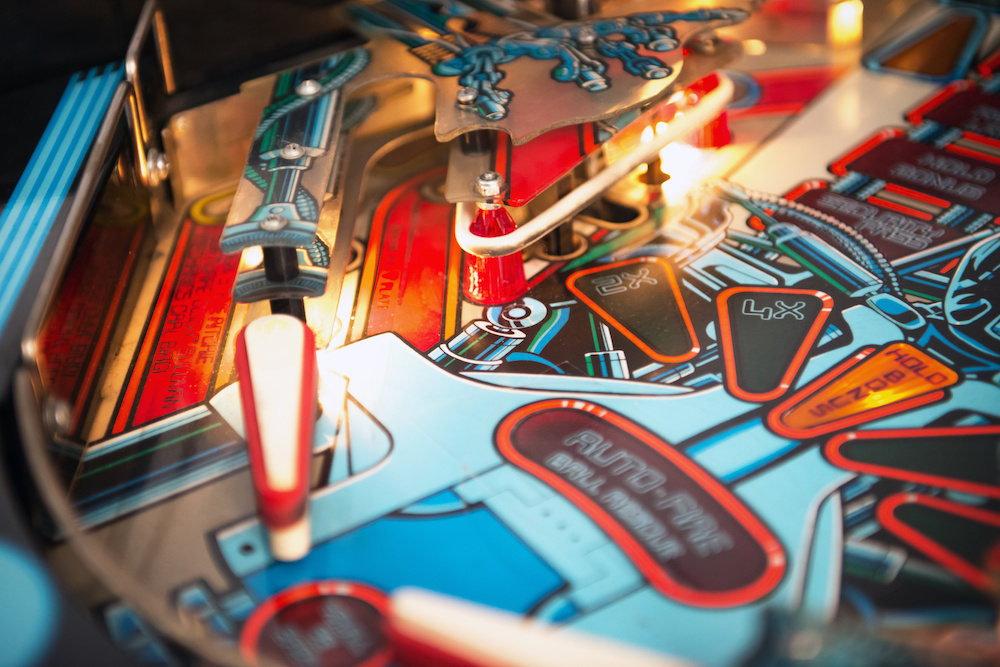 I’ve been collecting old arcade games and pinball machines for a long time. My brother and I opened Zanzabar, a music venue/restaurant/arcade more than 10 years ago, which we wanted to kind of be like our dream house from when we were kids in the ‘70s. Flash forward: I think we are creeping up on 250 games in our collection. I’ve been attending arcade and pinball events every year since Zanzabar opened. Here are three pinball machines that I recommend playing at the 2019 Louisville Arcade Expo, as well as three I would like collectors to bring.

Games that will be there

1) “Slick Chick”: This is a single player Gottlieb Wedgehead pinball machine made in 1963. It’s a game that may get overlooked, being single player — but, please let me tell you how satisfying and fun this game can be. The layout is amazing, and the game can actually be really fast depending on its condition. In the collector community, this is a very sought after title. You’ll see, because you’re lucky enough to have it at the Expo.

2) “Flintstones”: Don’t judge a pinball machine by what its based on — this game is a blast! It’s a 1994 Williams pinball machine that I find myself playing over and over at every event I attend. Seems cheesy, and, well, maybe it is — it’s fun as hell though.

3) “Blackout”: This is a 1980 Williams pinball machine, and when you get to Blackout Mode during gameplay, it’ll blow your mind. I love this game, and I’m really happy it made the list. This game has a lot of the traditional Williams arcade game sounds in it, every time I play it, all I think is — Joust, Robotron, Defender!

Games I hope are there

1) Jersey Jack Pinball “Pirates of the Caribbean”: This game is a gorgeous piece of artwork. I’ve watched it evolve over the last few years, and I believe it will go down in history as one of the best games of its era.

2) Team Pinball “The Mafia”: I had the privilege of playing this game — with no lines — at a previous expo in a different city. I’m crossing my fingers that this tiny pinball company from Cardiff, in South Wales, has the chance to show everyone what they created at The Louisville Arcade Expo.

3) Wico “AF-TOR”: Wico Corp. from Chicago, back in 1984, made this wonderful, wide-body pinball machine. It’s rare and not often seen in the wild. This game is one of those haunting games that kept calling to me at the last event I attended. I’m really hoping one finds its way to Louisville Arcade Expo, just so I can see if it has the same impact on the Louisville pinball community.

Antz Wettig is the co-owner of the restaurant/music venue/arcade Zanzabar and is working to open a laundromat with a bar and arcade called Bar Of Soap.