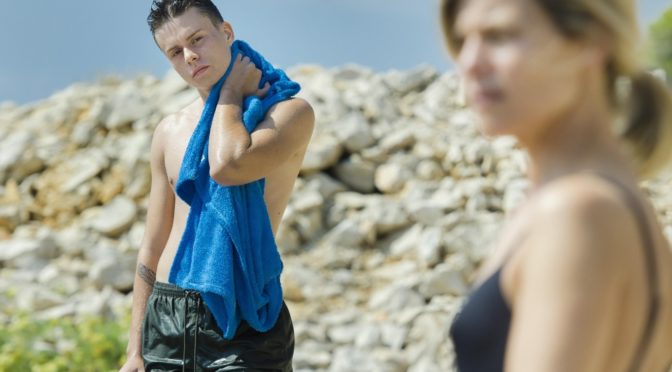 'The Workshop' or 'L'Atelier,' one of movies showing this week as part of UofL’s ongoing French Film Festival.

JR X TIME: ‘Guns in America’ Screening and Discussion
21c Museum Hotel
Free  |  6-8 p.m.
The organizers of this event want your opinion on guns. So did Time Magazine and the award-winning artist JR. They interviewed people with feelings about firearms that fell across the spectrum. Their voices have been compiled in a video mural that will be displayed at 21c. The installation will serve as a conversation starter, led by Kate Howard, managing editor for The Kentucky Center for Investigative Reporting. “This is not a discussion about polity or politics, but an opportunity to listen and share personal experiences and feelings about guns in America, in a safe, honest, and open environment,” reads the event description.

French Film Festival
The Floyd Theater — UofL
Free  |  Times vary
Two movies will be shown this week as part of UofL’s ongoing French Film Festival. The first is “Boy Meets Girl” on Tuesday at 8 p.m., a 1980s cult film about a 22-year-old man living in Paris whose girlfriend leaves him, only for him to run into a girl from rural France who was just separated from her boyfriend. On Thursday at 5 p.m. and 8 p.m., audiences may catch “The Workshop” or “L’Atelier,” a movie about another young adult, Antoine, who’s been selected, along with other underprivileged youth, to help a famed crime novelists pen a thriller.

Organize Your Own: A Cultural Dialogue
Hite Art Institute —UofL
Free  |  5:30-7 p.m.
“Organize Your Own” is a traveling art exhibit about rallying against racism, just as The Black Panthers and The Young Lords did in the 1960s. Curator, Daniel Tucker, will take attendees through the exhibit in an interactive discussion. Stick around for an open mic where participants will discuss their own fight against racism.

Games on Tap
Great Flood Brewing Co.
No cover  |  6:30-10 p.m.
This weekly board game meetup is for tabletop gaming enthusiasts and novices. Arrive anytime, choose from over 50 games (or bring your own), grab your drink and settle in for some fun. As the Games on Tap Facebook page puts it, “come for the games, stay for the booze…or vice versa.”

Falls City Taproom Book Club: ‘Catch-22’
Falls City Taproom
Free  |  7-8:30 p.m.
This event does not live up to its name: “Catch-22.” A beer-and-classics book club is more of a win-win. The third Wednesday of every month the Falls City Book Club gathers to revisit classic literature. This month’s book is “Catch-22,” which was first published half a century ago.

Spoken Word with Kai Davis
Spalding University Library
Free  |  6:30-8 p.m.
Hear from Kai Davis, a writer and performer from Philadelphia whose work, as a queer woman of color, touches on race, gender, power and sexuality.

Fool’s Ghost / Okapi / Sheri Streeter
Kaiju
$5  |  9 p.m.-midnight
Enjoy three bands: Fool’s Ghost, a Louisville duo, just about to embark on tour; Okapi, another duo, this one from Asheville, North Carolina, and specializing in avant-garde rock; and Sheri Streeter, a Louisville singer-songwriter with a unique style.

Margarita Day Party
Copper & Kings Distillery
No cover  |  8-11 p.m.
The margarita is one of the world’s most popular alcoholic beverages (sixth in 2018, according to Drinks International). It’s tasty, fun and usually pretty strong. Copper & Kings is celebrating the drink (thought to be created in either Mexico or Southern California) with salsa dancing and lessons, cuban food (available for purchase) and a drink list that will definitely contain margaritas.

Wizard & Wands Bar Crawl
Fourth Street Live!
No cover  |  9 p.m.-midnight
Dress up like Harry Potter or Hermione (or any other fictional wizard — this event isn’t specific) and enjoy drinks at The Sports & Social Club and Tavern on Fourth. There will be lookalike contests, prizes (including a $300 gift card), “wizardly tournaments” and themed, $5 drinks.