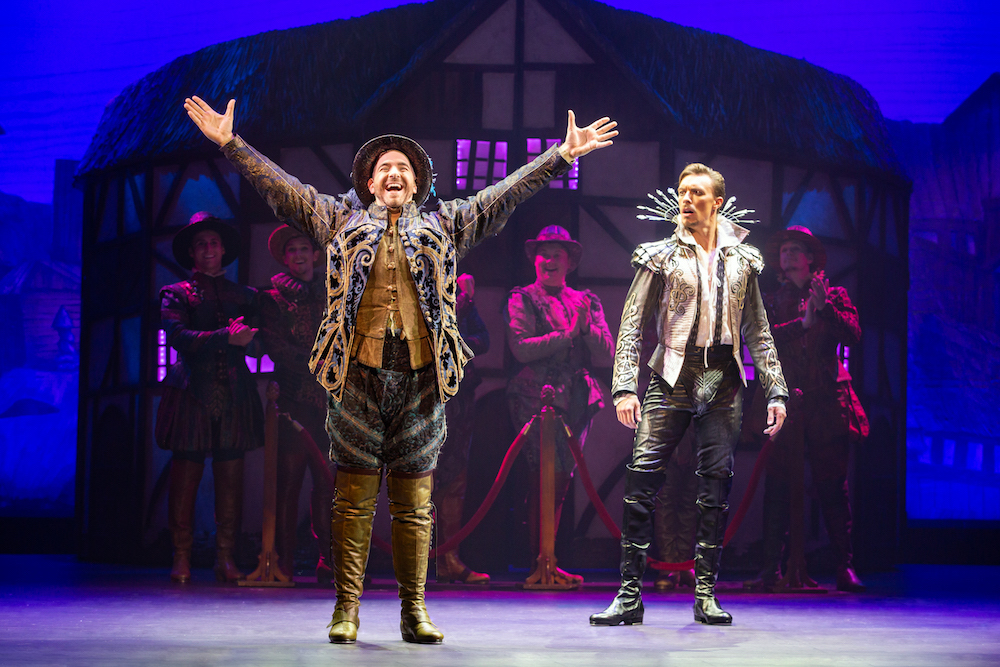 Arts Bureau Edge, a youth arts journalism initiative, brought five young critics to the press opening of “Something Rotten!” at The Kentucky Center, with the help of PNC Broadway in Louisville. This effort is the fourth since Arts Bureau Edge began in June with a mission to give young people experience in writing about the arts and give them a voice in the community.

High school students from duPont Manual and Floyd Central attended workshops on review writing and musical theater history and helped critique each other’s work. Passionate about writing and keenly aware of the current musical landscape, the students shared playlists and future plans for theater-going. Some of them came after work or from after-school activities, but they never lacked energy or enthusiasm. It was awesome.

Elizabeth Kramer and Frances Ward-Simmons founded Arts Bureau Edge. I came on as a volunteer during this session and can’t wait for the next. Special thanks to Matthew Porter at PNC Broadway in Louisville and Keith Stone and Scott Recker of LEO.

A musical that takes risks with vulgarity is ‘Something Rotten!’
By Audrey Boyd
Floyd Central High School, sophomore
If you enjoy a never-ending supply of sexual innuendos and double entendres, or perhaps even the two intertwined, then this is the show for you. It’s as if Bo Burnham was thrown into the Renaissance, but instead of rapping there are tap routines.

“Something Rotten!” opened Tuesday and runs through Sunday at The Kentucky Center.

The musical follows a tale of two brothers, Nick and Nigel Bottom (Matthew Michael Janiesse and Richard Spitaletta), who are struggling to write the next big play at a point of history when Shakespeare overshadows all else. It takes a new approach to The Bard, played by Matthew Baker, painting him in the light of an arrogant rockstar rather than the stingy poet the general population sees him to be. His frilly neckpiece is replaced with skin-tight leather, and his famous sonnets are backed up by electric guitars.

The entire production is not what you would expect. Mature sophistication seems to never have been heard of in this universe; instead, you’re met with mature in the more vulgar sense (so perhaps don’t bring your “Macbeth”-loving grandmother). But somehow, it works. It’s incredibly self-aware, and uses this to the show’s comedic advantage.

Arguably, the best running joke throughout is found in one of the most stoic characters: Brother Jeremiah (Mark Saunders). He provided a nonstop stream of sexual innuendos.

This show takes risks in its story above all else, and the end product makes you glad they did. I wholeheartedly believe that, if the Bottom brothers could see this hit of a musical, you know they would be proud.

‘Something Rotten!’ show-stopping crude fun
By Madison Hayden
duPont Manual High School, sophomore
Set in the 1580s in Renaissance England, when being a popular playwright was like having millions of Instagram followers, “Something Rotten!” tells the story of the Bottom brothers, Nick and Nigel. The best friend brothers are trying to keep their local acting company from falling into ruins and make it out of the shadows of the notorious William Shakespeare (Matthew Baker). “Something Rotten!” by Stephen Gabriel opened Tuesday at Kentucky Center and is a deep, belly-chuckle kind of Broadway performance.

But somehow, like an overstuffed omelette, “Something Rotten!” still offers some insatiable satisfaction amid the codpiece-overrun stage and Black Death-infested Europe. The score has an excellent opening number (“Welcome to the Renaissance”) and a literal first-act showstopper in “A Musical,” with music and lyrics by brothers Wayne and Karey Kirkpatrick.

There’s also a nod to feminism with Nick’s girl-empowerment-driven wife Bea (Emily Kristen Morris), who sees nothing wrong with breaking societal gender stereotypes and working outside the home. “It’s the ’90s,” she tells him. “There’s a woman on the throne.”

Along with the topic of sexism and women’s rights, “Something Rotten!” hits hard on several controversial and modern-day problems. Slices of homosexuality, religious intolerance, drugs and drinking are all present in the play, of course in a joking manner.

In “Something Rotten!”, the use of space on stage provides a real life visualization of one of the most creative times in history. Several layers of backdrops, ranging from really portrays the time period and societal factors very well. The costumes provide a 360-degree range of cultural experience: from codpieces, leather boots and ruffs, every aspect is spot on.

It is hard to keep from singing along to the music scores (I heard several audience members who couldn’t refrain from singing or humming). The actors portray their characters persona spectacularly. The lights sync with the music to provide emphasis when necessary. The backdrops and props threw you all the way into the medieval experience. If you’re looking for a good time — oh, that ole thing — there’s plenty, from top to bottom.

Flamboyant ‘Something Rotten’ struts its stuff
By Cole Tanner
Floyd Central High School, senior
Much in the same way the flamboyant “Something Rotten!” character named William Shakespeare — played like a rockstar in a silver leather jacket — swaggers across the stage in the opening number, this musical struts through its kickoff of “Welcome to the Renaissance.”

“Something Rotten!” opened Tuesday at The Kentucky Center and closes Sunday.

From the offset, the audience was dazzled by the colorful, intricate costumes and coordination of the ensemble cast members, as they sang their way through a jazz-laden period number, which sets the scene for the show to come. What follows is two hours of puns, double entendres, alliteration and all manner of wordplay worthy of the Bard.

The show follows the story of the Bottom brothers and their quest to write a hit show in order to escape obscurity and bankruptcy. The elder brother, Nick Bottom, struggles against his adversary, William Shakespeare. As this goes on, however, the heart of the show lies with the younger Nigel Bottom in his plot of finding love with a sheltered Puritan woman named Portia.

By the end of the show, much of the musical falls under the weight of all the jokes regarding originality — or lack thereof, as so much of the debate surrounding Shakespeare goes. Then there is the flippancy with which Renaissance Europe is treated, and song and dance numbers about the nature of musicals.Parallels abound to the likes of “The Book of Mormon” and “The Producers;” the show is one that fans of either should enjoy.

Now, one may be thinking, “God, I hate Shakespeare” when first hearing of  “Something Rotten!” — a musical about The Bottom brothers, who are competing against Shakespeare during the Renaissance. But that won’t be the case after seeing the production.

“Something Rotten!” hit The Kentucky Center on Tuesday and runs through Sunday. The show originally opened on Broadway in 2015 and started its current tour last year. The show is directed and choreographed  Casey Nicholaw, who has also worked with Broadway hits like “The Prom,” “Mean Girls,” “The Book of Mormon” and many more.

Set in the the 1590s, the Bottom brothers, Nick (Matthew Janisse) and Nigel (Richard Spitaletta), are scurrying for ideas when one appears out of thin air: musicals!

In this production, the character of Shakespeare (Matthew Barker) certainly was an eye-catcher — and not just because of his silver leather outfit. Barker gave this role pizzazz and cockiness like Broadway star Christian Borle (who won a Tony award for his role as Shakespeare in “Something Rotten!” on Broadway and another for his performance of  Black Stache in “Peter and the Starcatcher”).

One small ear-catching performance was the clarinet solo played by Michael Witsberger before Nigel begins “To Thine Own Self” (Reprise). The slurring and grace provided when playing the quaint little solo was smooth and clear as crystal. It was a nice little orchestral moment that stood out from others.

If “The Book of Mormon” or other slightly inappropriate shows is one’s preference, then this show fits. With funny and dirty humor, everyone of all ages will be snickering at these innuendos and quick cracks. So be fast to catch the shenanigans of the Bottom brothers.

‘Something Rotten!’, an uproarious comedy with nod to ‘The Book of Mormon’
By Lily Wobbe
duPont Manual High School, freshman

“If you want to be great, then you’ve got to create a musical!”

In the musical “Something Rotten!”, this advice comes from fortune teller Nostradamus. The musical’s composers Wayne and Karey Kirkpatrick certainly took their own advice to heart when writing this hit Broadway musical.

“Something Rotten!” opened Tuesday at The Kentucky Center. A praiseworthy musical experience, it’s appealing to audiences interested in musical theater and Shakespeare and to those looking for just a good laugh. It opened on Broadway in 2015, and it’s no surprise that it’s still popular today — its riveting dance numbers and uproarious comedy are perfect for mature  audiences.

“Something Rotten!” may appear old-fashioned with its period-appropriate Renaissance set and costumes, but from the very first number, “Welcome to the Renaissance,” it’s clear that the audience is in for a thrill.

The show opens on Nick and Nigel Bottom (Matthew Michael Janisse and Richard Spitaletta), and their attempt to write a play great enough to challenge Shakespeare. They quickly discover this will be a difficult feat, with Nick eventually turning to a fortune-teller Nostradamus (Greg Kalafatus) for inspiration. By the end, the full cast is doing kick lines dressed as omelets. With perfectly timed humor, nonstop action and true love, the show had the audience’s attention from curtain to curtain.

To any frequent theatergoer, a clear stand-out is the show’s references to other Broadway musicals. Among the shows directly referenced are “Phantom of the Opera,” “Sound of Music,” “Rent” and many others. The show keeps audiences guessing which of their favorite Broadway shows will be referenced next. Also, despite it being set in the Renaissance, John O’Farrell’s and Karey Kirkpatrick’s joke-filled, Tony-nominated script had the audience laughing wildly.

Tony award-winning choreographer Casey Nicholaw — who directs “Something Rotten!” — has a “Book of Mormon” moment in act two. It features sparkle-vested, singing and dancing Puritans. In any other show, tap dancing eggs would seem peculiar, but Mr. Nicholaw’s eccentric quirks are seamlessly woven into the show..

The show goes out with a bang by reprising the iconic opening number, but this time with the lyric “Welcome to America,” leaving the audience in high spirits.