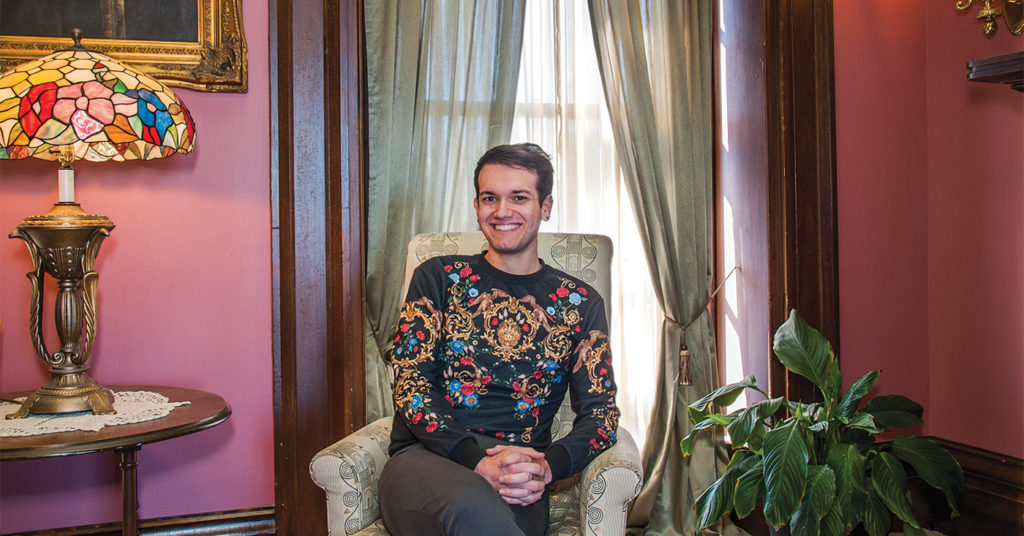 This article is part of the 2019 Winter A&E Guide. To read the rest of the section, click here.

Alex Roby stands on the stage of TheatreWorks of Southern Indiana in a baseball uniform and wailed, “My unfortunate protuberance / Seems to have its own exuberance.”

It’s one of the many quirky and curious lines in the musical “The 25th Annual Putnam County Spelling Bee,” which Roby has been rehearsing since November. Opening night is just over a week away, and the 27-year-old actor said the show is in excellent shape.

All that’s missing is… an audience.

“Spelling Bee” will cap off an extraordinary 12 months for Roby, who has participated in no fewer than six shows, not including “Spelling Bee,” since moving back to Louisville in 2017. That’s remarkable for a new guy to town and only proves that he is unequivocally someone to watch in the seasons ahead.

He planned to work as vocal coach.

Once he completed school, he did teach as he had planned for a while but couldn’t quite settle into accepting it as a career. “I realized I was going to have to make a lot compromises if I wanted to make a living off of teaching,” he said. “Those compromises were making me hate the thing I loved.”

Roby consequently decided to move back to Louisville to see if he could reenter the performance side of his passion.

Before he arrived back in town, he reached out to local theater company Acting Against Cancer, which was just beginning its rehearsal process for the 1980s jukebox musical “Rock of Ages.” (I am executive director of AAC.) Roby was cast as featured ensemble and found himself once again immersed in the world of musical theater. He got a day job as a data analyst at Invesco and began to navigate the tricky balancing act of working a full-time job while rehearsing a show.

‘Nothing I’d rather be doing’

Indeed, most local actors do not get paid, so Roby essentially found himself working in some capacity 12 to 14 hours per day without financial gain. But it’s always worth it.

“Even though there are times when it’s hard, there’s nothing I’d rather be doing when I’m not at work,” he said. “Doing musical theater has helped me meet people who are now some of my closest friends, while also allowing me a musical and creative outlet, which I no longer get from my day job.”

Roby’s dedication to the craft did him well.

Roby actually did this show in high school but was more than ready to revisit it, so when TheatreWorks announced its November auditions, he ensured he wouldn’t miss it. “I had done a cabaret at TheatreWorks a year ago and got to meet some of the people over there,” he said. “They were super nice, and I’d been looking for an opportunity to go work with them. And I just love ‘Spelling Bee.’”

He auditioned for the role of Chip Tolentino, a baseball-playing boy scout and the bully of the spelling bee. It’s not the role Roby played previously, but the character’s songs fall in the upper register of the male voice, which, when set to the pop score, was exactly what Roby studied at Belmont.

After a callback, Roby was awarded the role and immediately began rehearsal — while in the final weeks of “Mamma Mia!” no less. First step: music rehearsals. “Traditionally for a musical, you start with music rehearsals and learn all the vocal parts for all the songs so that you already know them for the choreography and blocking,” he explained. “And then typically, you would learn choreography next and then you block the show and then run it to death until you open!”

With what Roby described as an extremely talented cast, rehearsals have moved quickly, and the show developed more rapidly than they sometimes do. “We got through all the music very quickly, which is nice, especially in a small show like this. Everyone has to carry their own weight, and the cast is so great. Everyone is really good as their characters — like brilliant.”

Singing-wise, the role is a dream for Roby.

“There’s a song called ‘Chip’s Lament’ that is so funny and so fun to perform — I don’t really want to give away anything else about that particular number but it’s pretty hysterical,” he said, laughing. “And then I also get to lead one of the big group numbers, ‘Pandemonium,’ which is one of my favorite musical theater numbers of all time because it is so fun and funny in the context of the show. I love the songs I get to sing in this show also because they’re so high and very much that pop tenor sound that I’m really comfortable with.”

As Roby is indeed a confident singer, Chip’s stratosphere songs weren’t anything he would flinch at, but there is one aspect to the show and theater in general, that intimidates him: acting.

‘Using my dog as a scene partner’

“I’m definitely a singer first and then, way down the list, I’m a mover second and an actor third,” he admitted. “Acting, in general, is still very intimidating. It was never really my strong suit when I was in high school, and I had always just focused on my voice. So it’s still intimidating to me to tackle scenes and not be Alex when I’m supposed to be a character.”

Over the course of rehearsing, “Spelling Bee,” however, Roby has pushed himself to grow more. When it comes to memorizing lines or nailing choreography, he knows what he needs to do. “I’m the kind of person who will just run it over and over again in my living room until it sticks, using my dog as a scene partner,” he said of his own rehearsal process.

And because of the stellar year behind him, his ability and confidence as an actor have seen incredible development. “I’ve been required to act a little bit more with every show I’ve done over the last year,” he said. “Even with the ensemble roles I’ve done, I’ve been able to really play up various different characters. I’ve also had the opportunity to watch a lot of good acting and watch a lot of different directors work with actors — I’ve picked up a lot of things from each one of them.”

Directors are, of course, integral to the process, and having worked with several, Roby has a good idea of what qualities he looks for in a strong leader. “The thing I appreciate most in a director is the ability to manage time wisely,” he said. “If you can effectively run rehearsals, I’m going to trust that the product you put out is going to be pretty decent. And I like it when directors are just generally nice and can also handle their stress.”

Fortunately, Roby said, the director, Jason Roseberry, has been a tremendous leader, helping Roby and the cast work cohesively. “Jason’s been a very fun director to work with,” he said, “and he’s someone who really will let the production evolve and grow into what it’s supposed to be.”

The feeling is certainly mutual. Roseberry, who also serves as the executive director of TheatreWorks, is overjoyed to have Roby in the production. “Alex is a professional, and his voice goes on forever,” Roseberry said. “He brings lots of ideas about his character to the rehearsal process. A performer like Alex who is extremely talented and kind is just an absolute joy to work with.”

Warming up with Ariana Grande

Now that the music, choreography and blocking have all been taught, the “Spelling Bee” crew is just about ready to open. “I’m feeling really good as we get closer to opening,” Roby assures. “We’re just cleaning up the show, adding in all those little details, all those little character moments that really make it funny but still a show with heart.”

This coming week is tech week, which means lighting, sound, costumes and props are integrated into the show. It can be stressful, but once the night of Feb. 6 hits, the great majority of the work is done. While some actors may continue to fine-tune their work over the course of opening weekend, Roby remains confident that once the show’s up, the prep work is over.

He, of course, continues to improve with each night, but he doesn’t spend show days poring over the score. “I don’t do any kind of prep really once the show’s open,” he said. “I just like to go in with a clear head. I usually will blare some really poppy music on my way to the theater to get me amped up. Like, I’ll sing along full-out to some Ariana Grande — that’s my warm-up for shows.”

“The 25th Annual Putnam County Spelling Bee” will see 10 shows over the course of its two-week run.

What’s next for Roby?

He’s not so sure.

He knows he will miss this character and this process but hopes to maybe one day do the show again for a third time, possibly going out for yet a different character.  “I really enjoy the community as a whole,” he said. “It’s a fun and talented group of people. And really the thing that makes me keep coming back is that companies are producing really great shows in Louisville. Each company has their own style of shows that they pick, so it’s fun to get to do a variety.”