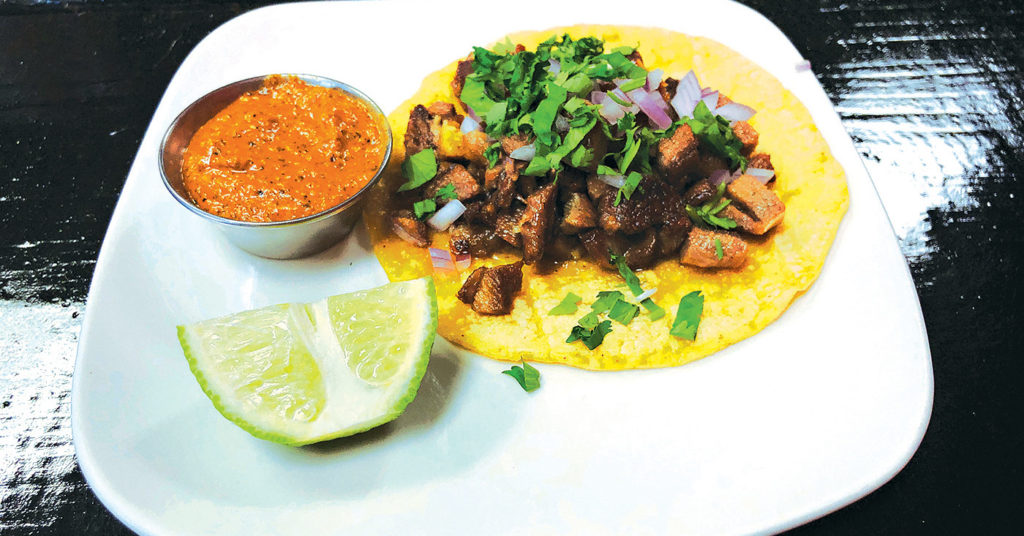 A couple of weeks ago, I started getting glowing reports from friends and readers who urged me to check out a new, little, South End Mexican breakfast spot called Chilakiles.

But when I asked Google to search, Google fought back.

“Did you mean: chilaquiles?”

Google didn’t believe me! I say “Chilakiles,” and Google says, “Chilaquiles.” Let’s call the whole thing off? Nope, can’t do that. It sounded too good.

So I persevered and finally got through, discovering in the process that there are apparently only three restaurants in the world that spell chilaquiles with that funky K— a trendy eatery in Playa del Carmen on the Mayan Riviera; a street-food stand in Mexico City; and this sweet, new eatery in a short strip of shops on National Turnpike, just a block or two out from Southside Drive.

Chilaquiles, aka chilakiles, are a classic Mexican breakfast treat: fried eggs perched on cut-up, fried tortillas and topped with spicy salsas. Chilakiles, the restaurant, offers a breakfast-heavy menu, too, although you’ll also find plenty of lunch and dinner options available throughout its service hours from 7 a.m. to 10 p.m. There are specialty drinks including margaritas to wash them down, a mission that Chilakiles apparently inherits from its predecessor in the space, an all-day, Latino bar called Margarita’s.

The room is quite large and striking in appearance, with bold red walls the hue of watermelon aqua fresca. Heavy wood tables painted glossy black are set with simple black and orange diner chairs, with a long bar stretching around a back corner.

The breakfast and brunch menu offers 16 morning-friendly entrées, ranging from $7 (for egg-topped tortilla entomotadas or egg and black-bean enfrijoladas) to $15.50 (for spicy pepper-and-onion-topped steak Oaxaqueño, reflecting the owners’ roots in Oaxaca in Southern Mexico).

The dinner menu includes a half-dozen appetizers from $6.50 (for a veggie or chicken quesadilla) to $9 (for shrimp nachos or guacamole with roasted shrimp). Ten dinner entrées range from $9.50 (for enchiladas suizas) to $15.50 for steak Oaxaqueño again. It’s a fixture throughout the day, as are a couple of variations on chilaquiles. A short list of sandwiches is available all day, for $9 (for a torta Cubana) or $9.50 (for a carnitas pork sandwich or Mexican hamburger).

Mary and I dropped in early on a Saturday afternoon and apparently missed the lunch rush, which made for a quiet environment and left servers plenty of time to practice their English on me while I practiced my Spanish on them, making us all happy. (Be assured that staff is bilingual, but if you habla un poco Español, now’s your chance to work on it.)

We started with a couple of appetizers and were happy with both.

Papas bravas fritas ($6) made a hearty opener: A sizable bowl loaded with long, thick-cut fried potatoes tossed in a spicy chile seco pepper-lime sauce. The sauce imparted a seductive hot-sour flavor to the fries, making them so tasty that I really didn’t mind that it also made them limp. The queso fresco Mexican cheese mentioned on the menu seemed to have gone missing, but I didn’t mind, as the spicy fries were just right.

Tacos aren’t shown on the menu but were highlighted as a special on a board out front. We tried a lengua taco ($2.50), served Mexican street style, with chopped, raw onions, abundant cilantro and a lime wedge atop chopped beef tongue on a soft, fresh-made, corn tortilla. It was good, mostly, but the skin had been left on the tongue meat, an idiosyncratic treatment that diminished its texture and flavor. Next time, carnitas!

One of the namesake dishes, Chilakiles Suizos ($7.50) hit the spot. A large plate was loaded with corn tortilla triangles that had been sautéed with onions and garlic and spicy jalepeño-tomatillo sauce until they were soft and chewy. They were plated with crumbled queso fresco and two eggs fried over easy on top, with pink pickled onion slices and minced cilantro for garnish. This rich, heavy breakfast can get your weekend motor running.

Pollo rostisado ($14) was a simple, appealing chicken dish. A halved, roasted chicken was painted with a bright-red, taste bud-tingling, but not too fiery, guajillo pepper sauce that paired nicely with the dark, pleasantly gamey meat of what seemed to be a pastured chicken. It was plated atop a huge ration of excellent mashed potatoes, fluffy and rich, and three fat stalks of grilled asparagus with the stringy feet left on.

Our hearty lunch came to a very reasonable $34.45, with an $8 tip for our friendly, helpful servers, who graciously managed not to laugh at my Spanish.

Noise level: It was a quiet scene with few tables occupied during a quiet late lunch; try it again on a busy weekend night, and you may find it louder. (Average sound level 65dB.)
Accessibility: The entrance is accessible to wheelchair users, but the men’s restroom is not equipped for disabled patrons, and the grab bars in the women’s room are placed too high to reach.