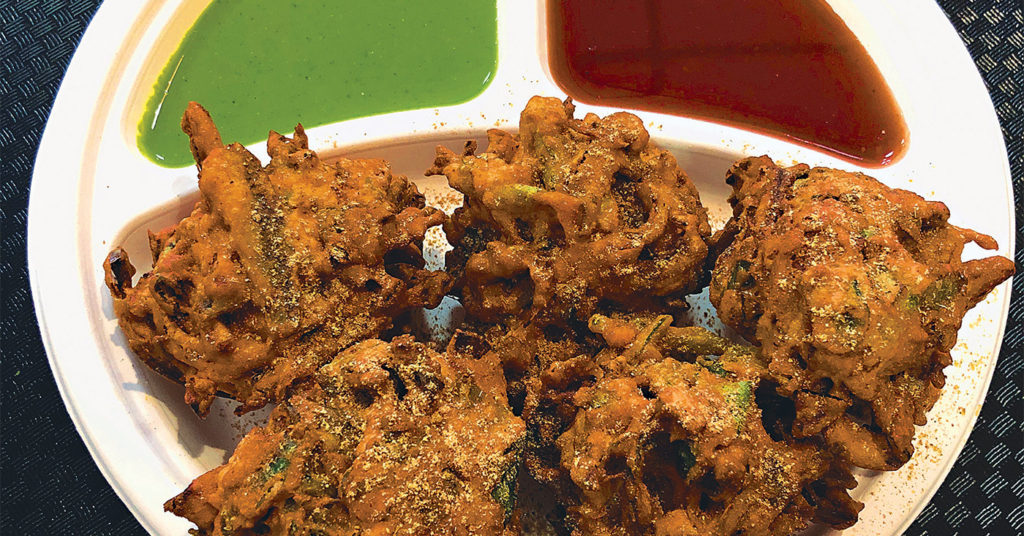 Even if you think you know something about Indian food, the chances are that the first time you see the menu at Shreeji Indian Vegetarian Street Food, you’re going to be bewildered by a lot of names of dishes that you don’t recognize at all.

Only seasoned travelers or natives of the subcontinent are likely to be familiar with such deliciousness as vada pav, dabeli, methi gota, or bhel.

Not only will the friendly people behind the counter explain it all for you, but even if you simply dive in and choose at random, you really can’t go wrong. It’s all delicious, bold, aromatic and colorful — so good that you won’t regret any choice you make.

Although a few of the city’s many Indian restaurants have offered us a taste of Indian street food, Shreeji is the first to focus entirely on this fascinating genre. Also known as chaat, from the Hindi word for “lick,” these intriguing and varied, snack-size goodies may be crunchy, tangy, hot or sweet, and sometimes all at the same time.

And now we’ve got it, and it’s so good that I’m scanning the real estate ads in search of new quarters within walking distance. OK, not really, but it’s tempting.

Shreeji opened in mid-November in a shopping strip on busy Hurstbourne Parkway. Modern and bright, it has golden-brown walls bearing small pictures with Indian themes. Stylish, white, blue and red pendant lights dangle over black tables set with attractive white, pale-green and orange plastic-and-metal chairs. Order at a counter along one side, take a number and wait for your goodies to arrive on disposable service ware. Although everything is cooked to order, it won’t take long.

The menu offers a near-bewildering array of street food options, including a dozen appetizers, more than 20 chaat specialties, 14 traditional South Indian dishes, a half-dozen Indo-Chinese items (ultra-fiery Chinese dishes with an Indian twist), a half-dozen sandwiches (with Indian ingredients served between thick slices of white bread), a few rice dishes, a handful of Indian-style sweets and an array of nonalcoholic Indian-style beverages. (No alcohol is served.)

Prices? You’re going to love this: These Indian small plates range from $2.99 (for a pair of deep-fried, crunchy potato vadas or veggie samosas) to an absolute top price of $8.49 (for chole bhature, a Punjabi dish of spicy chickpeas and fried bread).

Did I mention that it’s all vegetarian? You won’t find a morsel of meat in the house. But I promise you this: You won’t care. It’s that good.

We’ve been twice and barely made a dent in the menu. With so many discoveries to be tried, I’m planning to go again soon. I recommend that you do the same.

On the first trip, we tried a couple of South Indian dishes that we learned to love when we lived in New York City’s Queens borough, where authentic Indian eateries are, well, everywhere.

Shreeji invites you to choose your spice level from one (very mild) to six. The server assured us that we did not want six. I gave in and ordered a range from two to four, but might go for five next time.

Masala dosa ($6.49), traditionally a breakfast or brunch dish but good all day, is a gigantic, crisp South Indian crèpe, made with a fermented rice and black lentil flour that imparts a haunting flavor. It’s folded around a mix of spicy potatoes and served with a small bowl of sambar (spicy vegetable soup) and a couple of fiery white coconut and green coriander chutneys.

Tomato and onion uttapam ($6.49) looks something like a pizza, but it sure doesn’t taste like pizza. Made with the same flour as dosa but poured thick, like a pancake, it builds tomatoes, onions, cilantro and fiery spice right into the batter. It’s served with sambar and chutneys, too.

Returning another day to take more home, we tried bhel puri and papdi chaat (both $4.99), which looked similar under a blanket of crisp rice noodles and crisp lentil crackers but contained different treats within: Bhel puri had puffed rice, potato and onions; papdi chaat featured chickpeas and tamarind sauce.

A sweet but soothing mango lassi ($3.49) made a healing antidote to the deliciously spicy fare.

Dining in on the first day, we stuffed ourselves for a grand total of $22.23. Our second visit totaled just $17.99. (The tablet-based sales system did not afford the opportunity to tip, and there was no tip jar in sight.)