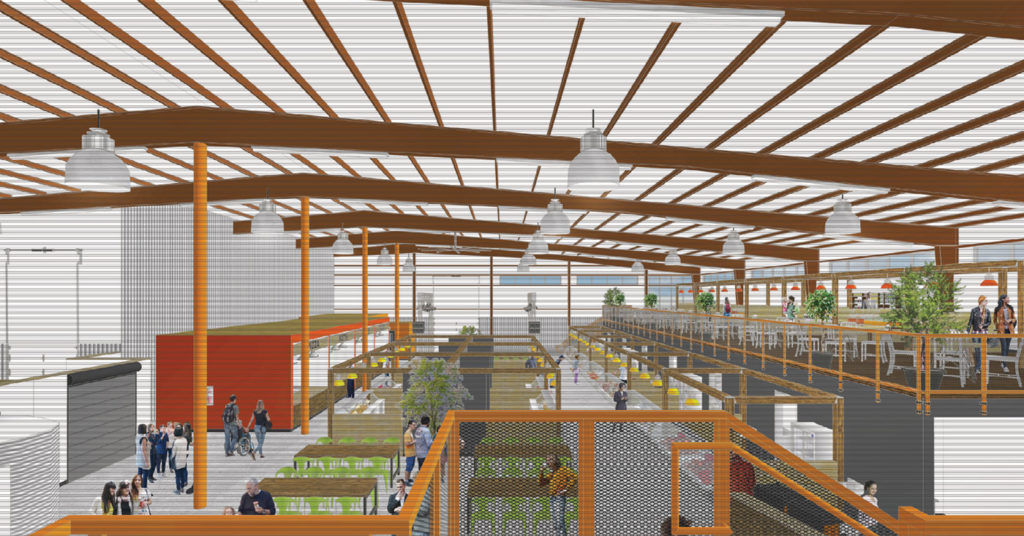 Autumn 2018 had passed. In fact, the banner was still up less than two weeks before 2019 — an entirely new year. But Logan Street Market is still coming.

The Logan Street Market, a public market like ones in Los Angeles, Columbus and elsewhere, is on track to open by June after overcoming bank-related funding snafus, its spokesperson said.

The market’s owner, Mike Safai, founder of Safai Coffee, hopes the $2-million project will become a top tourist destination for Louisville, said Sarah Height, director of the project. But Safai also chose the concept with the community in mind — it will have event space, a kitchen for public use and fresh produce, as well as specialty vendors.

“I think it can fill the void for some needs like fresh, affordable produce, but you know, we’re not going to be a full-service grocery store,” Height said. “That’s just, you know, the reality of it.”

Height hopes the market will be a central gathering space because Louisville lacks one. “Like, there’s no real plaza or square or anything like that. And markets really serve to be that for the city.”

Logan Street Market will straddle two neighborhoods, the burgeoning hipster haven of Germantown and the culturally diverse, but underserved Shelby Park area. Safai bought the warehouse because he wanted to move his coffee operations from LaGrange, Kentucky, to the urban core of Louisville. When deciding what to do with the extra space, he settled on the public market.

As of December, hardly any noticeable buildout had begun on the future home of Logan Street. Paper lanterns from a preview party still hung from the ceiling, but plans for the market, and its 18 vendors, including restaurants and some ventures of Safai’s own creation, were solidifying.

Height clacked across the market’s concrete floors and gestured to where each row of shops would be: First, a “fresh air hall” with produce, flowers, bubble tea and baked goods from Wiltshire Pantry. Then, a Safai coffee and gift shop (naturally), along with a row of specialty food vendors, including a butcher, cheese shop and a business called Georgia’s Sweet Potato Pie Co.

The middle row of vendors will contain even more special bites from businesses such as Bourbon Barrel Foods, including sauces, wine, olive oil and ice cream. The back of the first floor will be occupied by four counter-service restaurants, including Ziba’s Bistro (African-French fusion), Nelson and Nylahs (Venezuelan), Bramble (American South) and a fourth project from a current, unnamed restaurant owner, but one that will be a “totally different concept” from their existing operations.

Also on the first floor, will be Safai’s original brewery, Wild Hops, which will specialize in single-origin beers. Overlooking the “food and beverage paradise” on a yet-to-be-built mezzanine will be non-food retail.

Height envisions busloads of visitors coming to Logan Street Market to shop. Still, in keeping with the mission of a public market, it will be a “central community gathering space with locally owned food and beverage” and several spaces for Louisville residents to use.

The market’s kitchen will be open for free, public nutrition classes, as well as ticketed chef demonstrations. There will be a community stage, a small art gallery, a children’s play area and outdoor event space for festivals and a weekly farmer’s market.

Height expects locals to shop at the market, too. She foresees, not only families from Germantown who want to buy local specialties, but those who need to pick up a few staple groceries, too.

Another reason Safai chose to open a public market was to create a small oasis in the Shelby Park neighborhood’s food desert.

In October, Shelby Park’s only grocery store, Save-A-Lot, closed, leaving the Kroger in Germantown the closest for fresh food.

The produce sold at Logan Street Market will be affordably priced, ideally on par with Kroger, Height said. Even so, she knows that the market won’t fill all of Shelby Park’s needs.

That means Logan Street won’t sell frozen foods or affordable condiments, but it will have a weekly farmer’s market, at which SNAP Benefits will be accepted and WIC-recipients accommodated for. Safai has been working with New Roots on bringing a Fresh Stop Market to Logan Street’s outdoor area, too.

Logan Street will definitely serve one need: the bragging right of having a public market. They’re not popular in just the biggest cities. Cincinnati’s Findlay Market, around since the 1800s, underwent revitalization efforts in 1995.

Matt Jamie, the owner of Bourbon Barrel Foods, one of Logan Street’s future vendors, has long admired those in other cities.

“Those of us that have been here for a long time have kind of lived through the city’s efforts to get people to come back downtown, to visit,” he said. “It seems to finally be happening.”