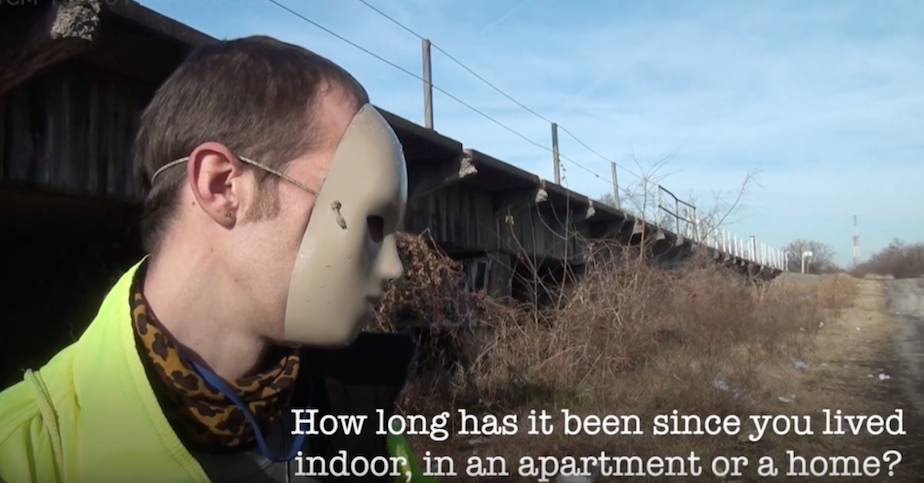 To find out why more people were not using its shelter, Wayside Christian Mission interviewed people living on the streets. The interviews were recorded.

[Ed. note: Since this story was published, the city announced it is opening three more low-barrier shelters. Read about it here.]

The next evening, around 90 people had taken refuge in the gymnasium of Wayside Christian Mission’s Jefferson Street shelter, said Nina Moseley, the nonprofit’s chief operating officer.

Because it is a low-barrier shelter, those 90 faced few obstacles to enter Wayside Rescue Station. Unlike at other shelters, including Wayside’s main space, people were welcomed regardless of whether they were with a partner or their dog — whether they were intoxicated or had been banned from Wayside previously. The only requirements: no weapons, drugs or alcohol on-hand, and no fighting.

“So far, we haven’t had any problems,” said Moseley. “It’s been very nice.”

But the shelter is not yet what Moseley would like it to be. It would cost Wayside $20,000 a month to run an ideal shelter, one that had separate, trained staff and places to sleep besides mats on the floor.

Low-barrier shelters are new for Wayside and for Louisville, but other cities, including Cincinnati, have had them for decades.

Demand for low-barrier shelters intensified in recent months as people began sleeping under the Interstate 65 overpass at Jefferson Street and temperatures dropped. Finally, on Dec. 13, Metro Council voted to spend $546,791 from the surplus to open a low-barrier shelter or shelters, but first the city had to create a plan by Jan. 2.

Wayside did it on its own, inspired by interviews with over 30 homeless people in mid-December about why they did not use the city’s existing shelters.

“A lot of their stories were just unbelievable,” Moseley said, “and most of them had been on the streets for, you know, two years or more.”

Also creating urgency for low-barrier shelters has been mounting criticism of the city for clearing encampments of homeless people over the summer and into the fall.

Mayor Greg Fischer’s administration has pointed to the city’s Homelessness Encampment Task Force created a year ago as proof of his administration’s concern and response, but that group has yet to propose any solutions or plans.

In an op-ed to the Courier Journal, Eric Friedlander, chief of the Louisville Metro Office for Resilience and Community Services, made the case for why the city has not moved quickly on a low-barrier shelter.

“The task force identified that as a need, but it’s a multi-million-dollar project, and there are multiple questions to resolve before we move forward: Where should it go? How big should it be? How do you keep families with children separate from individuals with behavioral health issues? How do we fund the cost to build and staff it?”

Moseley said operating a low-barrier shelter is labor intensive, and she believes most shelters don’t have the room for one. Wayside’s other shelters are full every night.

Chad Caine, president of Keep Louisville Warm, a homeless outreach group, said he wishes that Wayside would have opened up its gym as a low-barrier shelter earlier, but he’s happy that the organization is doing so now.

“They’re the ones stepping up, and they could possibly save some people’s lives,” he said.

They may have already done so. The day Wayside Rescue Station opened, a case manager discovered a homeless man unconscious across the street: His face purple, his lips bleeding, Moseley said.

The Wayside employee took the man to the rescue station where he warmed up and revived.

In recent months, two men who were homeless also have died outside including one in a tent allegedly lit on fire. The other died while sleeping in low temperatures. Preliminary results from the coroner indicate that he died of natural causes, not due to weather.

Wayside Rescue Station is open 24/7 and allows homeless people to come and go at any time and sleep whenever they want, which isn’t allowed at most shelters. They can take a shower, have a meal and borrow a game from the shelter’s library. There are kennels available for guests to house their animals at night (pets are allowed in common areas during the day). A case manager is also on-hand to counsel guests.

But Caine agreed with Moseley that the shelter needs more.

“Is it satisfactory?” he asked. “Only in a minimal way.”

In Cincinnati, the year-round low-barrier shelters have what Wayside needs.

Shelterhouse, which opened in the early 1970s, operates a year-round shelter for men and one for women. Each has low-barrier sections. The organization has since started a low-barrier winter shelter, too, which provides extra space.

Shelterhouse workers are coached in de-escelation tactics and how to use Narcan to resuscitate people who have overdosed, said Arlene Nolan, the organization’s executive director. Her shelters (besides the winter shelter) pair each entrant with case managers so that they can work toward housing.

The Cincinnati area has two more low-barrier winter shelters, according to Samuel Landis, founder of Maslow’s Army, an outreach organization in Cincinnati. He believes they save lives. “These individuals must be able to stay warm in the cooler months and stay cool in the summer months,” he said. “Without a low-barrier shelter, including too many rules and having them jump through too many hoops, it could present dangerous situations for those who have no other options but to go out onto the street and try to seek warmth somewhere.”

In the past five years, the number of people in Cincinnati sleeping on the streets instead of shelters has declined by 42 percent (from 1,692 in 2013 to 979 in 2017), according to Cincinnati’s Strategies to End Homelessness.

In Louisville, 774 residents were living on the streets, unsheltered, between October 2016 and September 2017, according to the Coalition for the Homeless.

Wayside plans to keep its low-barrier shelter open until the end of the winter and then plan for its future. The nonprofit could be eligible for some of the $546,791 that Louisville has set aside.

The citywide plan scheduled to be finished by Jan. 2 may include multiple low-barrier shelters. That would make sure there aren’t too many people in one place and that families and sex offenders can be split up.

The office of Resilience and Community Services has until Jan. 14 to start using its council-allotted money. Afterward, the resolution requires Fischer to present proposed solutions to the local homelessness crisis no later than April 25, which is when he submits the annual budget.

Councilman Bill Hollander said that the money should be seen as “a bridge” to more permanent solutions to homelessness.

For now, Wayside Rescue Station appears to answer some needs.

On Christmas, nine couples who would have otherwise spent the holiday outside together, or separately in a shelter, stayed at the rescue station, as well as did several people who had been previously banned from Wayside.

That convinced Moseley: “I think it’s the right thing to do at this time,” she said. •