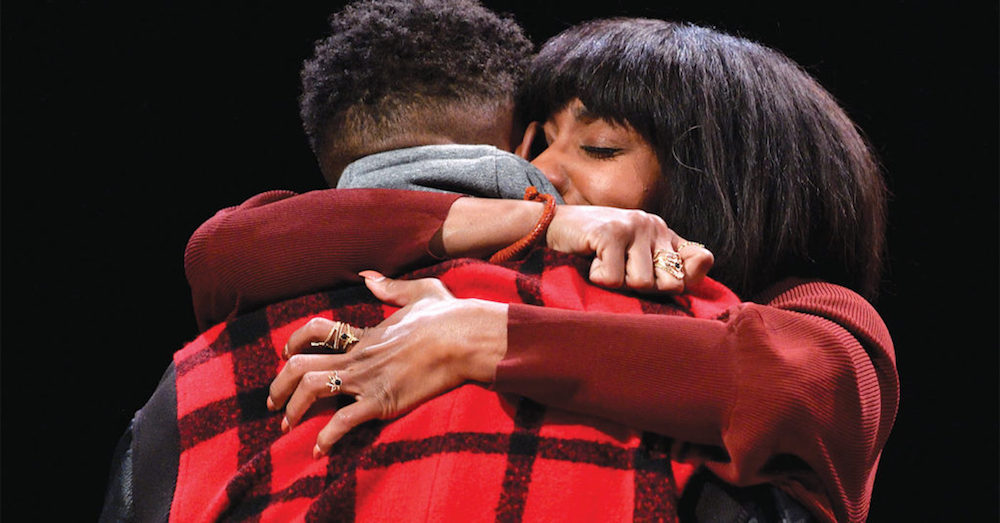 The title of Dominique Morisseau’s 2017 play, “Pipeline,” refers to the school-to-prison pipeline phenomenon that too often occurs with young black men in America. In an interview that she gave in July 2017, she explained that she was driven to write the story after an incident in which her “surrogate-nephew” was heavily criminalized, as well as the shooting of Michael Brown and the media coverage of him.

But part of the poignancy and emotional tautness of “Pipeline” is that the words “school-to-prison pipeline” are never used in the script. Instead, the theme screams through Nya’s (Patrese D. McClain) ever-present fear for her son Omari (Cecil Blutcher) in the wake of his own incident — in which he pushed a teacher at his private, upstate school. Nya, teaching at a public, inner-city school, panics and spirals as video of the incident circulates online and the school threatens to press charges. It’s in the conversations between Omari and his girlfriend Jasmine (Renika Williams) as he discusses running away, for fear of the shame he’ll bring on his mother. And it’s in Omari’s anger, echoed later in the play by Dun (Eden Marryshow) — a generally friendly and flirty security guard and Nya’s former fling, who snaps in frustration after an incident that occurs in their own school. As Nya explains later, that anger is “not his sin; it’s his inheritance.”

One of the most poignant ways of expressing the hopelessness of the situation and Nya’s deep fear for her son is in the refrain of Gwendolyn Brooks’ poem “We Real Cool.” Nya goes over the poem with her class. The words flash on a screen above the stage as she covers it and a chorus of young, black men reads it emphatically just slightly offstage. But they halt before the last line, as if a record that’s hit a snag. Nya stumbles, and then one of the boys approaches her. It’s Omari who delivers the final line: “We die soon.”

Omari doesn’t die over the course of the play, and the final scene is perhaps the lightest one of the show: one in which Omari reads to his mother a list of “instructions” that she requested to help him stay out of trouble. But his fate is left hanging as we never learn whether his school actually presses charges, and we know the video of the incident is still circling the internet. This play doesn’t leave the audience devastated, but it also doesn’t take them by the hand and tell them that it’s all going to be OK.

Morisseau knows better than that.

In addition to the visceral emotions of the show, the sound effects by Sound Designer Curtis Craig are a highlight of the show. His song choices are atmospheric, and in one brilliant moment, a song for a scene transition slowly fades and becomes distorted until we hear it through Nya’s radio. Craig’s design is also so smart that he knows when to back off the sound. Omari explains to his father, Xavier (Jaben Early), what led him to push his teacher, and the stage is so quiet that you can actually hear audience members crying across the room.

One further element that made this show stand out was the note from the playwright in the program, encouraging the audience to react audibly in moderation, whether through vocal responses or loud laughter (and as serious as the show might be, the clever dialogue also lent itself to several laughs). “This can be church for some of us,” she explains. Because theater shouldn’t always be quiet and well-behaved. It should also move the audience to respond. •

On the surface, “Dada Woof Papa Hot” might seem like the kind of story that’s been seen hundreds of times before. It showcases middle-class, New York City couples, each with young children, as they raise children and try to keep marriages and friendships afloat. There are affairs, long speeches about their own dissatisfaction and climactic relationship implosions. It’s a clever script, charmingly acted, and no dynamic between two characters is the same; but it’s not new by any means. It takes on a different tone when you consider the fact that the couples are two pairs of gay men, navigating both marriage and family life in a world where it’s finally legal and generally acceptable to openly do so.

“Dada Woof Papa Hot” by Pandora Productions reminds the audience that this is still a recent turn of events and one that comes with some awkwardness. Nowhere is this clearer than in the character of Alan (Shayne Brakefield). Alan and his husband Rob (Drew Sutherland) are a bit older than their friends Jason and Scott (Mitchell Martin and Jason Cooper), and Alan in particular talks about his experience coming out as gay in the ‘80s. It was a time that’s sometimes romanticized by the younger characters such as Jason, but Alan’s single, brief line “I got through the epidemic” serves as a haunting reminder of the massive loss to the LGBTQ community in the ‘80s due to AIDS. It’s Alan who has the hardest time adjusting to the new normal and to the idea of being a father, and you get the impression that’s largely due to his experiences in the ‘80s.

This is a show about parenthood but not one that focuses on the children. You may occasionally hear Alan and Rob’s daughter Nikola shouting off-screen, or see actress and mother Julia (Heather Green) reprimanding her sons. And you see it in the set design by Director Michael J. Drury, in which all of the seating and furniture is made of large, children’s blocks and toys. But you never see the kids, and that’s smartly done. This is a show about the parents, and while it does show the parents genuinely caring for their kids — particularly Rob and Alan with Nikola — it’s also frank about how frustrating… and even sometimes disappointing parenthood can be. •