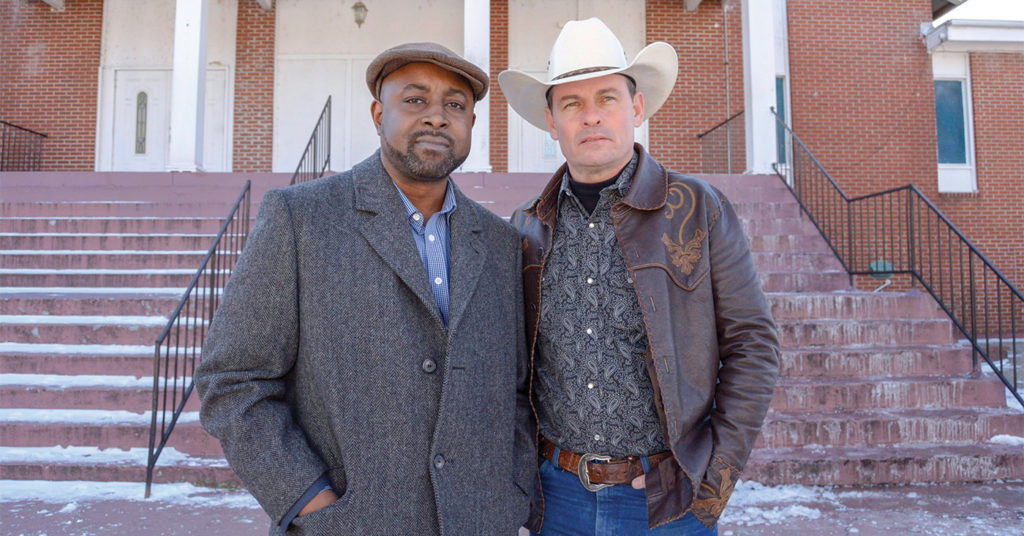 Jan. 21, 2019
Dereck and Martin, from the California neighborhood

Dereck: “Dr. King in his ‘Drum Major Instinct’ speech spoke on being a servant. The type of service that he did, he wasn’t well paid as a lot of the activists are today. He was looking for his reward in heaven. I really think that’s what inspired me the most, is to serve. The greatest amongst you should be your servant. That’s what he said in his ‘Drum Major Instinct’ speech, and I agree.

I would give advice to the black community, specifically. I’m not versed on every issue in the world. I do know that Dr. Martin Luther King fought for Negroes’ rights, and I think that we have split, to some extent, between family breakdowns and addictions within the community. There’s a whole lot of different things that separate us, and the unity we had under his one voice is what I hope we go back to. Right now, we’re celebrating Martin Luther King Day, and just last night, Kamala Harris announced that she’s running for president. There’s not a unified black community behind her. There are identity politics, which she represents more so than the community that wants her to be in office. I want that unity to be restored. I want the community to be restored. I want the families to be restored, so that we as a collective can be whole.

We can fight heroin if we stop selling it to ourselves. We can fight homelessness if we open our doors to one another. We can fight starvation if we treat each other as brothers and sisters. We have to stop discounting each other. We still have a long way to go before we find equality in America. We need to go back and reclaim lost values, like Dr. King spoke on. When he said that, he was saying that when they left Jesus, a day’s journey away, they had to go back to reclaim Jesus, so they can go forward. We’re in the same situation. Our community is a lot more secular than it used to be. The black church isn’t the pillar, like it used to be. In fact, it’s more so identity politics and focus groups that take our charge. So, going back to reclaim Jesus is a big thing, which means we need to reidentify in love.”

Martin: “There’s so much to think about when you listen to all of the people that hung out with Dr. King, like … Rev. Elliott and all of these guys in this community. They talk about how he inspired them, and you try to live in that shadow. We were the dream. We are the dream. To live under that inspiration and to hear these men talk about him, for me, is to be that kind of man. That’s what most inspired him. He could see me, in the future, being that man.

The strength and the power of the force of unity is something that, if ever needed, I hope we have it, collectively, regardless of who we are. My advice is for us to not see ourselves as separate and get fragmented in our own viewpoints, and find that collective unity. The strongest force is unity. There’s no other force stronger. Find that strength and voice in unity. We need to be whole to carry and shoulder each other’s burdens.”

“See, I got out of the Army in ’69, so I’ve been here since October 1969. It’s still the same old Portland. Everyone gets along pretty good. There’s still a few fights, every once in a while, but it’s still Portland. I love the people here. A lot of them are straightforward. If you gotta problem, they’ll tell you, and you get it worked out. That’s what it’s all about.

There’s a lot of houses getting tore down, and there’s a few new businesses coming. Of course, there used to be a lot of businesses here. This house here may have been a store or something. There was a lot of mom and pops stores and restaurants and stuff. A lot of them are gone, but there’s a lot more coming back, and that’s good. The neighborhood needs a little more courtesy. We need people to start saying, ‘Hello’ or ‘How ya doing?’ All in all, this is a pretty good neighborhood.

I had a heart attack and died, and the paramedic shocked me back to life. That was the real eye-opener. That happened in ’97. I had to make a lifestyle change. I quit smoking and drinking. I had to let go of a lot of things. That made a big difference.

I even talked to an angel when I was dead. I kept asking her about my wife and kids, and she told me not to worry about it and that they were taken care of. She told me that there was two things that God wanted me to do.

When I was brought back to life, I sat at home for two years and couldn’t figure out what God wanted me to do. He wanted me to do two things, not one. I kept thinking about what it was that God wanted. I sat there and watched TV, and there was an evangelist on and he said, “There’s two things that God wants you to do.” He told me to get saved and worship God. I was already saved, but it blew me away. It was something so simple, and I was trying to make it out to be something else. It was so simple.

West of Ninth began as a Louisville photography blog, westofninth.com, by Russell residents Walt and Shae Smith. With a love for their community, they see the value and potential of all nine neighborhoods in West Louisville. Armed with a Nikon DSLR, a recorder and the ability to never meet a stranger, their goal is to shed light on the attributes that make West of Ninth the greatest.