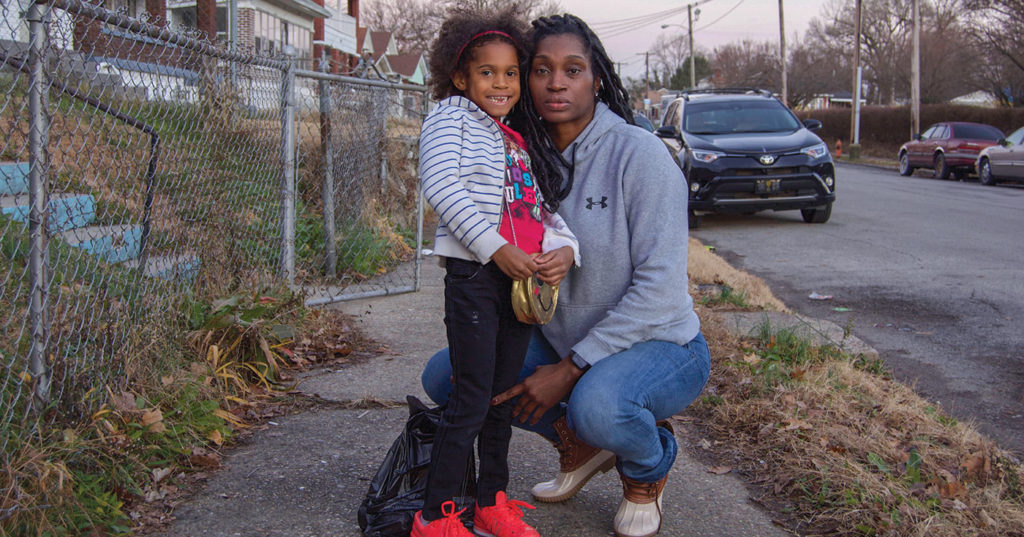 Ebony, with her daughter Adira

“She’s my youngest of four. She’s my baby. We have a really good connection, too. I don’t know what else to say, but she’s just the last one. She’s special, and she’s different.

When you start having kids, you don’t realize what your job really is, but it’s to prepare them to come out here and survive. It’s bad out here, and I’m hoping that I’m able to give her life skills to go out here and do well. That’s with all four of my kids. I have one that I’m getting ready to send off to college, so I’m scared. I have one son, and I’m scared for him. I try to do the right thing. I’m hoping that I do enough for them to have the survival skills.

Being a parent is hard because you’re doing the best you can. You send your kids to school, and the majority of their day is spent with kids who may not be getting what my kids get. That’s the bigger influence. I just hope that whatever I do sticks with them, and they are able to not be led astray by it. My oldest is in private school. People always ask me why I did that. I don’t want her in class with a classmate whose dad was just shot. We’re at Assumption, where some kids may be affected by a different type of crime, but you have to pick your poison. Although this is our community, I have to, sometimes, send them outside of the community to get a better education for survival. I’m really scared for my kids.

I have a son that catches the bus, right here at Shorty’s. I take him to the bus stop every morning. I let him walk home, but I take him every morning. Am I coddling him? No, I’m protecting him. I see him, and he’s 12. I also see other kids, who are 12, and doing different shit. He knows that, but it’s hard. I want him to love where he comes from but at the same time, he has to find balance. They have to get outside of the neighborhood to see other things happening, and that’s why I sent my daughter to Assumption. She hates it, but the survival skills she’s learning there are things that we learn when we get older and in the workplace. She gets to see how they move, and how they play. The education that she’s getting is top of the line and getting her ready for college. She hates it, but it’s OK. When she gets to college, it’ll be a cakewalk. I have to make decisions for them now that they’ll benefit from later. They just don’t understand it, right now.

I’m trying to find something. Plus, I rap. I want to do that and have a clothing company. I’m trying to get some money, so I can buy the whole hood. I want us to own more of these houses. You got people coming down here and wanting to take over. They don’t even want us out there.

I feel like we, as blacks, already gotta strike. People just want us to do something bad and, when you mess up once, that fucks up everything. That don’t mean we’re bad people. It’s just that when we do that one little thing, everyone else thinks we’re the devil. We don’t get second chances. They on our ass. The money’s low down here, and people feel like they gotta trap. People got charges and shit and can’t get a job. You gotta come out here and get it. Don’t nobody wanna be broke.

Why can’t everyone succeed? It’s people, that only have straight histories that come up. There’s a lot of good people, that I know, that have bad histories. They’re good people and with a past.

Man, stay in school. When you’re in school, they love you. Stay in school and stay out the streets. Ain’t shit goin’ on out here, for real. That’s what I be trying to tell kids. I done been through all this shit. Ain’t nothin’ going on.” •