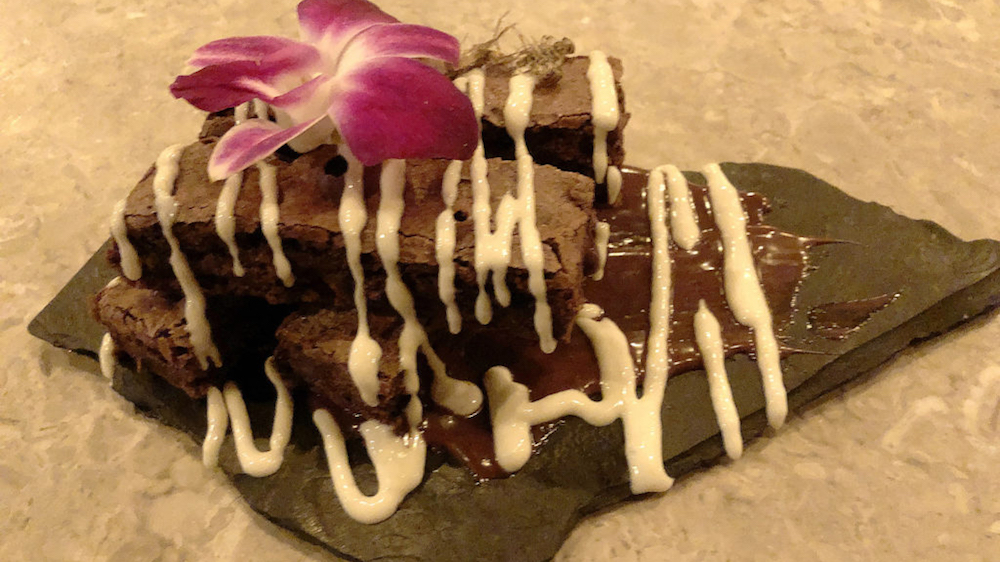 Let me tell you three important things about Ostra, the stylish restaurant that opened last summer in Clifton:

— It is very loud, so loud that a sudden shout can — and often does — spike its noise level into the potentially hazardous zone above 90 dB.

— It is very dark, so dark that it’s not always easy to make out what’s on your plate.

— It is very, very good, so good that I really don’t mind that it’s loud and dark. I’d go back in a heartbeat.

It also serves, among other things, a chocolate brownie made of crickets.

Insects are prized as delicacies in many countries in the global South. America hasn’t caught up with the rest of the world yet, but that may change in this century. Burress is kindly offering us a head start.

Don’t worry, though, the brownie is the only item on the extensive menu that contains insect life. There’s plenty of seafood, including several oyster dishes plus uncooked poke, seviche and more. Other meats are chosen for their sustainability and availability from local farms, including wild boar, duck, chicken and rabbit. If you want a steak or a chop, you’ll have to look elsewhere; but it’s your loss if you do.

Oysters and raw fish dishes range from $6 (for oyster shooters) to $15 (for poke or hot oysters on the half shell). Three creative salads are $12 or $13, and bocata — mini-sandwiches on pretzel buns — are $8 or $9. A dozen main dishes are priced from $10 (for bang bang cauliflower with jalapeño risotto) to $23 (for lobster Fra Diavolo).

While we peered at our menus in the dusk, we gradually became aware of the cool, stylish dining room. The walls are dark gray, with a few scattered artworks. The floors are pale-gray concrete, save for large black-and-white tile squares in the Z-shaped bar. Table tops are irregular slabs of marble and granite, set with small but comfortable chairs. About 15 dimmed lights hang overhead, each enclosed in a wicker basket shade.

The drinks list features craft beers, creative cocktails and about 30 well-chosen wines. I started with a Wild Thornberrys cocktail ($9), a yummy first cousin to a negroni that added sweet-tart blackberry flavor and a basil leaf to the usual gin-Campari mix.

Under nonalcoholic offerings — “ducktails” — we found the intriguing Webby Wanderquack ($5), which brought together a wacky combination that really worked: hot chaga, Japanese mushroom infusion, scented with peppermint and vanilla and served hot in a large cup. It was delicious: minty and not too sweet, a haunting flavor that lingered.

Two West Coast oysters on the half shell ($4 each) were ample in size, served on a bed of rock salt. They went down smoothly and tasted of fresh ocean water, cold and clean.

Poke ($15), a Hawaiian, raw fish dish, was just as delicious. Perfectly fresh sockeye salmon was diced and tossed with sesame, soy and a dash of red chili, mounded on banana leaves in a boat-like wooden bowl, topped with a dab of Japanese seafood salad. It was citrusy and cold, and made us want to order more.

By this point, the chef had built such a trust level that we were ready for cricket brownies ($9) after all. They’re made with cricket flour, ripe banana and coconut, and they’re fine brownies, without any obvious presence of crickets at all. A generous portion of four, long, stacked, oblong brownies was drizzled with chocolate and crême anglaise and topped with a flower and, wait for it, a desiccated cricket on top. Our friend Mona earned applause when she ate the bug.

Noise level: Make no mistake, with its hard edges and jovial crowd, Ostra is loud, particularly when every seat is occupied. (Average sound level 85dB, with occasional bursts to an ear-shattering 94dB.)
Accessibility: The older building has been thoughtfully renovated to afford access to wheelchair users at the entrance and in the restrooms.