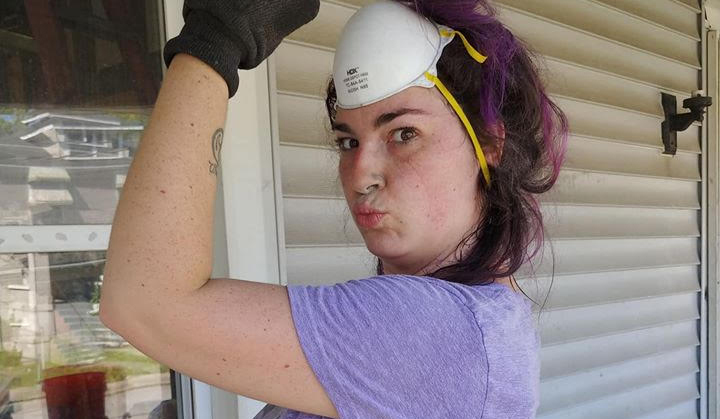 [Ed. note: This is part of a package of stories on LEO’s most controversial, best-read story, “White People … “. To read more, click here. ]

For those looking for a way to support people of color, maybe it’s time for something radical?

Reparations Roundtable is a year-old Louisville group that wants to make a difference for people of color, but in a different way than in the past.

Members are invited to either contribute a certain amount each month through Patreon, or they can give money as various opportunities are posted to the group’s Facebook page. A recent request asked for money for a black mother needing food and diapers.

“One of the real, tangible things that white people do to actually leverage their privilege is to leverage their resources, so their money and their land,” said Rosey Green, the cofounder of the group, which is based on a model created by Black Lives Matter leaders Chanelle Helm and April Goggans.

In addition to monetary reparations, Green asks members to volunteer their skills for the cause. If they work in finance, they can offer free advice to people of color. If they’re a writer, they can edit resumes.

This is not how some people have approached helping people of color.

When it comes to “doing something,” does that mean baking cookies? The Women’s March? No, according to Helm.

“Ain’t nothing I can do with a cookie but eat it,” said Helm, who is cofounder and core organizer of Black Lives Matter Louisville. “That’s not making sure that that baby is going to get through school.”

To hold the group accountable and to make sure that it’s giving to causes that will actually make a difference, Reparations Roundtable reports to Black Lives Matter Louisville and Washington. D.C., where Goggans works.

For those who are curious about reparations, but don’t know where to start, Green and BLM member Reece Chenault have created a set of recorded lessons about everything from the history of black oppression to how to budget for reparations.

Meetings for Reparations Roundtable are in the works for this year, too. The first of 2019 is scheduled for Jan 24.

So far, the group is off to a slow start, according to Green. Reparations are a hard sell in Louisville where Green said there are a lot of organizations doing great work, but not much on-the-ground mobilization.

“Louisville’s definitely mostly a place of people who like to sit around and talk about it or they like to play respectability politics,” Green said. “In terms of true, radical organizing, it’s a very sleepy town.”

Beyond that, just the notion of reparations are not fully understood or supported in the U.S. Nearly seven out of 10 Americans were opposed to the U.S. government “paying reparations to African Americans who are descendants of slaves for the harm and racial discrimination,” a 2016 Exclusive Point Taken-Marist Poll found.

In the U.S. House of Representatives, H.R. 40 would create a commission to study the possibility of legislated reparations. It has been introduced by U.S. Rep. John Conyers, D-Michigan, every year since 1989, not passing.

Even so, in the first year since Reparations Roundtable was created, Green said, she has seen good work being done. The group helped one woman, a mother, go from being homeless and without a job to having an apartment and certifications (and work) in the medical field.

This shows that Goggans’ and Helm’s system worked, Green said.