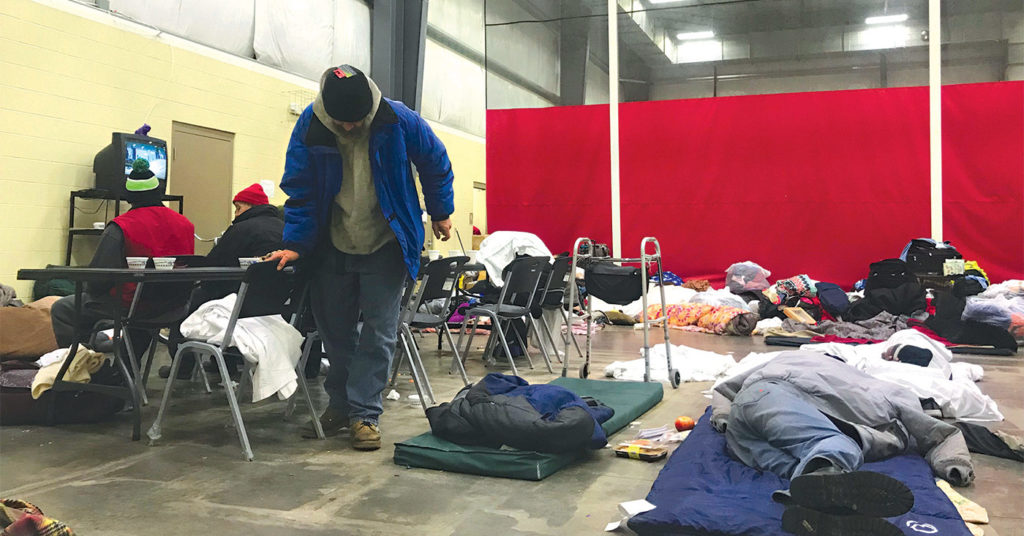 Christina Grimsley and Demetrius St. Clair said they were happy to be off the streets and allowed to stay together at Wayside Christian Mission’s new low-barrier shelter last week. They just wished the conditions could be better.

The couple complained about frequent fighting among residents, unsanitary conditions and a lack of sleeping options besides mats.

That is expected to change — or at least be improved — now that the city has agreed to pay Wayside and three other organizations to open low-barrier shelters with more than 140 beds and provide three meals a day to more than 130. The announcement was made last week.

Wayside will receive $100,000 to run its shelter at 432 E. Jefferson St. for six months, including three hot meals a day, laundry services on site, substance abuse counseling and tutoring for children and other services, according to the city. It is designed to accommodate families and pets.

Just three weeks ago, Louisville had no low-barrier shelters — shelters that allow people to enter regardless of whether they’re with a partner, have a pet or are intoxicated. Wayside Christian Mission was the first to open one, the day before Christmas. It may have saved a life that day: A staff member rescued a man who was unconscious and purple, just across the street, said Chief Operating Officer Nina Moseley.

The city finally got involved on Jan. 2. Mayor Greg Fischer said the city would use over $540,000 in surplus funds dedicated by Metro Council to open three more shelters and to devote more resources to the homelessness crisis.

This effort is seen as a stopgap. There is enough city money to fund these initiatives only through June. But as part of its funding resolution, the Metro Council requires Fischer to provide more permanent solutions by April when he presents his budget.

For now, the plan includes money for: beds, cots and mats; storage of belongings of homeless people; outreach workers to connect homeless people to shelter, housing and support services; and housing, food and medical services for pets on site.

Some services not provided include resources for the medicinally-abandoned homeless population and transportation to and from shelters, storage and services.

Chad Caine, president of Keep Louisville Warm, a local outreach organization, told LEO immediately after the city’s announcement that he appreciated Wayside’s initiative but is glad that homeless people will have more options than just that shelter in the downtown area. Since Christmas Eve, he’s interviewed dozens of homeless people, and only one knew about Wayside’s shelter, he said. “For a disabled person, maybe not to have walk to Wayside or that kind of thing, it’s going to be helpful.”

Natalie Harris, executive director of Louisville’s Coalition for the Homeless, said she especially likes that it will help people other than those who have been camping on under the Jefferson Street overpass. “I think those people that we don’t see as well are equally important, and a lot of them are families who may not be so visible, but also need us to lower barriers to get them into shelter as well.”

The race to provide low-barrier shelter options started Dec. 13 when the council unanimously passed its resolution. Louisville’s Office of Resilience and Community Services was asked to create a plan by Jan. 2, and the city’s shelters were allowed to submit proposals for funding. Although it took until the first cold, winter days for the city to address the growing number of people sleeping on Jefferson Street, Fischer said that the city’s newest efforts are on top of the Homeless Encampment Task Force, which has been working since last year.

“One of the things we’ve learned from our work so far is that to really meet our homeless citizens’ needs, we have to understand each of them as individuals, where they’ve come from, what they’ve been through and what they’re facing. It’s not all the same for every person. This plan will help elevate our work, but there are still many challenges ahead,” Fischer said, adding, “We’re going to keep working this until every Louisvillian has a place to call home.”

Councilman Bill Hollander, who first proposed using the surplus, said the plan is a beginning. “Homelessness has many causes and no one solution. The work we are starting now recognizes those facts, will help get some Louisvillians experiencing homelessness off of our streets, and will serve as a bridge to a more permanent plan to address their needs.”

Councilwoman Barbara Sexton Smith said, “Funding for low-barrier shelters and services for those experiencing homelessness will be a budget priority for 2020 as we on Metro Council work through this coming budget cycle.”

Caine was overwhelmed by the steps that the city has been able to take so far. “I just can’t take it in right now,” he said.