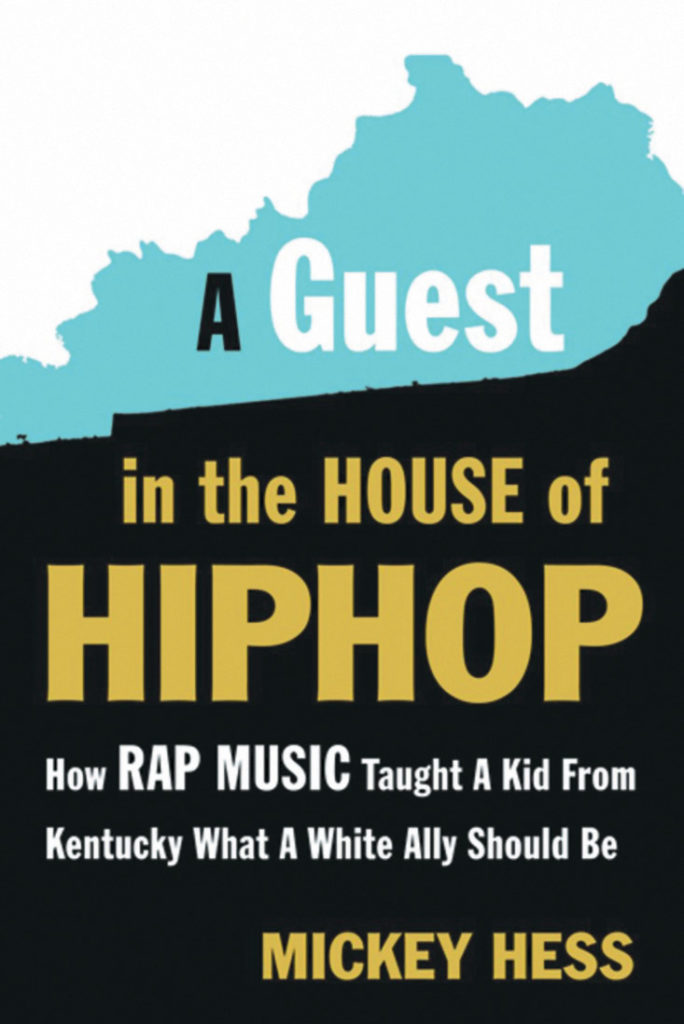 This book’s subtitle cuts straight to its heart: “How Rap Music Taught a Kid from Kentucky What a White Ally Should Be.” The author grew up dirt-poor in Science Hill under emotional conditions that were often nightmarish — but unfortunately not too rare. He became a sharp observer and hooked up with black culture at an early age, in the shade of Reagan’s presidency and the early prominence of MTV.

There are plenty of swaths of American society that will jump to declare Hess’ personal story is one of success. He’s become an academic in the Philadelphia suburbs, with much of his teaching and publications on a subject that he continues to love: hip-hop. But he knows that his white skin and sweater-wearing day-to-day keep him an outsider looking in — no matter how earnest his efforts at bringing in musicians and activists as guest lecturers or co-authors. He sums up the personal conundrum thus: “I look back at the mentality of my Kentucky upbringing as something I’ve studied enough history to overcome; I make a living teaching this history to college students, even as this history very likely gave me my job — a job that a more just society would have given a black person.”

So is this book an apologia, or simply a 200-plus-page apology for the author’s own professed racism? No — and don’t let wild, shared sidelights about Ol’ Dirty Bastard convince you that you’ve merely been invited to attend an entertaining history lesson. And don’t let eavesdropping on the author’s queasiness at having a conference debate with KRS-ONE mean that you’ve learned a lesson to be taken like a vitamin pill, then swallowed and relegated to a dusty corner of life’s instructive anecdotes. Hip-hop is an art form and a bellwether of American culture. It’s also a cash cow that has gained popular traction through its own contradictions. Just one facet of this is identified by Hess as an essentialism, in which he sees rappers (also rap critics) who “don’t want hip-hop to lose its basis in black culture like other forms of music did.”

There are plenty of places where that very loss can be found, of course. Vanilla Ice is easily skewered and Iggy Azalea pondered with a raised eyebrow. Macklemore directly asks if he’s doing anything more than profiting by striking a “white savior” pose (and that white rapper’s attitude get the response from Lord Jamar that gives this book its title). Looking back, Elvis Presley’s cultural appropriation is one big bang (but hardly the only one) that reverberates through the decades as mostly-white record executives shape hip-hop’s music and message, but activists fight the corruption that’s become such a well-established pipeline leading to a trough of corporate profits.

Hess, who’s coming into town this week for a reading/signing, knows that it’s a temptation for his lengthy history with his subject to allow him to declare what makes a success or failure at being “woke.” One of the best things in this volume is how the introduction lays out many traps that could be self-sprung by any reader expecting to pick up a how-to manual. When that introduction brings in Bill Clinton’s exasperation with Black Lives Matter as an example of eye-opening candor, you know that even the most contemporary answers to questions of race will get only the mileage that they’ve truly earned. And you know that there’ll be value in following the well-laid-out journey on these pages, leading to closing chapter “Education Is the Apology.”