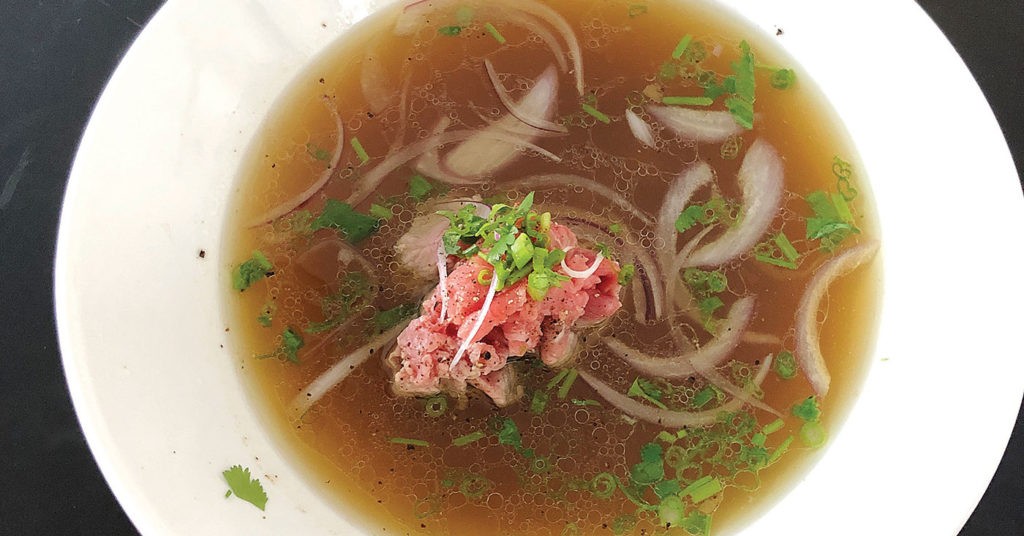 I was reading Anthony Bourdain’s book “Medium Raw” the other day when I got to his loving, sensual passage on pho.

And then he got on to the beef: “the perfect balance of lean and fat … sliced ever so thinly onto the surface of their broth, where it wilts and relaxes and nearly dissolves into sublime tenderness, cooking lightly in the hot broth.”

That did it! Couldn’t wait any longer! Off we went to Eatz,where I found to my delight that the pho is outstanding, and the rest of the fare is right up there with it.

Eatz is a tiny place, squeezing a dozen two-top tables into what once was the living room of a shotgun house. It opened early in November and, by all accounts, has been running close to capacity ever since.

The decor is simple and attractive, silver-and-white mottled wallpaper with a calming scene of the Buddha seated near a rippling brook and shade trees adorning one long wall; a white fireplace mantel is topped with knick-knacks and surmounted by a flat-screen television. Undraped black tables are furnished with mixed dinette chairs and set with forks and black plastic chopsticks rolled in soft saffron-color cloth napkins.

Owner-chef Nam Huynh’s two-page menu offers a concise but still enlightening peek into the Vietnamese culinary world. A half-dozen appetizers, a few spelled with a quirky Z (“wingz, rollz”), range from $4 (for a pair of egg rollz) to $6 (for fish-sauce fried chicken wingz or grilled meat balls, not ballz). Three variations on Vietnam’s iconic banh mi sandwich are $6.

Six entrées range from $6 (for plain fried rice) to $15 (for com dac biet, a bento box with grilled five-spice pork and shrimp). Pho is $10 with your choice of sliced beef, meatball, beef tendon, flank or tripe; or $14 for the whole megillah. Soft drinks, tea, coffee and fruit juices are $2 to $3.50; and beers are $3.50 for domestics, $4 for a short list of Asian and other imports.

Spring rolls, er, rollz ($4.50 for a pair) offer your choice of pork and shrimp or crisp-fried tofu artfully rolled into translucent rice paper with spinach leaves, cilantro and scallions, thin rice noodles and julienne carrots, with a sweet-hot, hoisin peanut sauce for dipping.

Fish sauce also made an unexpected but savory contribution to a fried chicken wing appetizer ($6). A batch of five firm, spicy, unbreaded wings were deep fried to a deep glossy mahogany color.

Grilled meatballs ($6) came four each on a pair of skewers. They were firm, not crumbly, thanks to the meat being minced into a paste before forming into small, tight balls. These were halved and flour-dredged before frying to create a crisp coating, and served with a hot-sweet sriracha-hoisin sauce.

Hu tieu ($12) is a South Vietnamese cousin to pho. Eatz’s rendition is based on pork and chicken-bone broth with chewy, rather wide rice noodles, with shrimp, squid, ground pork and pork loin all included in a diverse, fascinating mix that made it hard to pick out any single flavor.

Beef pho ($10), as expected, was a highlight. An exotic aroma of intense 30-hour-simmered beef broth and anise-scented five-spice wafted up from the large, deep bowl. Just as Bourdain said, thin-sliced raw beef was bunched up and placed atop the barely submerged noodles and thin-sliced onion so that it stuck up like an island of pink in a lake of broth. Chopped cilantro and green onion floated on top, and the traditional fresh green herb garnishes were served alongside. This was an exquisite pho. No other word will do.

For more LEO coverage about pho in Louisville, check out the two-part series PhoTastic Voyage.

Noise level: Although the room was small and crowded, we had no difficulty with conversation. (Average sound level 75dB, with peaks to 87dB.)
Accessibility: Not accessible to wheelchair users. Two steps up to the main entrance block access, and the unisex restroom lacks accessibility modifications.