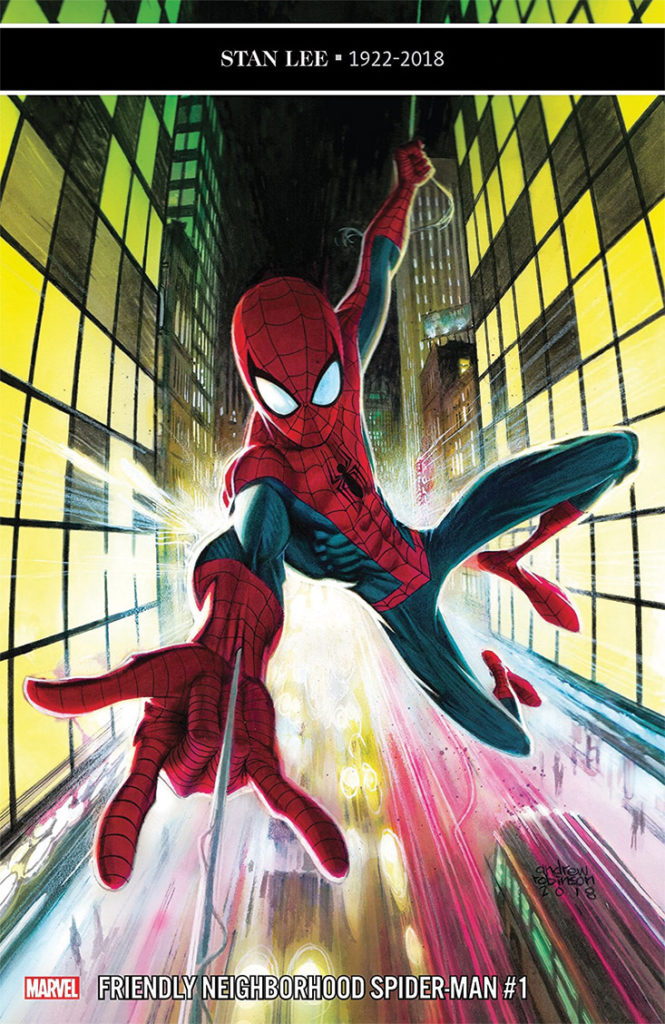 There are so many Spider-Man books coming out at the moment that I wondered how this one could be different. Well, it actually is! This book takes place in Peter Parker’s neighborhood as he is coming and going on his daily (and nightly) forays into superhero business.

As the book opens, Peter Parker is helping an older, slightly cranky tenant of the building take her groceries up many flights of stairs to her apartment. When he asks why the stairs, she tells him elevators are dangerous. She then asks him if he knows Spider-Man since he shoots so many pictures of him. When he admits he sort of knows him, she asks him to check on another tenant, as she’s scared. When asked for more information about her, she just hands him apples and says for him to take them to her, as she’s too busy to do it herself. Of course, this is the beginning of a very Spidey type of story line. It looks like there will be recurring characters like the two homeless people Peter helps out as well.

There are two stories in this first issue, the second being a more personal story involving Mary Jane and Aunt May. Both stories are open-ended so we’ll have to pick up issue No. 2 in two weeks to see where these close to home stories go.

The stories are written by Tom Taylor, with the first story drawn by Juann Cabal and Marcelo Ferreira drawing the second. 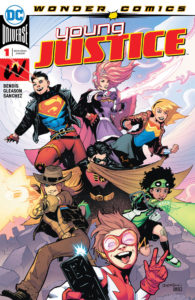 When Brian Michael Bendis announced he and artist Patrick Gleason were reviving “Young Justice,” a team-up book full of teen heroes that DC Comics had seemingly forgotten, it quickly became one of my most anticipated books. And let me tell you, there are fewer things better than spending months hyping yourself up for a book and having it exceed your expectations.

“Young Justice” No. 1 wastes no time trying to explain where certain characters fit into the larger continuity as the 12 Kingdoms of Gemworld attack Metropolis. With Superman a bit too preoccupied to take care of the threat, our team of once-sidekicks answers the call — we see our old friends Robin, Impulse and Wonder Girl joined by newcomers Teen Lantern and Jinny Hex. Light on larger story and more focused on character, the comic lets each member of the team get their chance to shine and be shown off so new and old readers can fall in love with them.

You can feel the creative team’s enthusiasm in every panel. Their love for this generation of heroes is on full display throughout the entire issue. It’s full of energy and heart and everything I wanted out of the book: enjoying some comic book silliness and seeing some of my favorite characters come back. Finding flaws with the book would come down to silly nitpicking.