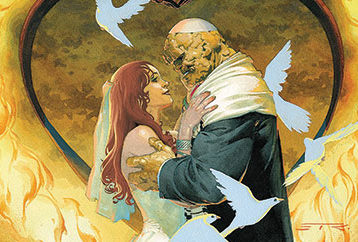 Well, this has been the year of comic book weddings, and, thankfully, this last one actually has a wedding in it!

Back in 1962, in “Fantastic Four #8,” Ben Grimm met Alicia Masters, and it’s taken them only 56 years or so to bring their relationship to the next level — marriage!

The book opens with the FF moving into their new headquarters in Grimm’s apartment on the eve of the wedding.  Sounds cozy, but Reed Richards uses science to make it twice as big on the inside as was the old headquarters. If you’re not already a reader of “Fantastic Four,” never fear, Sue takes a walk down memory lane that will put you in the know.

We get to experience an awesome bachelor party, full of Marvel Hero cameos, and a girls’ night, as well. Ben is doing everything in his power to keep his wedding low key, and keeping superheroes off the guest list is part of the plan. “No shenanigans!!” is the quote of the issue.

Naturally, there will be shenanigans! But there is also a wedding — this book is totally worth your time to read. I don’t read a lot of straight superhero books, but this one is special. And it has a sweet Stan Lee tribute running through all the Marvel books this month. Excelsior 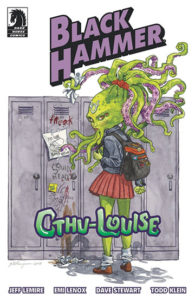 Fans of the Black Hammer universe have been gifted yet another addition to Jeff Lemire’s ever-expanding catalog of tie-ins. This one introduces us to Cthu-Louise, the daughter of the retired supervillain Cthu-Lou. She’s a meek, young girl trying to deal with not only the stress of bullies in the public school system, but also having the face of a monster.

In her dreams, a Lovecraftian sewer monster (who also happens to be her grandfather) calls to her, summoning her to the depths below Spiral City. As scary as it sounds, it couldn’t be any worse than the abuse she endures from the people in her life. How close is our little protagonist to the edge? How far will she go to get away from the terrors of teenagerdom? Will she accept the nuclear option?

“Black Hammer: Cthu-Louise” is not only a fantastic addition for long-time fans, but it is also a fun read for those that are unfamiliar with the series. There are just enough hints to the rest of the world and characters that very little context is needed to understand the struggles of little Cthu-Louise. If you’re a fan of coming-of-age stories and scaly, tentacle monsters, this one-shot is right up your alley.