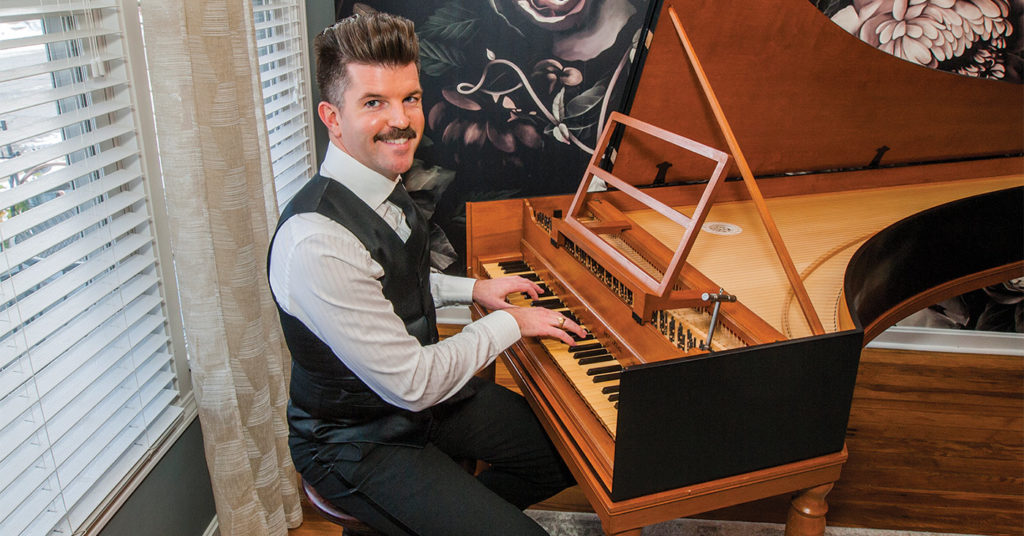 This article is part of the 2019 Winter A&E Guide. To read the rest of the section, click here.

In a city that celebrates bourbon (the drink), Bourbon Baroque (the chamber group) has an attention-grabbing name. Just don’t be confused by the Baroque part. As John Austin Clark, cofounder and co-artistic director of Bourbon Baroque (bourbonbaroque.com), explains it, “We perform the music of the 17th through 19th centuries for the promotion of public interest in the arts, culture and lifestyle of the Baroque.” That’s as heady as the drink it’s named after.

LEO: What type of musician are you?
John Austin Clark: I am a classically-trained pianist with an emphasis on historical keyboards including the harpsichord, organ and fortepiano.

When did you start making music?
Music has always been something that has provided great joy in my life since I was a young churchgoing choir boy around the age of 6. I began piano lessons at the age of 7. In high school, I got the theater bug and performed in several musicals.

What is your musical background and education?

I began studying the piano the summer after kindergarten. My studies continued in high school. It was at that time I began voice lessons.

After several failed attempts to enter Oberlin Conservatory as a voice major, I began studying the harpsichord and quickly found the instrument that would serve as my focus throughout my collegiate years. While at Oberlin, I majored in music education with a choral emphasis. This combination, while unusual, served as my inevitable, yet unforeseen, training for Bourbon Baroque. After Oberlin, I received my master’s in Harpsichord Performance at McGill University in Montreal, Quebec, Canada.

Who are some of the musicians you admire?

Keeping in line with my love for all things timeless, one musician I admire most is Hattie Bishop Speed. Known for establishing the Speed Art Museum, she was also a celebrated concert pianist with training in Boston and Europe. Hattie was an active recitalist in the Louisville area, serving as one of the most tenacious impresarios of her time. She held annual performances of J.S. Bach’s multiple keyboard concerti; chamber music was her favorite genre of music.

You are the co-artistic director of Bourbon Baroque. What is that?

Bourbon Baroque is a not-for-profit performing arts period chamber group that I cofounded with the late violinist Nicolas Fortin in the summer of 2007. Violinist Alice Culin-Ellison joined the leadership of Bourbon Baroque in 2017. The ensemble varies in size based on a given program, performing chamber music to full operatic spectacles throughout the year in a variety of venues. Of course, our strategy is always through a Baroque lens keeping the practice of using Baroque specialists, authentic instruments and interpretations that honor and serve the music.

What are some of the challenges of being a classical musician in Louisville?

In my 20s, I interpreted the lifestyle of a self-employed artist as challenging. Today, I look at it from a perspective of gratitude. If I am available and I feel the price is comparable to the value that I will give to the work, then there is no reason to say no. I find serving both as an accompanist for voice lessons or on the flip side as a director of music leading a choir from the harpsichord equally rewarding.

Why do you do it?

I do all of this work because it is how I connect with humanity. When I feel engaged with other folks, then my purpose is realized and there is a healthy ebb and flow to the energy in the room. Music is the vessel in which I am able to communicate and educate. My modus operandi.

Each day is different. I am a morning person and enjoy the potential energy that the early hours provide. Throughout the day, I can be found in a variety of places serving in different capacities. I accompany voice lessons at the University of Louisville, accompany various school choirs around town, direct musicals with local organizations, research in the library, practice for upcoming gigs, teach piano lessons, coach young singers for auditions, record pop songs on the harpsichord for a theater company, arrange music for a musical and so on.

What are you working on now? When does the Bourbon Baroque perform next?

Ballotin Chocolate Whiskey recently selected Bourbon Baroque as the beneficiary for its upcoming Chocolate Takeover event on Saturday, Feb. 9 from 2 to 5 p.m. at Total Wine and More, 5067 Shelbyville Road and 5320 Summit Plaza Road. Money raised will go toward the Nicolas Fortin Scholarship, a fund established in 2016 to keep the spirit of Fortin alive and well for years to come.

What is something most people do not know about you?

I come from a line of John Clarks. If my middle name had been Hallett, I would have been the fifth. My mother didn’t want me to be referred to as a ‘fifth,’ so I was named John Austin Clark. •