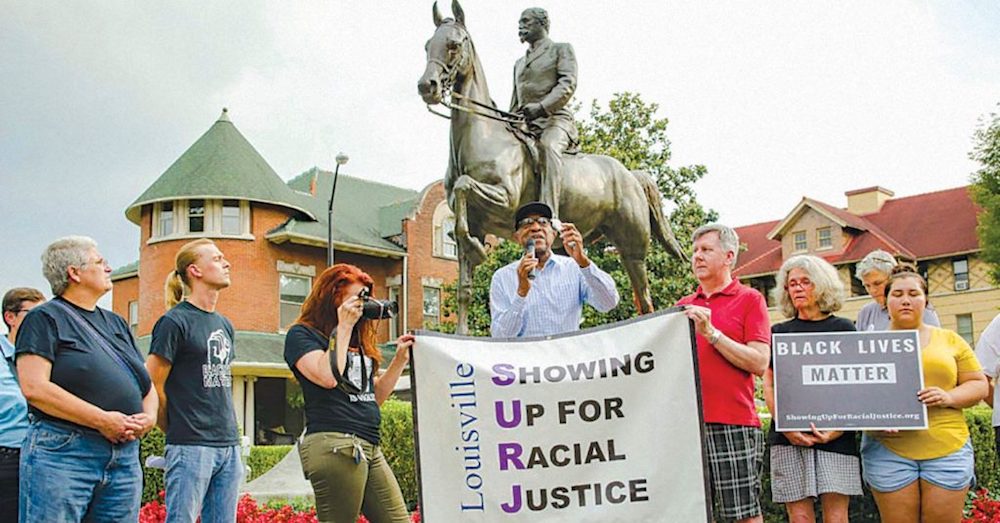 Bob Cunningham speaking in front of the Castleman Statue last June during a protest. (Photo by Nik Vechery)

Mayor Greg Fischer has not given up trying to remove the John B. Castleman statue from Cherokee Triangle.

Fischer announced Friday that the city will appeal a tie vote from a neighborhood historic preservation committee that blocks removal of the statue, which depicts the one-time Confederate soldier.

A press release from the Mayor’s Office said Fischer was “disappointed” in the 3-3 vote, rejecting his call to move the monument.

Now, the statue’s fate is on the Historic Landmark and Preservation District Commission.

In August, Fischer called for the removal of the statue because “Louisville must not maintain statues that serve as validating symbols for racist or bigoted ideology.”

Castleman served in the Confederate and U.S. armies and helped to establish Louisville’s park system. Calls to remove it came after the deadly rioting in Charlottesville, Virginia.

At Wednesday’s meeting, Cynthia Elmore, a historic preservation officer for the city, argued that, because the Castleman statue was not original to the roundabout, it wouldn’t harm the character of the streetscape to remove it, in accordance with Cherokee Triangle’s design guidelines. It would also not impact the roundabout’s function for traffic, she said.

The historic district’s guidelines call for the retention of historic gateways, circulation patterns and artwork when they’re character defining features of the neighborhood.

Committee Chair Michael Gross voted against removing the statue, citing the same guidelines  as he questioned the integrity of the city’s argument.

The Castleman statue is not explicitly mentioned as a contributing element to the district in the Cherokee Triangle Designation Report.

If the statue is removed, the city had offered to cover the roundabout with plants and to designate the site as an opportunity for future public art installations.

Most of the audience comments regarding the statue focused on its value as a piece of art and history. Thirteen people at Wednesday’s meeting, which included a few members of the antigovernment group the Three Percenters, spoke against or with complicated feelings about removing the statue.

“I speak for the majority of the silent in our community in the Cherokee Triangle that we like that statue,” said Lynn Horrar. “It’s a piece of artwork. That’s how we view it. It represents our Triangle.”

Other opponents said they feared that removing the statue would allow the censoring of history.

One person, an Indiana resident spoke in favor its removal. Nancy Gall-Clayton, asked the committee to consider how people of color might feel about the statue.

“What kind of community is this if we all want a statue to remain that no person of color wants to look at in its current location?” she asked.

No black people were present at the meeting, except for committee member Tamika Jackson, who voted for removal, reassuring residents that “history cannot be erased.”