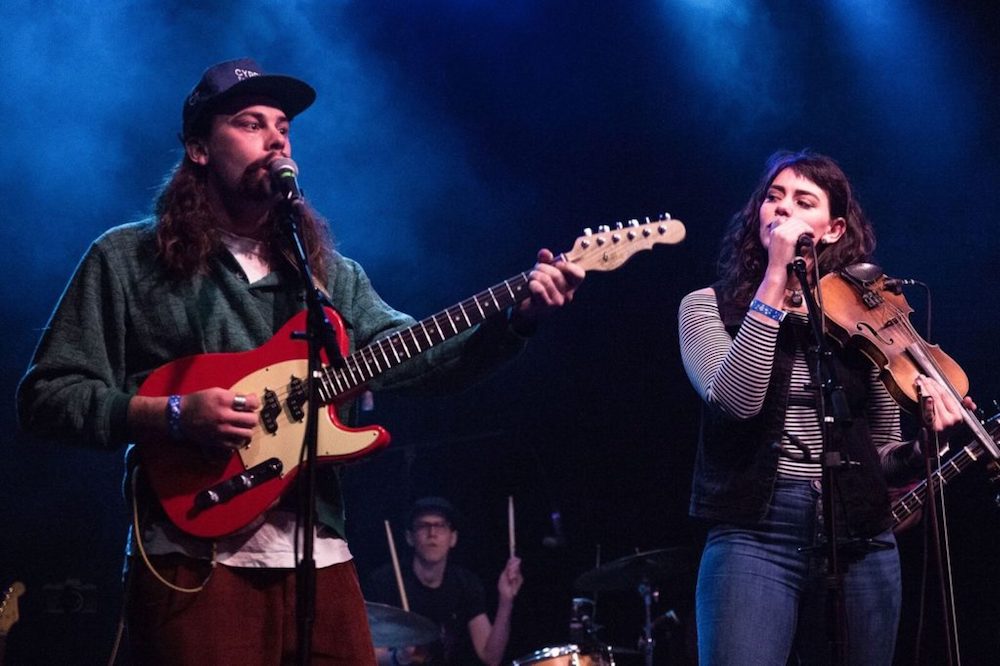 “Well, here we are” was one of the apropos remarks overheard at Headliners Music Hall early Saturday morning as 25 Louisville musicians convened for the third-annual Rock Lottery, a unique musical concept where a group of unrelated musicians form five bands and create three to four original songs within 12 hours. It all takes place in a mere half a day and ends with each new band performing at Headliners that evening. The inaugural event was 22 years ago in Denton, Texas, and has since generated sister events in 14 cities around the world. Louisville has musician Craig Pfunder (VHS or Beta, Jake Shears) to thank for bringing the event to Possibility City, where each year he tasks himself with handling the logistics, choosing the initial musicians and selecting the charity receiving the ticket sale proceeds — this year it was The Lee Initiative, which aims to bring more diversity and equality to the restaurant industry. With lessons learned from each previous event, the Rock Lottery seems to get more streamlined, but the anticipation and anxiety felt by the performers remains.

10 A.M.
Show Up Then Ship Out
It’s midmorning but early enough on a weekend that this year’s participating musicians shuffle in with a low hum and head straight for the coffee and muffins. The initial Rock Lottery meet-and-greet is like a high school reunion where you may recognize faces or remember names but have no clue as to what they do. Most of these musicians have never performed together, making this event partially about community building through music. Some play out regularly and some play only in private practice spaces as midlife responsibilities take priority. Regardless of their current musical career status, they are all prepared for a whirlwind of music making.

For the lottery, each participant’s name is placed in a hat, except for the chosen five drummers, who act as band leaders for each group and, in turn, randomly begin to draw members. The touring drummer for Jim James’ solo performances, David Givan, steps up to the spaghetti Western-style hat, dramatically lit by spotlight, drawing the first name: “Jeremy Johnson.” Heat Machine’s Greg Morris goes next with “Juliana Rodriguez,” Matt Boyle of Cereal Glyphs says “Mary Brown,” Batwizard’s Adam Colvin grunts “Chea Beckley,” and the final drummer Anne Gauthier — producer at La La Land Studio — says “Allie Summers.” Names are called until all bands are formed, and quick chitchat begins of who plays what, and the type of music they play. Pfunder interrupts by saying, “I need a band name before you leave here to practice. And, I need to know where you’re practicing.” The room chuckles in response.

It’s always easier to come up with a band name when you’re not thinking about it, but this first task of thinking about it baffles the group’s majority. “Should we call ourselves The Who?” someone jokes. “How about Mature Gambino? You know, I read he used some random app to come up with Childish Gambino,” offers another. Eventually, someone says, “This is the hardest part.” Ten minutes pass, and the question is posed to Pfunder: “Do we need a band name right this second?” The answer, “Yes.” One by one the names are determined. Riley Day (after Riley Day-syndrome and its noted symptom of insensitivity to pain), Cyprus 5, Dream Monitor Mix, Soap Opera Villain and Dreamlines, with the comment, “it sounds like a cruise ship,” and the retort “or a really good band!”

After a quick deliberation of who has adequate practice space, with some giving directions to places as vague as “on the door there’s a sign that says ring the bell,” everyone ships out to write original music for the next eight to nine hours with relative strangers.

11 A.M.
Practice ‘Till It Hurts
Cyprus 5 unloads their equipment into La La Land studio and immediately sets up to start strumming, striking and bowing. Yes, indeed there is a fiddle player amongst this group of electronic and psych-rock musicians. “My fingers are cold,” exclaims fiddler Allie Summers of the band Dietrich Jon. Bass player Andrew Peace (Seluah) eyes Patrick Bucayu’s Korg keyboard and says, “I don’t know how to work that.” Bucayu (of Kabuwe) says, “It’s pretty simple,” to which Peace replies, “I’ll give it a shot.” Collaboration is paramount in completing this task in such limited time and everyone is remarkably agreeable.
“What key do you want to play in?”
“Let’s start with a cover to get warmed up. Tom Petty is always good.”
They choose “Mary Jane’s Last Dance” and awkwardly give it their best for a first time run through with unfamiliar peers.

Dreamlines meet at the Cat Casual space to which drummer Dave Givan remarks, “This is a live room.” Everyone with an instrument begins playing. Givan takes off his shoes, removes everything from his pockets and stuffs it in his knit beanie like a makeshift hippy purse. Julia Purcell (Maiden Radio) studiously writes lyrics in her notebook, and William Benton (Cat Casual) pushes pedals with his square-toed boots. The soft-spoken Purcell candidly tells me, “As a folk singer, I’m a little intimidated by the genre because I don’t know if I can rock.” She laughs. I ask W.G. Rickel (Future Killer) if he’s scared, and he replies with a slow head shake no and, “There’s much scarier things in life.”

The band Riley Day has the smallest space, with people bringing the most gear. Morris keeps a steady beat on drums the entire time, and Juliana Rodriguez (Los Dolores) experiments with keys, to which guitarist Shadwick Wilde (Quiet Hollers) says, “Yeah, that.” Wilde continues, “I think we could do something droney here,” and minimalist Mark Kramer (Tender Mercy) replies with “I’d be into that.”

Dream Monitor Mix meets in Old Louisville in a gorgeous church that has been turned into a residence. Warmed by dual wood burning stoves and the fiery passion of guitarist Mary Feiock (Jaxon Lee Swain, Juanita), this place is indelibly sacred. There’s a nervous energy in the room, evident by Feiock asking the prayer-like question, “Oh God, is this what I signed up for?” Folk guitarist Nathan Salsburg has a reassuring gaze, while his fingers effortlessly pick his six-string. He gently says, “You sound amazing.” Keyboardist Zach Driscoll (Wax Fang, Maximón, The Deloreans) patiently conducts and instinctively knows when to insert his ascending glissando, adding to the songs crescendo. When the song breaks and Feiock begins her fierce guitar solo is when things really begin to heat up.

Soap Opera Villain has the advantage of practicing on Headliners’ stage, where all the bands will perform that evening. Adam Colvin has the angry face and forceful strike of a true heavy metal drummer, while three guitars and one bass flank his drum kit. They are the loudest band, but with Zach Longoria’s R&B background there’s bound to be a smaller amplitude of sound eventually.

10 P.M.
Show Time
The audience mills about, ready to support their family and friends who chose to be a part of this courageous and enjoyable experiment. Several of the musicians are chatting with people about how much fun they had or how nerve-racking it was, but they are now prepared to take the stage.

Cyprus 5 are the most ambitious with four originals and a cover of the disco hit “Funky Town,” with Summers bowing that fiddle and shaking her hips to much applause and shouts of admiration. Riley Day features their three lead singers on separate songs very much in style of what you would hear on their individual records. A highlight being Kramer nodding his head in an almost rocker fashion. Soap Opera Villain played to Longoria’s strength of hand-raising soul singing with an added touch of Moore’s fuzzy guitar riffs. Dream Monitor Mix deliveres a sharp set that only intensified when Feiock howled, “I’m leaving you behind, I’m leaving you high and dry like a mother fucking church fire.” Bonus points for Brian Schreck adding saxophone and a magical flute solo to the mix. Finishing the evening was Dreamlines, where Purcell took center stage with a banjo, partnered with troubadour Benton and the psychedelic Rickle. Purcell found her rock, even if it was for just one night.