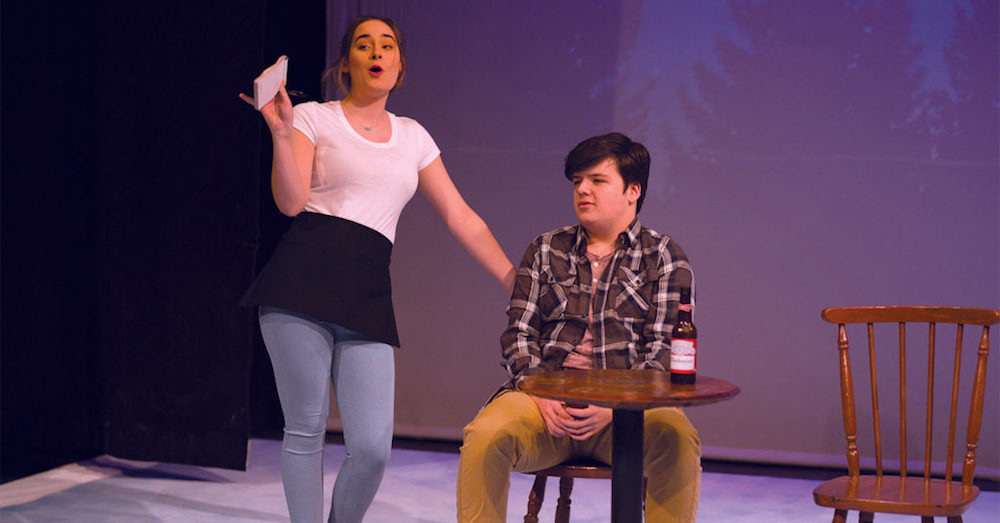 In the fictional town of Almost, Maine, nine couples fall in — or out — of love within the same 10 minutes. Old friends finally admit their feelings for one another. A married couple realizes they’ve fallen out of love. One woman returns to answer a question several years too late. The John Cariani play, as put on by Louisville’s Commonwealth Theatre, weaves these stories together in an interconnected way. We never see the same couple twice, but we hear names from one scene referenced in another, so it feels a little like the kind of interconnected rom-com story inspired by movies like “Love, Actually” or “Playing By Heart.”

Much of the story feels down-to-earth, focusing on simple, character-based stories in a small town, and the minimal set design (created by Clay Marshall) helps to add to this feeling. But it’s also peppered with magical realism. A widow named Glory (Samantha Bliss) describes her heart as broken and then reveals that she’s carrying around actual slate shards of her heart. Bliss later plays a woman named Gayle who returns physical bags full of “the love you gave me” to her boyfriend Lendall (Jude Stivers), tired of waiting around for him to propose. Two men on a fishing trip, Randy (Roscoe Lindsay-Bruns) and Chad (Field Oldham), quite literally fall when they fall in love with each other… and keep falling.

Meanwhile, the Northern Lights play across the sky, adding to the lightly magical atmosphere and the feeling that love is “in the air.”

It’s the perfect play to prepare for Valentine’s Day next month, which is why it’s not wholly surprising that Commonwealth isn’t the only theater that decided to pick it up this winter. In fact, just five days after the closing of Commonwealth Theatre’s production of “Almost, Maine,” UofL will put on their own production. And it is not alone. In the past couple of years, “Almost, Maine” has become one of the most produced high school plays across the country. It’s light but deals with painful topics; and it is family-friendly but witty. The characters are quirky and interesting, and every relationship is different.

Commonwealth Theatre’s production was wholly comprised of high school students, from duPont Manual, St. Francis, YPAS and Trinity High School, to name just a few schools. But each of them has years of experience (no less than five years for every actor) with the Walden Theatre Conservatory, a pre-professional theater program for students that’s nationally recognized. So, the performances felt almost professional.

Bliss rattles off frantic, wordy monologues that would fit right into “Anne of Green Gables” or “Gilmore Girls.” Oliver Cox’s performances were quiet and a little aloof, though he proved in “The Story of Hope” the impact that he could deliver in what his character didn’t say. Lindsay-Bruns and Cicely Warren showed off their chemistry in “Sad and Glad” as a pair of awkward exes, one of whom has moved on while the other still misses their partner.

Many of the vignettes in “Almost, Maine” are cute and magical, but the show doesn’t shy away from failing marriages, missed opportunities or miscommunications. Not everyone has a happy ending and not every pair fits together perfectly. But every story of love feels familiar in some way. •

The Tilted Crown is a fairly young, grassroots theater company, still not well known throughout the Louisville theater scene. Scott Davis, director of its production of “Beirut,” however, is an established theater vet and theater teacher, with productions from Liminal Playhouse as well as the Alley Theater Arts Caravan on his resume. Together, they put on a thought- and sense-provoking show that was gripping as often as it was uncomfortable. It closed Jan 20 at The Bard’s Town.

The show was not uncomfortable because of the performances, but rather because of the nature of the story. A post-apocalyptic America has become heavily sexphobic, outlawing sex altogether while half the population is quarantined for a mysterious STD that spreads through spit and sweat as well as sex. It’s an ugly society, and it breeds ugly views on sex, on women and on life in general. There’s misogynistic language that makes you wince. There are naked bodies. There are guards of the quarantined “positive” patients who take advantage of their positions in crude, disturbing ways. The two main characters, Torch (Spencer Korcz) and Blue’s (Leila Toba) interactions are hard to watch at times because they’re so packed full of explosive emotions, of love, of frustration, of hate and of fear.

They’re also stunning at other points. Torch and Blue are a couple and clearly love each other. They also can’t have sex, because Torch is “positive” while Blue is negative. (I found myself wondering throughout the show if the disease even existed — Torch has shown no actual symptoms — or if it was manufactured by the government in this world, but this was never explored.) So every touch, every look and every advance toward each other is heightened both with passion and with danger. The actors pull it off. There never seems to be a calm moment in this show. Every second is saturated with the risk of pain in any loving relationship amplified by 100.

Besides the cutting story and the acting, one thing that stood out to me was the detail of the set and costumes. Like Torch’s small apartment/prison, “Beirut” is covered in filth and disarray so convincingly that upon walking into the room at The Bard’s Town’s theater venue you almost forget it’s a stage. There’s also a hole in the back of Torch’s underwear — no plot significance, but it helps the scene to feel more authentic.

The Tilted Crown may be just starting out as a Louisville theater company, but they know how to make an impression, and I expect they’ll only continue.  •