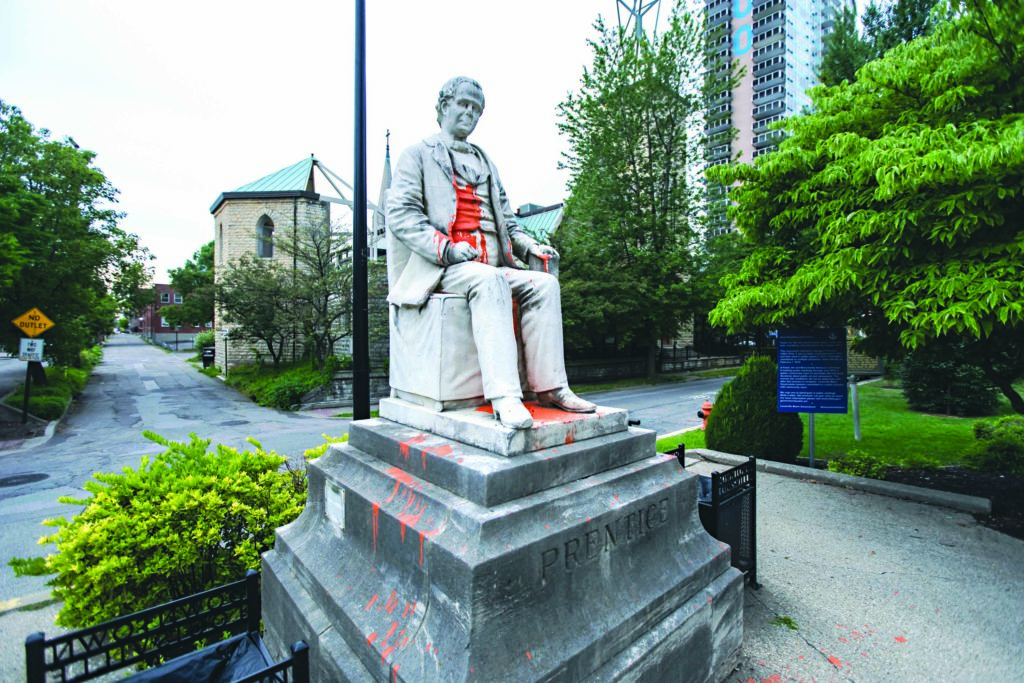 Finally, the city is moving one of its controversial statues. The George D. Prentice statue behind the library downtown will be sent to storage, the Mayor’s Office said Monday.

The announcement comes some five months after Mayor Greg Fischer said in August that the Prentice and the John B. Castleman statues would be moved.

No word on the future of the Castleman statue, which has been defaced several times.

Fischer had said the two might be taken to Cave Hill Cemetery, where both men are buried. “Cave Hill declined to have the Prentice statue moved there; the city is still in discussions about moving the Castleman statue there from its existing Cherokee Triangle site,” the Mayor’s Office statement said.

“Mr. Prentice used his position as founder and long-time editor of the Louisville Journal to advocate an anti-Catholic, anti-immigrant message that led to the 1855 Bloody Monday riot where at least 22 people were killed,” Fischer said in the statement. “His statue is especially inappropriate outside the library, a place that encourages education, inclusiveness and compassion.”

There are no plans yet for a Prentice statue replacement. The statement said that “any proposed artwork or monument would go through the city’s process for ensuring that our public art and monuments respect our history but reflect the values of today.”

Read LEO’s past coverage of the issue, including the role of Prentice in Louisville’s Blood Monday, immigrant hatred 163 years ago.

Can we finally take down the Castleman statue now?

The John B. Castleman and George D. Prentice statues – We asked you:
‘what will replace them?’

Also, last week, we gave Fischer a thorn for waiting so long to move the statues.