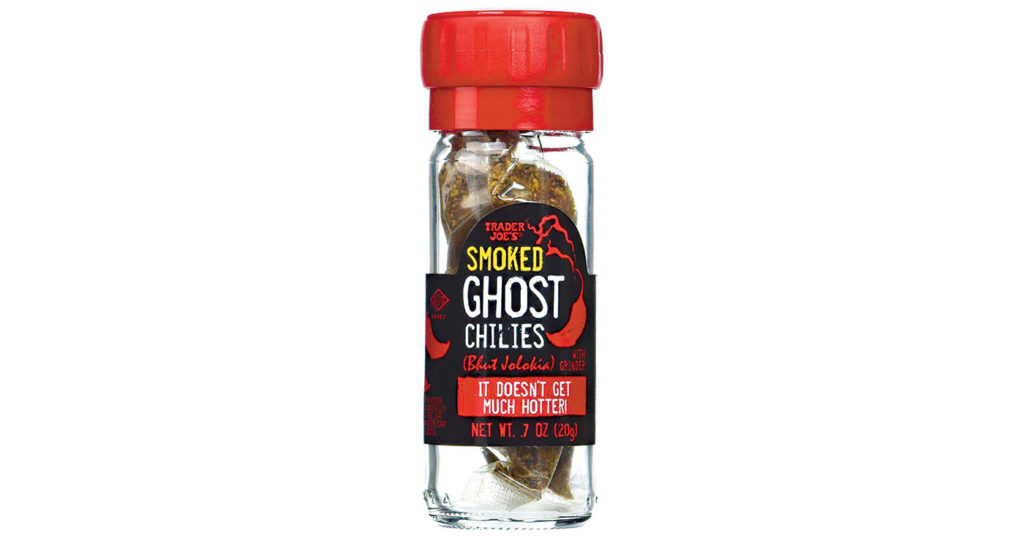 My friends know of my affinity for hot sauce, hot chili peppers and anything spicy. I enjoy the heat, and I like to punish my palate with it.

It wasn’t always this way.

I remember being 11 or 12 and adding too many red pepper flakes to my pizza, to the point that I couldn’t eat it. And, like an idiot, I had peppered the entire pizza before diving in rather than doing one slice at a time.

But I grew into the spice, so much so that my friends tip me off when they come across spicy, new products they think I would like. A few weeks ago, my friend Laura texted me a photo of something she’d purchased at Trader Joe’s: smoked ghost chilies in a red and black pepper grinder.

Intrigued, I made my way there a few days later to check out this product in person. It was around $5, so I didn’t hesitate to add it to my handbasket and take it home with me. I was eager to try it, even though ghost peppers are generally out of my range in terms of the level of heat they bring. But the flavor is wonderful, so I find ways to survive.

The red top of the grinder insinuates heat right off the bat, and the black and red Trader Joe’s label helps drive home a bit of a ghostly feel, offering mystery before you even open the product. The label, which is adorned with clip art peppers, warns, “It doesn’t get much hotter.”

Turn it over and, on the other side, in ascending font size, are the bright red words, “Hot, hot, hot.” Under those words is this message: “Caution: Do not touch your eyes after handling these chilies.” Buyers also are warned to avoid sprinkling the peppers over a steaming pot. I mean, they’re serious about this stuff. And for good reason.

Inside, I found that the chilies were wrapped in a small plastic bag, a practice I’d not seen before with pepper grinders. Was it to maintain freshness? They’re dried and smoked peppers — it doesn’t seem to me they’ll be spoiling anytime soon. And what sort of bacteria could even live with those peppers?

Or was the bag to ensure that the fiery peppers didn’t burn through the relatively thin glass of the grinder? Probably not the reason, but it’s still a menacing thought. And make no mistake, I was extremely cautious when opening the bag and pouring the peppers into the grinder.

Let me just say that the aroma of these things is almost overwhelming — classic bhut jolokia, with the bright, citrus tones, eye-watering intensity and just a touch of smoke added to the mix. But, boy, do you learn quickly what you’re getting into with a whiff of this before you ever have a taste.

Once they were safely sealed, I decided to first try the peppers in a bowl of canned soup, this one being a favorite quick lunch in Campbell’s Chunky gumbo, which is always begging for added spice. I gave the grinder a couple of turns over the pot as the soup warmed and stirred. The flakes don’t look much different than the red peppers you get at the pizza joint, albeit smaller, but it took me exactly two bites of soup to realize I had, to use a football term, outkicked my coverage.

I began to sweat, my mouth began to burn, and it wasn’t long before I was struggling to get through my soup. Yes, I made it, but I learned that two turns of the screw are too many, no matter how good the flavor might be. I now refer to this event as the “Opening of the Sinuses Incident.”

About a week later, I had a slice of leftover pizza and decided to try again. This time, it was more like a single turn of the grinder -— be forewarned that you’ll get a lot even with a single rotation -— and I had the misfortune that several of the flakes landed in a small pile. Overall, I hadn’t overdone it too badly with the one-turn approach, but that one bite with the pepper pile was a doozy.

Just for fun, I decided to do about a quarter turn into my palm and lap it up before writing this column, just to remind myself of the flavor. As I type this, my tongue is still feeling vibrant and alive. And mildly on fire.

Proceed with caution, but if you like the flavor of ghost peppers, do proceed. You won’t be disappointed with the Trader Joe’s Smoked Ghost Chilies. •

(Note: Scorpion chilies and reaper chilies versions are available — how brave are you?)