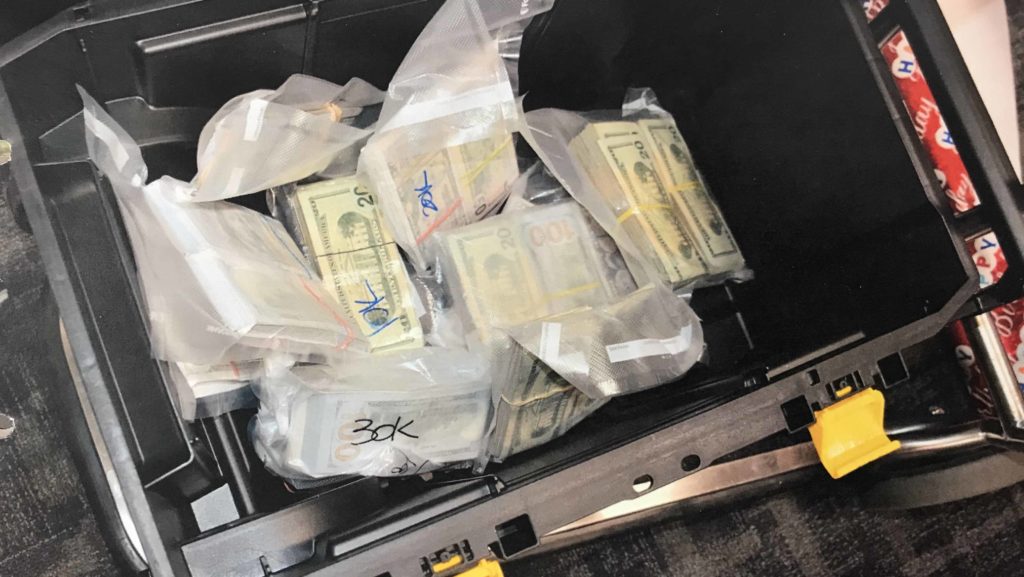 A housekeeper at a St. Matthews hotel happened upon the stacks of cash, sealed in shrink-wrap and stashed in room 403.

Alongside a money counter and a lock box, it seemed suspicious. Hotel management called St. Matthews Police, who examined the cash and suspected it was tied to drug trafficking.

That single bust brought in more cash than other agencies, like Paducah or Somerset police departments, did in five years of seizures. But while officials in Paducah and Somerset reported seizure details to the state every year since fiscal year 2013, St. Matthews never reported at all.

But it’s unclear just how much was actually taken. Of 323 law enforcement agencies listed in statewide data, only 11 percent reported the details of their seizures each year, as required by law.

The lack of reporting stems from ignorance of the law, insufficient oversight and, sometimes, a breakdown in communication with state officials, according to interviews with officials at more than a dozen agencies across Kentucky.

Whatever the reason, the dearth of transparency troubles lawmakers, police proponents and civil liberty advocates.

“Transparency is vital,” said Robert Frommer, senior attorney with the Institute for Justice, a Washington, D.C.-based libertarian advocacy group. “Without knowing what’s going on, you can’t make sure police are pursuing justice, rather than profit.”

In Kentucky, Frommer said law enforcement need only a “slight evidence of traceability” that property is tied to illicit activity in order for it to be subject to forfeiture.

“That’s an incredibly low standard,” he said. “The deck is stacked against property owners.”

State law says any proceeds presumed to be related to buying or selling drugs are subject to forfeiture.

This means any cash gained from the drug trade or property used to make or store drugs could be seized by police.

When St. Matthews Police detectives took the hotel cash in February 2018, they filed a civil suit against the man renting the room — and his codefendant was $193,049 in United States currency. They brought no criminal charges.

The man was arrested months later and charged with drug trafficking in another county, according to court records. But there was no mention of that drug arrest when a judge ordered that St. Matthews Police could keep 85 percent of the seizure and kick the rest to the prosecutor’s office.

“It puts in place a perverse incentive that makes Kentucky particularly vulnerable to instances of corruption and abuse of power,” Miller said.

The funds are released after a criminal case is resolved or a judge orders it.

Law enforcement agencies that submitted required reports to the state’s Office of Drug Control Policy kept $17.5 million in seizure funds in that five-year span, according to state data.

From a law enforcement perspective, the seizures help bolster budgets, said Independence Police Department Chief Anthony Lucas, who is also president of the Kentucky Association of Chiefs of Police.

But Lucas’ own agency also failed to report three years worth of seizure data. Lucas said he wasn’t aware of that.

The law requires agencies to report to the state’s Auditor of Public Accounts and the Justice and Public Safety Cabinet a “detailed listing of all money and property seized.”

A review of data provided by the Kentucky Office of Drug Control Policy, part of the Justice and Public Safety Cabinet, shows the Louisville Metro Police Department reported seizing $19.4 million in cash in five years — more than half of all reported cash seizures statewide, according to the data. The LMPD also seized nearly 350 vehicles and more than 6,400 guns.

The Jeffersontown Police Department also submitted reports each year, showing just more than $1.7 million in cash, 115 vehicles and 192 guns seized in five years, according to the data.

But the vast majority of Kentucky’s law enforcement agencies report sporadically, if at all.

Numerous law enforcement agencies contacted by KyCIR confirmed they have been seizing cash, cars or property without reporting — such as St. Matthews, where the police didn’t report that hotel seizure or any other seizure in likely a decade, according to Maj. Eddie Jones.

Jones said the failure to report was “just an oversight,” and his department began working to get in compliance after a reporter asked.

He doesn’t expect any consequences for years of failing to follow the law, though.

“I think [state officials] are just happy to get another agency on-board,” he said. “If there are ramifications, they’re not enforced.”

Wynn said in an emailed statement that the Office of Drug Control Policy collects forfeiture reports “to the fullest extent allowed by law.”

“Kentucky law makes clear that the responsibility to report asset forfeiture rests solely with the local agency, and it does not provide any enforcement mechanism to ensure compliance,” Wynn said in an emailed statement.

Wynn said the law’s language as written “does not establish any process for the [Office of Drug Control Policy] to assert enforcement authority.”

State law says agencies that don’t report “shall be liable to the state for the full value of all property and money so seized.” The Attorney General can institute civil actions to recover the money, the law says, and the auditor’s office or Justice and Public Safety Cabinet secretary could initiate an inquiry.

A spokesperson for the Auditor of Public Accounts said only two agencies have submitted reports in the last year, outside of those departments under audit.

Terry Sebastian, spokesperson for the Kentucky Attorney General’s office, said neither state agency has contacted his office about initiating an investigation for failing to report.

Wynn said the department sends postcards and other notifications reminding agencies of their duty to report.

But in Bullitt County, the lead narcotics officer at the Sheriff’s Office said he still didn’t know about the requirement.

Bullitt County reported seizing just more than $108,000 in the 2016 fiscal year. But it didn’t report anything in the other four years reviewed by KyCIR.

Lt. Col. Mike Halbleib, who commands the agency’s drug task force, said he didn’t know who filed that 2016 report or that he needed to report to the state.

In Letcher County, the sheriff’s department filed reports for four years — a total of almost $145,000 — but submitted no report for fiscal year 2017.

“I’m going to plead ignorance. I don’t have a clue what that law is,” said Letcher County Chief Deputy Barry Engle. Engle said he was recently promoted to the chief deputy role. His predecessor was convicted for stealing guns and cash from the evidence locker.

Both Halbleib and Engle said they’d reach out to state officials for guidance after being contacted by a reporter.

The Kenton County Sheriff’s Office has seized assets, but failed to report twice between 2013 and 2017, according to Jerry Knochelmann, the agency’s chief financial officer.

“It was probably just an oversight on our part,” Knochelmann said. “I’m sure it was.”

Other officials blamed prior leadership for failing to report seizures to the state.

In Calloway County, the sheriff’s office didn’t disclose any seizures for the 2013-16 fiscal years.

“I don’t know why the other sheriff didn’t report,” said Calloway County Sheriff Sam Steger, who took office in 2015.

The lack of reporting from law enforcement agencies across the state surprised and shocked Chip Nowlin, president of the Kentucky Peace Officers’ Association.

He said oversight is critical to avoid abuse and ensure checks and balances.

“They better have everything on the up and up, otherwise it could be bad,” he said. “I would think there would be quality control.”

Others agencies contacted by KyCIR insisted they did report their seizures, but the Kentucky Office of Drug Control Policy didn’t include their data in its annual report.

The report was sent to state officials soon after the fiscal year ended, he said.

Wynn, the spokesman for the state’s Justice and Public Safety Cabinet, did not address the discrepancies. In a statement, he said that “if any agency believes that past reports were not received, we will always accept reports retroactively.”

In Legislature, Some Talk, No Action

While the issue has drawn criticism, it hasn’t gained much traction in Kentucky’s legislature.

State Rep. Diane St. Onge, a Republican from Fort Wright, proposed a bill in 2016 that would have removed some funding from agencies that didn’t disclose their seizures to the state. But it died in the House Judiciary Committee without a hearing.

But, he said “it’s obviously a problem” if agencies aren’t reporting as required by law.

“It’s not complicated,” said Westerfield, who has worked as a prosecutor in Christian County and completed forfeiture requests. “You just fill out some paperwork.”

Westerfield said he considers the current law to be sound, and he supports the premise of asset forfeiture.

“It’s an important tool for law enforcement and prosecutors,” he said. “But it can’t be recklessly abused.”

State Sen. Damon Thayer, a Republican from Georgetown and majority floor leader, said “there is a movement” of people from both sides of the political aisle looking to institute some asset forfeiture reform. And though he doesn’t consider himself part of it, he does support examining existing laws and “potentially making changes.”

“Because I don’t think it’s right for law enforcement to be able to take assets from an individual who’s accused of a crime if they haven’t yet been found guilty,” he said in a recent interview.

And Thayer said the lack of reporting from law enforcement agencies across Kentucky makes “it hard to get a real handle on the issue.” He said he would support studying the issue if his fellow Senate Republicans wanted it.

Outgoing State Sen. Ray Jones II, a Democrat from Pikeville, expects any reform related to asset forfeiture to be met with reluctance from prosecutors and law enforcement agencies who have come to depend on the practice to help bolster budgets. Jones, who served 18 years on the Senate Judiciary Committee, said the practice shouldn’t be used to fund the state’s criminal justice system. And more so, he said it raises ethical issues when prosecutors and law enforcement agencies — who are directly involved with determining what is seized and forfeited — benefit from the program.

“Until you adequately fund state government agencies, I think you’re going to see a lot of reluctance,” he said. “It will be hard to pass any kind of reform on asset forfeiture.” •

This story is part of a collaborative reporting initiative supported by the Pulitzer Center on Crisis Reporting.