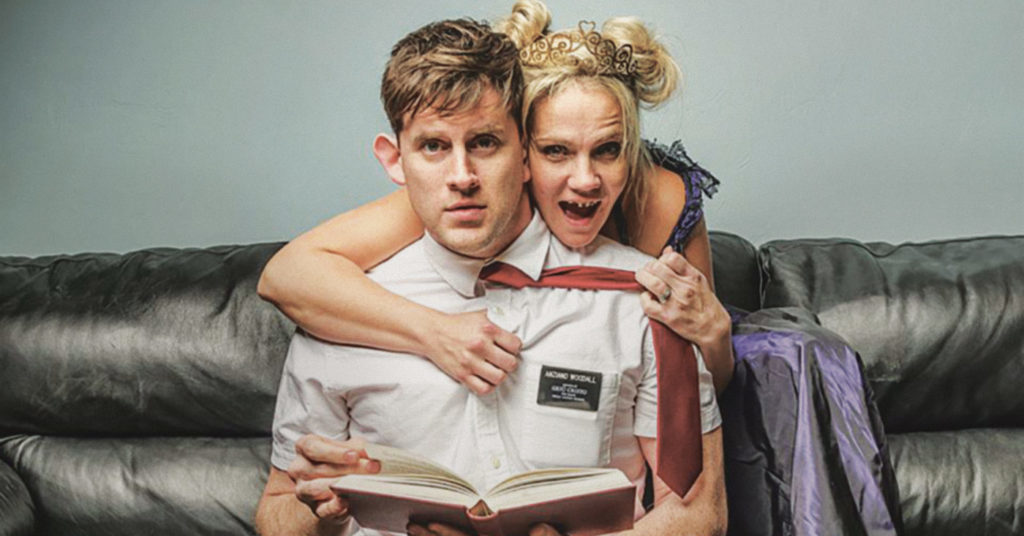 LEO: You had totally different childhoods.
Jessa Reed: My dad lived in Delaware, and my mom lived in Oregon. … I would spend a few years in one and then move back to the other one. I would go to Portland and fuck my life up, then move back to Delaware to put it back together. After awhile, I’d get bored and go fuck it up again. I was terrible at school. I got molested. … Yeah, childhood was pretty rough.

Aaron Woodall: Totally different childhoods, in that my home was stable. I was never exposed to drugs or alcohol. As a teenager, I was forbidden to date girls. It was a really sheltered childhood. As it turns out, a sheltered childhood doesn’t prevent you from getting molested, though. And that’s something we have in common.

How did you meet?
JR: Aaron and I first met at a comedy festival in 2014, when he was still a full-blown Mormon. We were just Facebook friends for awhile. Then, he went through a divorce and became my favorite person to follow on Facebook. He live-Tweeted his heartbreak. It was beautiful!

AW: I was in the middle of an identity crisis. My entire life I had been a Mormon, and I didn’t know who I was anymore. She recognized that crisis as the same as when she quit meth. That was her lifestyle. Everyone around her was tweakers and dealers. When she quit, she had to reintegrate into society. She had to completely start from scratch, which is exactly what I was doing. Mormons and meth-heads are both social outcasts in opposite ways. So, all of the things that people found weird about her, weren’t that crazy to me. You might believe in aliens or something. That would be, like, the fifth weirdest thing all of my Mormon people believe in. I’ve been immersed in crazy my whole life, Jessa is just a new kind of crazy.

JR: He’s about 10 years younger than me. He was getting divorced and leaving Mormonism around the same time in my life that I left meth. I really related to what he was going through. It was kind of the same process of reentering society but completely different. I was shoving a monster back into a cage, and he was letting one out. I had to get a job and get my driver’s license back. He had to learn how to drink beer and fuck doggy style.

How’d you bring all that pain to the podcast?
JR: He came up with the idea a year ago for the podcast. … Our comedy is similar, in that it’s very raw and vulnerable and honest, so we’re compatible in that way. … We talk about the intimate details of the most painful things that have ever happened to us — but it’s hilarious. I call it, ‘the funniest podcast about trauma.’

AW: We are like yin and yang. We’re exactly the same but complete opposites. We’ll talk about the same topics, like drugs. We have the complete opposite perspective on it. She’s telling jokes about a lifetime spent doing hard-core drugs and how terrible it was. I’m out there as 30-year-old who has just tried weed for the first time. I’m like, ‘This is great, everyone should try this.’ Everyone else is like, ‘We have. You’re the weird one here.’