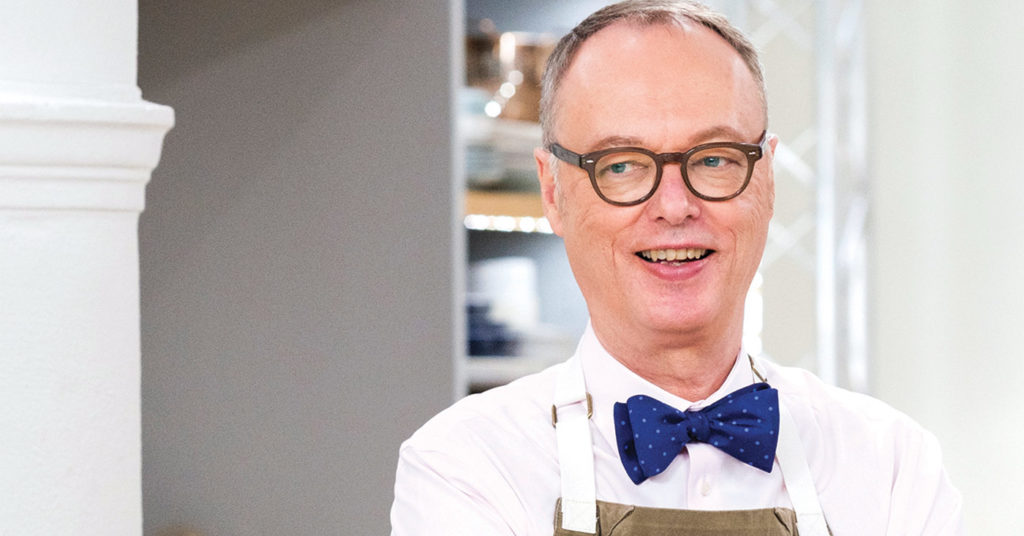 Christopher Kimball has been a multimedia cooking expert for decades. Back in the ‘80s, he revived and updated Cook’s Magazine for a new generation. Cook’s Magazine and its quasi-successor Cook’s Illustrated became models for serving readership a feast of content that de-emphasized the roles of advertisers in culinary periodicals. Then, he was the primary figure behind “America’s Test Kitchen” on public television. A couple of years back, there was a shake-up in the organization behind this and related ventures, and Kimball felt the need to start a new company, named after its address: Milk Street in Boston. Kimball appears regularly on public radio and a podcast now, along with a bimonthly magazine (that accepts no advertising).

At his appearance this week, he’ll discuss and sign “Milk Street: Tuesday Nights.” The concept is the rapid preparation of delicious recipes from around the world — all so that a workday supper can seem like a special weekend dinner. The author spoke with LEO by phone and we started by asking about the structure of the first few chapters, which start with main courses that require 45 minutes — and the time gets shorter and shorter.

LEO: Starting the book off with ‘Fast,’ ‘Faster’ and ‘Fastest’ — how did that idea come to you?
Christopher Kimball: The problem is, what one person considers fast, somebody else doesn’t. Years ago, I had recipes tested by my CFO, because it took her 20 minutes to chop three cloves of garlic. The division into three groups is just to give people a sense. You’re assuming they have some facility in the kitchen and it doesn’t take them half an hour to find all the ingredients.

You seem to have a pepper for everything! Is that one of the basic tenets behind getting bold flavor quickly, without a lot of prep? Were you into spicy food as a child?
Spicy food? We had salt, we had pepper, we had Lawry’s Seasoned Salt. So… no. If you want to improve the flavor of your cooking, the easiest thing to do is expand your spice pantry and get four or five additions. An additional pepper, like an Aleppo pepper. A spice blend would be helpful. Also, getting some whole spices, like cumin or coriander — you can toast them and grind them up or use them whole depending on the recipe. They keep their flavor longer. If you toast them, it blooms the flavor. Just having a few more spices on hand — smoked paprika is fabulous.

What was the first spicy food that you fell in love with?
It was probably a really bad, shopping-center Chinese restaurant in the 1960s. That was our first introduction to another cuisine. The classic Cantonese dishes. It was much later on, the revelation for me: that chiles add flavor, not just heat. That was the first big moment for me. You realize they add fruitiness. I’m not a big fan of heat just for the sake of heat.

Is there a basic dish — a taste of home — that you always come back to?
I find this style of cooking so liberating and so wonderful, I’ve pretty much changed the way I cook. Whole-wheat soda bread, apple pie, New England breakfasts — all that stuff’s great. But when it comes to main courses for dinner, I’m not making meatloaf anymore. I’m doing recipes that have a lot more interesting balance of flavors and textures. I can make mujaddara — rice and lentils and fried onions — in 15 to 20 minutes, and that would be my go-to dinner.

The start of ‘Milk Street’ must have undergone some effect from the legal disentanglements from your previous venture. Any lessons learned that you’d care to share from the last couple of years?
I had an opportunity to start over…starting from scratch, we spent months thinking how you express the brand in radio or television or print or whatever. What is at the heart of it? What does it look like or sound like? The lesson for me was making sure that you have a very clear, distinct notion of what your brand is and what you’re offering people, so that when you go out and do all this other stuff — we stood up a lot of stuff quickly, but we knew at the core what we were trying to achieve. We live in an age where people want to belong and participate in brands, right? And also, smaller is better … people want an intimate experience with a brand. Really understanding that at all levels is crucial to success. It’s an ongoing discussion, but I think we did a pretty good job of drawing the wagons and creating the circle and figuring what’s in and what’s out. And, you have to really care about it. If you don’t, the public doesn’t show up.