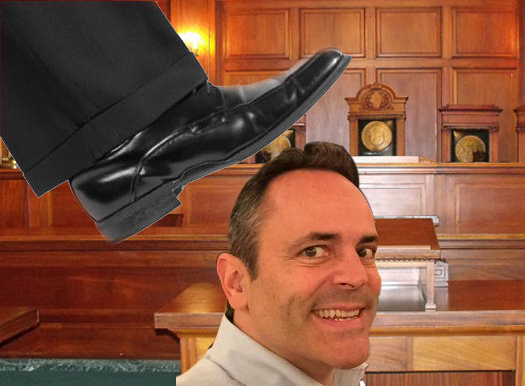 It has been long said that federal special prosecutor Robert Mueller never comments but “speaks through his indictments.”

Recently, the Kentucky Supreme Court might have spoken too — in this case through its calendar.

In an unprecedented extra November rendition (court-speak for a release of decisions), the court dropped major decisions upholding the legislature’s recent right-to-work law and striking down mandatory review panels for medical malpractice cases before they can go to trial.

The importance of these two decisions may have drowned out a quiet rebuttal to Gov. Matt Bevin’s repeated attacks on the judiciary.

Why I think this — and I admit my hearing on issues of the judiciary might be oversensitive — requires a brief review of recent history:

From the beginning of his time in office, Bevin has been at war with the courts. And it has become clear that he has no idea how they work. (Or how the constitution, the legislature, the press or his own office works. Throw in higher education, the African-American church, aluminum processing, painted rocks and TV zombies while you are at it.)

He thinks every court decision he loses — and he loses a lot — reflects on him and the substance of his policies. Decisions citing legal constraints, such as statutes and constitutional provisions, are just wordy excuses to rebuke him.

Three weeks ago, he told a conservative radio host that if the Kentucky Supreme Court strikes down the pending pension-reform act he pushed through the legislature, the court would be ignoring the pension crisis and “poking the legislature in the eye.” (OK, he also doesn’t know how metaphors work).

This neatly capsulizes Bevin’s strange view of the courts as bodies that decide statutory and constitutional cases based on the “rightness” of the underlying policy and the judiciary as an institution engaged in the cut-and-thrust of politics.

(The interview continued with more Bevinesque gibberish about “legislators run amok,” where he had to clarify that the amok legislators were not the ones who cannibalized a sewer bill in the last hours of the session, shoved a pension bill no one had seen into the carcass and passed it with only 49 votes. Instead, they were past legislators — Democrats no doubt — who let the pension system be underfunded. The irony is that the pension bill is being challenged for violating constitutional provisions that were specifically designed to prevent legislators from trotting the road to amok town).

Just days after the governor’s words, the Kentucky Supreme Court did a curious thing. On Nov. 14, the court’s clerk sent out a one-line press release announcing that “to ensure expeditious rendition of opinions” it had “scheduled an additional rendition” the next day at 10 a.m.

In 20 years of academic court-watching, I have never seen any extra rendition days — and the prior nine years of Supreme Court calendars archived on the Kentucky court website partially confirms this. When the decisions were rendered the next day, only three decisions were listed in the minutes, but the two mentioned previously made headlines.

But a few things about those two cases were striking. First, they were decided on weighty constitutional grounds. Second, in both cases, the Supreme Court upheld decisions by both judges of the Franklin Circuit Court.

The Franklin Circuit has been a special target of Bevin. One of its two judges, Phillip Shepherd, has been repeatedly attacked as a “political hack” for ruling against Bevin, something that has caused the bar to rally to his defense. Just this September, Bevin renewed his abuse of the judge, claiming Shepherd was a partisan for registering Facebook “interest” in a political rally near the judge’s home in Frankfort. Shepherd said his real interest was in his car “not getting blocked in by a U-Haul truck.”

Yet the med-mal review board case upheld by the Kentucky Supreme Court was decided by Shepherd.

Moreover, the Supreme Court made a special point of highlighting the independence of judicial power to review the constitutionality of acts of the legislature:

“To characterize [as Bevin’s lawyers did] certain sections of the Kentucky Bill of Rights as applying only to the judicial department [as Bevin’s lawyers did] … is to ignore the common understanding of the original framers and the original meaning of the words they employed — all branches of government can oppress the people and such oppression must be guarded against.”

“All branches can oppress.” Loud enough for you, Matt?

That includes, perhaps, a governor who presses unconstitutional measures and legislatures that pass laws in contravention of the Kentucky constitution’s carefully designed measures to promote transparency and honesty in the legislative process.

The release of these two decisions in November cleared the way for the drama of the Dec. 19 rendition day when the fate of the 2018 pension/sewer bill likely will be decided. Once again serious constitutional issues are to be interpreted. And an initial ruling from Franklin Circuit Judge Phillip Shepherd will be upheld or overturned. It’s just a guess — a legally informed guess — but I don’t think the governor is going to be happy with what the Supreme Court puts in his Christmas stocking.

One thing is clear. All the social media posts and talk-radio rants haven’t quieted the judiciary.

All branches of government can oppress, and the state Supreme Court accepts that its job is to interpret the constitution and thereby guard against that oppression.