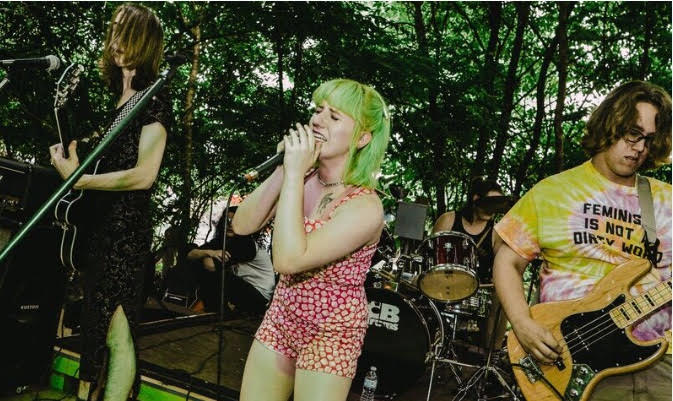 Louisville has no shortage of original bands, and new ones seem to start almost every week. Since this is LEO’s Future Issue, we decided to highlight four young bands that we think you should be paying attention to.

Nashville is over-saturated with country bands, but, oddly, 178 miles north in Louisville, there’s only a handful at best. With the influence of recent breakout country stars from Kentucky like Chris Stapleton, Sturgill Simpson and Tyler Childers, Cowboy Kevin & The Kush Bandits may be the next strain of young American country from our slightly-Southern state. Temporarily trading in their tie-dye and overalls for fringed suede jackets and cowboy hats, the three-piece psychedelic band Boa, with the support of three other Louisville musicians, have formed Cowboy Kevin as “a way for us to explore another genre and have fun in general, just writing and playing country tunes,” says singer/guitarist Gaven Hopkins. “We’re going to keep playing, mainly as an in-town kind of thing for when we can’t play Boa shows.” Gaven steps away as the drummer of Boa to sing with mild effort and a dash of twang in Cowboy Kevin. “My friend Ben [Faulkner] got me into country music, but Sam [Filiatreau of Lazy Sunday] inspired me to write country music because he’s a great country music writer.” The Kush Bandits (Logan Hopkins, Shane Spader, Maggie Halfman, Ben Faulkner, Sam Filiatreau) generate an expansive, easy-going sound with instruments outnumbering actual players. Logan and Shane swap between drums, guitar and mandolin, and Sam hastily switches from the six string to the pedal steel guitar not to mention the front two acoustic guitars flanked by a bass. Take a puff on this stuff.—Julie Gross

Over the last year, TrapKingKai has become an increasing presence in Louisville hip-hop, guesting on tracks from Dom B, Peter Wesley and Dillon McCluskey, just to name a few. As a solo artist, his work has a gritty, old-school vibe that recalls the glory days of the Wu-Tang Clan. His music is both grimy and relatable, leaning into escapism, a fairly ubiquitous part of early adulthood. Last month, Trap released Blax Jim Halpert, which uses references to “The Office” to reflect the emcee’s perspectives on life. “No one is really in the club everyday, stunting every day. I’m just an average Joe. I go through day-to-day problems and issues,” said Trap. “I went with ‘The Office,’ because it felt like average people.” At 25, Trap feels like he needs to capture his opportunities. His EP just dropped in late November, and he also has two more shows booked before the end of the year, one on December 22 at Kaiju as part of a Kr8vn8vs Records showcase, and another on December 27 at OPEN Community Arts Center. He has a full length, Kai Hendrixx, scheduled to drop in February, and aspirations for a tour in the spring or early summer. “Whatever I can do, I’m doing it,” said Trap. “As long as I’m doing music, it’s cool to me.”—Syd Bishop

Last year, The Ego Trippers silently released one of the best albums in Louisville. It features only seven songs but is the perfect introduction to a local band worth knowing. My recommended entry point would be the track “Holiday (I Can’t Take It),” a contemplative and angsty, but controlled, rock and roll gem. It’s the perfect autopsy to figure out what The Ego Tripper’s are all about: they’re patient and emotional, twisting the listener through the various shifting phases of the song. “It’s really about a lot of different feelings. I wrote it when I was a senior in high school, so I was in a transitionary period in my life where everybody around me was going separate ways, and I felt really lost,” singer Zac Anderson said. It’s refreshing to hear a new band exist in an old sound (the ‘90s for The Ego Trippers), but at the same time deliver music that is uniquely their own. After graduating high school, the three-piece began working on new material in dark and humid storage units downtown over the course of the last two years, playing whatever gigs they could get their hands on. The hard work is paying off, judging by their last live show, where they ripped through their songs in a blistering pace that had the audience hanging on every moment of the set. They’re slowly establishing themselves as one of the must-see live bands in Louisville. In 2019, the band plans on playing more shows, doing a small regional tour and possibly recording a new release.—Zach Hart

Zerg Rush’s ability to pack classic punk, surf rock and new wave into a magnetic and fresh style is impressive by itself, but that they do it with so much energy and versatility is what sets them apart. Mothership Transmissions, Zerg Rush’s recently-released EP, bounces from oddball anthems about soda (“Big Red”) to New York Dolls-style rebellion (“High Stepper”), creating something that’s visceral and the right kind of chaotic, but also thoughtful, with a lot of range. Zonny Mondo’s vocals can steer with a well-timed, choppy punk cadence; or explode into primal screams; or find an ear-catching melody, which unlocks a lot of different directions for the band. The guitar work intensely slices through the songs, while the rhythm section is the foundation and the glue. Mothership Transmissions is Zerg Rush’s first release, and they somewhat consider it a demo. It was mostly written during the winter of 2017, although a few of the songs were holdovers, penned a few years back. “We were all so fueled with creative passion that had no outlet, because it was everybody’s first band, practically,” Mondo said. While they aimed to create music that was “campy and fun,” Zerg Rush walks the line between carefree, party punk and something more nuanced and biting. They are currently working on getting more out-of-town shows, and hope to land on a label and get into a studio in 2019.
—Scott Recker •