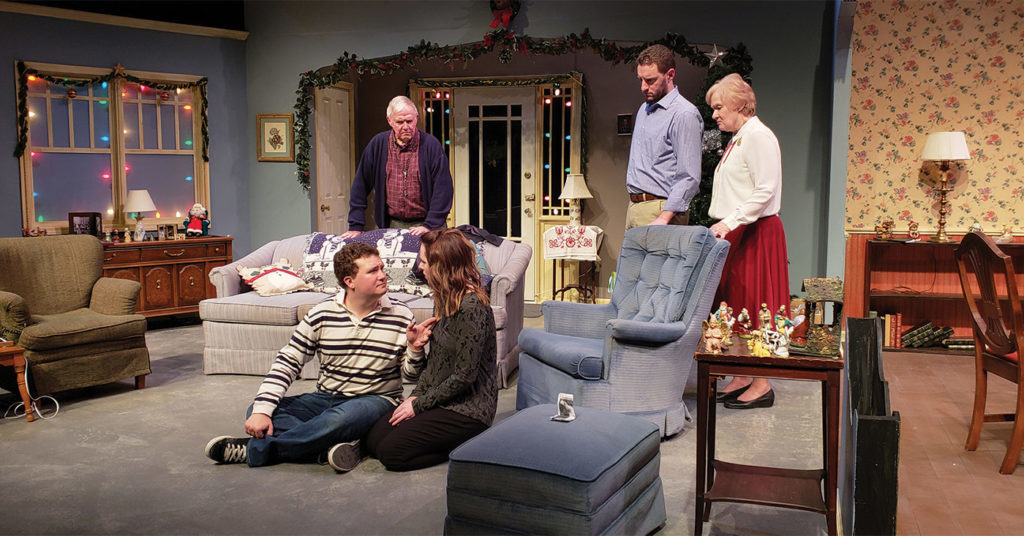 The holidays are a time to get together with the family you don’t have a chance to see throughout the year. This can be comforting and sweet for some, but for many of us, it comes with its own special brand of stress headache. That’s certainly true for Andy Gorski in “Greetings!” at Bunbury Theatre, as he travels with his Jewish, atheist fiancé to visit his staunchly Catholic parents in Pittsburgh. And it takes a literal Christmas miracle to relieve that tension.

The script was written in 1990 by Tom Dudzick, and it shows — both in the reference to long-distance phone calls and the use of the intellectually-disabled younger brother as a magical learning moment for the rest of the cast. But these elements of the script, which seem behind the times to those of us in 2018, actually amplify the sense of frustration in patriarch Phil Gorski (Rich Williams), who has become a bit of a curmudgeon in his 60s, railing against the changes in his neighborhood and even in the way his son Andy (Jeremy O’Brien) has changed since moving to New York City.

And, dated though the script may be in places, the core questions remain relevant. Andy and his fiancée, adorably named Randi (Katie Graviss Bechtler) have vastly different beliefs. Andy, while not as devout as his parents, still definitely believes in God and derives comfort from that. Randi hasn’t believed in God, or in any kind of design of the universe, since the age of 11, when her sister was hit by a car and killed right in front of her. They respect each other’s views and don’t try to change each other, but, as they start to consider the idea of their lives together, they stumble on uncomfortable questions. What will they teach their kids? Is Andy truly accepting of Randi’s lack of belief? And, more immediately, will his family accept her?

With Andy’s parents, Phil and Emily (Alice Chiles), we also see the all-too-real strain that time can put on a marriage, after decades of living with each other’s quirks and lost dreams. Finishing off the cast, but really at the core of the play, is Mickey (Chase Gregory), a loving, intellectually-disabled man who has never spoken beyond “Wow!” and “OK!” in 30 years, but who has recently begun to act strangely. As it turns out, Mickey has been inhabited by a spirit that he requested to help his family. In one of the most interesting moments with this spirit, he reveals that he’s known all of these characters for hundreds of lifetimes and that they helped him to “graduate” from his long cycles of human existence, so now he plans to return the favor by serving as a family counselor of sorts for the night.

It’s a little precious in the way that many holiday stories are, but what I like about the script is that this spirit never seems to offer solid, completely satisfying answers to anyone’s questions. There’s no “do this, and all your problems will be solved,” except when he’s being particularly cheeky. The reason is that these issues — whether differences of beliefs, strained family relationships or the loss of young life — don’t have simple solutions. Instead, he encourages the family to be more understanding and supportive of each other, and they come to their best human conclusions.

“Greetings!” stays sharp with its dialogue and banter, a combination of the witty script and great, believable chemistry from the actors. Williams — a veteran of TV, movies and stage — gives Phil flustered speech quirks, tripping over words as he becomes more frustrated with his situation, but his eyes glow as he pokes fun at his wife or seems to have the upper hand in a conversation. We see his softer side with Mickey and, occasionally, a hopeful, eager side that he tries not to show to the others. Chiles’ Emily is frustrated with her husband’s curmudgeonly antics but knows him well enough to get a few good quips in when he least expects it. O’Brien plays up Andy’s long role in the family as peacekeeper and icebreaker. Bechtler’s Randi desperately tries to fit into the family dynamic with light anecdotes — like her story about her old Christmas albums despite her Jewish upbringing — but she’s not afraid to stand up for herself when challenged either by Phil or Andy.

Gregory has the task of playing two characters in the same body, very distinct from each other in the way they express themselves, but with a common motive and probably the biggest hearts in the show. He often has to switch between playing Mickey and playing the spirit inhabiting Mickey several times per scene, and he pulls it off so seamlessly that sometimes, even before he speaks, while the attention is still on the others of the Gorski family, you can see the change.

The script of “Greetings!” tackles a topic not being covered in many holiday plays this season: that the Christian concept of Christmas doesn’t have a monopoly on the holiday season. But it’s the Bunbury cast — along with director J. Barrett Cooper and Bob Bush’s cozy, intricate design of the Gorski home — that really makes this production a must-see.