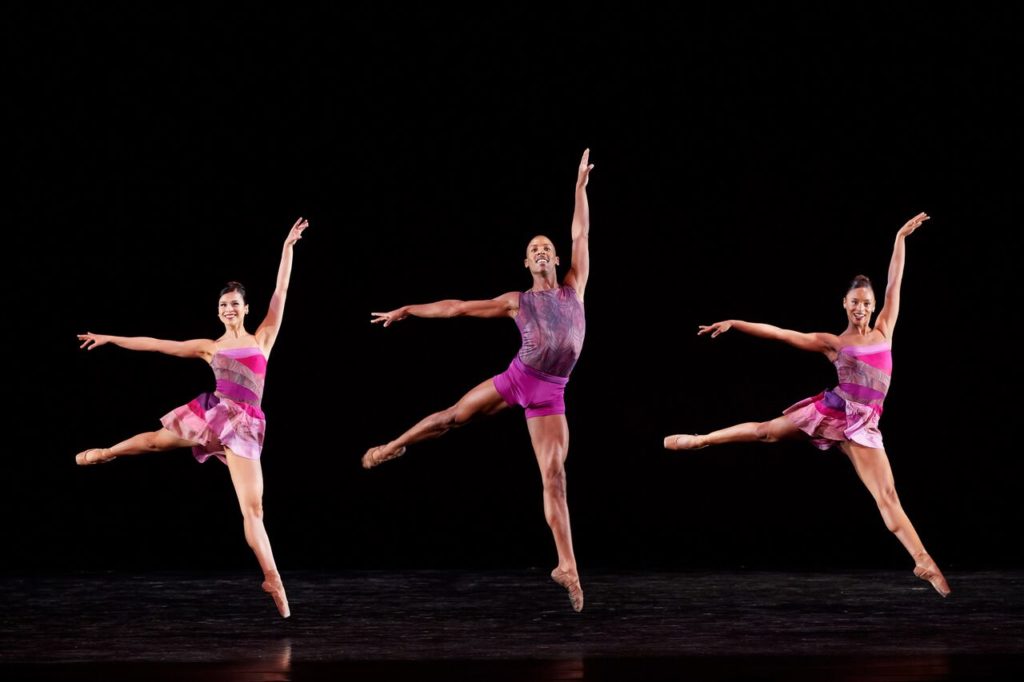 Weeks before any dancers from Dance Theatre of Harlem stepped foot in Louisville, a few young journalists began learning about its history and the history of African Americans in ballet — including dancers and teachers here in Louisville.

From late October until even the day after the company’s Friday performance at The Kentucky Center for the Performing Arts, Maddie Hayden and Faith Lindsay participated in a workshop run by Arts Bureau Edge, a new youth arts journalism program.

Besides talking with local African-American dancers and teachers, they interviewed a member of Dance Theatre of Harlem (DTH) and attended the company’s rehearsal and the performance.

Lindsay even took photos and wrote about a special masterclass led by DTH artistic director Virginia Johnson the morning after the performance. Here are the results of all their hard work. —Elizabeth Kramer

Special thanks goes to The Kentucky Center and Dance Theatre of Harlem.

Much gratitude goes to Keith Stone and Scott Recker of LEO.

Dance Theatre of Harlem ballerina Alicia Mae Holloway had a nagging feeling her world of ballet lacked diversity when she was a child.

“Growing up in West Virginia, there was one other black girl that went to my studio, and I was at two studios at the time,” she said.

The picture was different last Friday when Holloway was onstage with Dance Theatre of Harlem (DTH) at The Kentucky Center for the Arts.

The company, founded by Arthur Mitchell and Karel Shook in 1969 after the assassination of Martin Luther King Jr., has among its goals “to present a ballet company African-American and other racially diverse artists who perform the most demanding repertory at the highest level of quality.” These classically-trained ballet dancers, including Holloway, also come from various different backgrounds.

Holloway began taking classes at Morgantown Dance Studio in 2007, and then went on to training at University of North Carolina School of the Arts before attending the School of American Ballet. These programs helped Holloway develop her dance skills and provided vital training to help her get where she is today.

“I never got the opportunity to see a person of color perform that I could really look up too,” Holloway recalled.

The goal: Getting black dancers onstage

As journalist Zita Allen wrote in her essay for the exhibit “Arthur Mitchell: Harlem’s Ballet Trailblazer” presented by The Miriam and Ira D. Wallach Art Gallery and Columbia University’s Rare Book and Manuscript Library, the DTH founder tells us, “There were always black classical dancers in America- they just never got on stage.”

African-American ballet dancers had the choice to perform either in smaller, all-black companies, or be guests with ones that had all-white dancers. Those who managed to overcome these barriers made a big impact in the ballet world.

Allen’s essay also quotes a 1977 survey by a New York Times writer that found only 23 black dancers were members of 495 companies throughout the U.S. The limited diversity in ballet is smaller in present day, but Dance Theatre of Harlem keeps trying to end that gap once and for all.

Putting DTH and black dancers on The Kentucky Center stage

When DTH visited Louisville in early November, it traveled across the city bringing inspiration to those young students of color and others. It traveled to the Youth Performing Arts School and Lincoln Elementary, among other places. The company performed for an audience of school children the same Friday of its Nov. 9 evening performance at The Kentucky Center.

The evening of the company’s packed show, which attracted everyone from ballet fans to aspiring ballerinas. One audience member was 9-year-old Marissa Paige, a young African-American girl.

“When I grow up I want to be a dancer, a singer, a ballerina, and an actress,” she said after she first saw the company perform.

No doubt, the dancers who looked like her helped her understand that she could achieve those dreams. The pieces illustrated that ballet is not just all caucasian girls in tiaras and tutus.

The evening’s performance of “Harlem On My Mind” by Darrell Grand Moultrie includes parts with several pairs of dancers. They have different skin colors and skin types (including Holloway) and are accompanied by uplifting, jazz-like music that is not like traditional ballet music. The movement of the dancers is awe-inspiring. The way the men lift the women high in the air and spin them around and around and around, it’s a wonder they don’t get dizzy.

In “Harlem On My Mind” and other pieces, minority dancers often express their true self in ways many ballet companies might not allow. They wear their hair in its natural form, and choreographers’ works illustrate struggles that can make an emotional connection with the audience.

The struggle of getting to stage starts in the dance studio

Struggle is a topic many African-American dancers from Louisville talked about facing when trying to make it in the dance world and how DTH as well as special teachers inspired them to help them and other dancers realize their potential.

“Maybe you should look into contemporary a little bit more,” he said some instructors there told him.

When some pushed him away from ballet as a career path, he came back 10 times more dedicated to prove them wrong. With support from his first dance teacher, who was African-American, he realized that he could make it in the dance world.

“She made sure to encourage me, and said ‘If this is something you want to do you can do it,’” Ragland said.

Ragland realizes many children of color don’t have someone like his teacher to look up to.

He added that money is often a barrier to their learning. Most ballet dancers start training from a very young age and continue until they go professional. A Time magazine article from August 2015 discussed how raising a classical ballet dancer could cost around $100,000 for over 13 years.

“The expense is a barrier and ballets got this elitism attached to it, which is really unfortunate, because I think it keeps a lot of young dancers out of the genre,” explained Louisville’s Portia White.

White has worked in arts education for more than 30 years, including roles as a dance instructor and administrator with The Kentucky Center, Louisville Ballet and Louisville Metro Parks.

Harlina Trumbo, artistic director of La’Nita Rocknettes School of Dance and a teacher at Lincoln Elementary, reflected on growing up as a young African-American ballet dancer in Louisville, and remembers the prejudice she and others faced because of skin color and body type.

She talked about how, in the 1970s and ‘80s, some students from  La’Nita Rocknettes School of Dancers were not accepted into the Youth Performing Arts School because their “booty and chest was too big to be on pointe.” These struggles propelled her to continue to teach at the dance school.

Since the 1970’s things have changed at the Youth Performing Arts School, Last week, YPAS hosted DTH when its dancers came to teach a class of dance majors. The visit is a crucial part of the companies mission to provide arts education to young students all over the U.S. In some ways, it is an extension of the world-class dance school in Harlem.

Young dancers get masterclass on believing in yourself, working towards goals

After a watching a glorious night of ballet performed by the Dance Theatre of Harlem (DTH) on Friday, Nov. 9 at The Kentucky Center for the Performing Arts, 23 middle and high school girls woke up early the next morning to take part in a masterclass led by Virginia Johnson, the company’s artistic director.

In a large room at Louisville Ballet’s Main Street studios that morning was a sea of black leotards and tight ballerina buns — many worn by students from La’Nita Rocknettes School of Dance, Kentucky Center’s ArtsReach[cq] Our Voice Dance Collective and Louisville Ballet School.

Among them was Brown School eighth-grader Malaysia Green, a student of La’Nita Rocknettes School of Dance, who wore a red- white-and-blue windbreaker and dyed-bright green crown of coils atop her head. She stood with her shoulders back and head held high. She commanded attention.

At the end of the class, Johnson took questions. She was a member of the company from its founding by Author Mitchell and Karel Shook in 1969 after Martin Luther King was murdered. She danced with the company until 1997 before returning in in 2009 as its artistic director.

When Malaysia was given the chance to question Johnson, her question belied the conviction she seemed to emanate.

“What advice would you give to a ballet student who’s really doubting herself?” she asked Johnson.

Johnson told the young girl that it was all a game of the mind.

Before Johnson’s 28-year reign as a dancer in the company, she was, as she described herself, an uncoordinated mess. But, she added her love for the art transcended those challenges and led to her performing for Presidents Jimmy Carter and Ronald Reagan, being one of the first ballerinas to perform in the Union of Soviet Socialist Republics (USSR), and having a lead role in the “Creole Giselle,” which was a groundbreaking piece of work staged from the European “Giselle” in 1984.

Even though Johnson was a founding member, she explained how she once felt she didn’t belong.

Malaysia, a plus-size black dancer, said later in an interview that she feels like she continuously is trying to prove her worth.

Institutions such as DTH were created for people like her. The company and and its school in Harlem were made to be accepting of black students in a world that wasn’t so accepting of them, because their bodies, skin and hair didn’t exactly fit the white mold.

La’Nita Rocknettes School of Dance’s Artistic Director Harlina Trumbo recalled hearing dancers at her school in the past “being told that your physique is not conducive to standing on your toes.” For some black ballerinas over the past century, their existence seemed to be against many things the traditional art form stood for.

Meanwhile, over the past 50 years studios in cities throughout the country, such as La’Nita Rocknettes School of Dance, helped cultivate professional ballet dancers including Gregory Jackson, who grew up in the Park Hill neighborhood and danced with DTH. In recent decades, Louisville has seen other programs including Kentucky Center’s ArtsReach and Genesis Dance welcome young people of color.

At the national level, DTH has given dancers who have spoken about comments they received about their bodies a launching pad to the world stage, such as Michaela DePrince. She joined the company at t 17. A year later, the Dutch National Ballet hired her. All of this from a young lady born in the war torn country of Sierra Leone with vitiligo, a skin disease that causes patches of color loss, and who became an orphan as a toddler.

Exposing children of color to the dance and the arts is not only able to alter the trajectory of their life, but allows them to define their own worth in the skin their in.

DTH co-founder Mitchell used to make a parallel with singers by asking, said Johnson, “Can you hit the high C?”

If you can, the message is don’t let anything stop you for reaching for what is already yours.