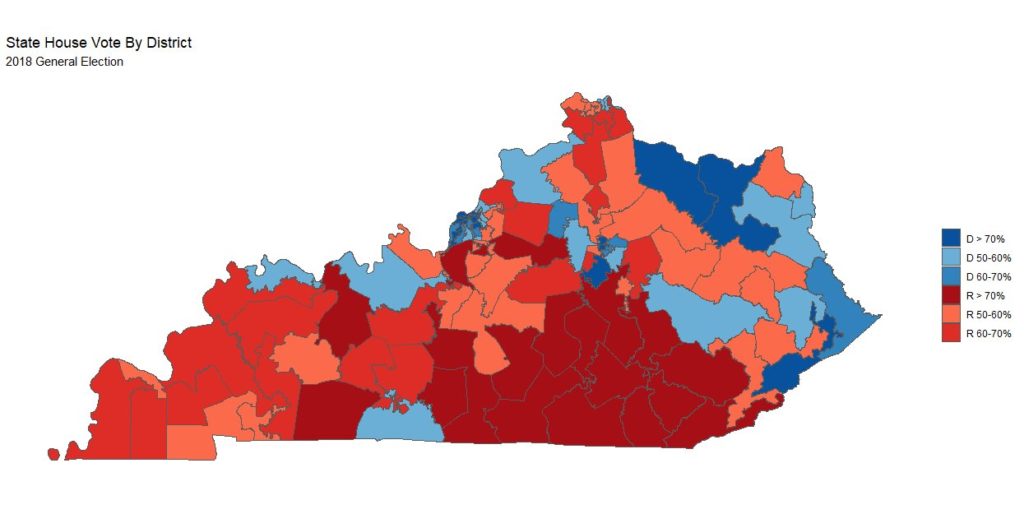 With all the recount madness going on in Florida and Georgia, we can be thankful that Kentucky’s results are in, and able to be analyzed.

So, let’s take score: We’ve still got a Republican supermajority in the Kentucky House, but that doesn’t mean women and teachers didn’t make gains, and we all know that Jefferson County is basically its own territory.

Experts and lawmakers weighed in on what the wins and losses mean for the Commonwealth.

Despite rumblings that Kentucky Democrats would take more seats in the House, the Republicans maintained supermajorities in both chambers — allowing the party of President Trump to maintain its outsized influence in the state.

But does the success of Republicans mean more “yuge” change is in store for the state in the upcoming legislative session?

Not really, said one state political observer. During the 2016 legislative session and the one that followed, Republicans and Gov. Matt Bevin quickly passed laws that they had been hoarding for years, including right to work legislation, a prevailing wage repeal for state-funded projects and abortion bills. By comparison, the coming session is expected to be sleepy, said Al Cross, director of UK’s Institute for Rural Journalism and Community Issues and former political writer for the Courier Journal.

“People have been worn out from last year with this extraordinary session that they had and the extraordinary election season,” he said. “My guess is there would be a lot of sentiment to take it easy.”

Not only that, but it’s a shorter session, Cross noted, and party members might want to avoid tackling controversial issues, such as the pension fund, until the filing deadline for 2020 elections are over (although, he said, some Republicans are interested in addressing pensions next year).

Only two seats were regained by Democrats in the House last Tuesday, while Republicans nabbed an extra seat in the Senate.

With a supermajority, meaning Republicans hold 60 or more seats in the House and 23 or more in the Senate, the party can fiddle with the budget or pass constitutional amendments over Democratic objection. The party previously toyed with lengthening term limits for the next Kentucky governor to five years, but Cross thinks the GOP might hold off until after the governor’s race in 2019.

That’s not to say the Republicans have no plans for legislation, according to Cross. Look for bills to legalize of sports betting, bring in more money for Medicaid by expanding the state’s provider tax beyond hospitals and enact more tax reform (with an emphasis on consumption taxes, such as sales tax).

Kentucky Democrats had a lackluster showing last week, but 31 women, the most ever, as well as 14 educators, will serve next year.

In the most recent session, 19 women served in the state House and four in the Senate, putting the state in 42nd for the number of women in the legislature, according to Rutgers University’s Center for American Women and Politics.

Eight more women Democrats, seven of them Emerge graduates, were elected to the legislature last week, including the state’s first Indian-American representative. The number of Republican women in the House stayed the same at nine. Four women will continue to serve in the Senate.

“Women were finding their voice,” Moore said, adding that Emerge has trained almost 200 women since starting in 2009.

Even though a record number of women won, many more ran and lost. Fifty-seven were up for election on Nov. 6. The same with educators, inspired to run because of the pension fiasco. Fourteen won, according to the Courier Journal, but 51 ran.

Still, Moore and Brent McKim, president of the Jefferson County Teachers Association, said the candidates who did win can make a difference.

Moore thinks women are more likely than are men to find solutions and compromise when negotiating, potentially resulting in greater bipartisanship and — hopefully — fewer instances of one party being shut out. There are academic studies, too, that show issues such as women’s health and family leave get brought up more often when women are in office.

While there may not be enough support in the legislature for educators to get their own bills passed, McKim said he believes that teachers could influence their peers by explaining to them the practical impacts of their education legislation, including pension-related bills. They could “make it real for their colleagues,” he said.

That may come to pass, although Council President David James doesn’t think it will. Instead, he said, the increased Democratic strength will help push the mayor’s agenda forward.

When the new council is seated in 2019, 19 Democrats and seven Republicans will serve. Currently, 17 Democrats hold seats. Former mayoral candidate Angela Leet, a Republican, gave up her council seat to run against Fischer, only to be replaced on the council by a Democrat. And Democrat Markus Winkler will take Republican District 17 Councilman Glen Stuckel’s seat.

Eighteen votes are needed to override mayoral vetoes. James said he recalls only one instance in the past nine years when the council would have wanted to wield that advantage: When the Democrats wanted a larger minimum wage increase than did Fischer. That is irrelevant now, because the courts ruled Louisville doesn’t have the authority to set its own minimum wage.

James said he and Fischer plan to meet within the next two weeks to discuss priorities. James declined to reveal those of council Democrats.

The new council will be significant in other ways besides party affiliation: There are nine new members, which James said is the largest freshman class since Louisville’s local government was consolidated in 2002.

James views one of those as a positive — more new members mean more fresh ideas. But he’s concerned about being the only black man on the council. He’s not sure, yet, though, if the new makeup will impact the city.

“History will tell us that story,” he said. •