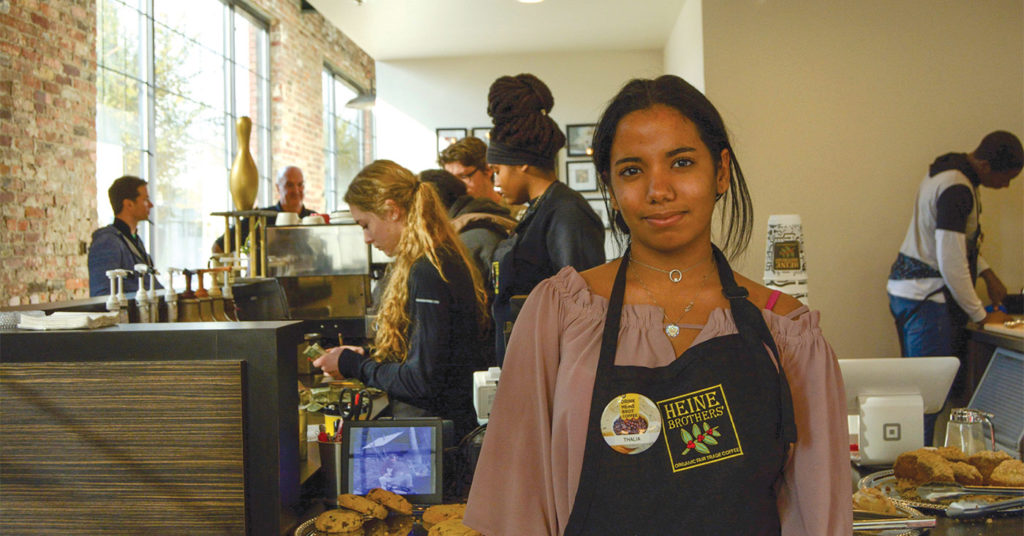 Nov. 16, 2018
Thalia, from Western High School
“In this program, our school chose a handful of people for barista training with Heine Brothers’. In the beginning, we learned the basics about different types of coffee and where it came from. There’s actually a lot of different ways to wash coffee, which I was surprised about. It really does affect the flavor. We tried coffee with different wash types, and I loved it. Over time, we learned how to make the coffee and other drinks. I struggled at first, but, after awhile, I calmed down and eventually got the hang of it all. It took some getting used to, but it got so much easier.

Not only did I learn a lot about coffee, but I learned a lot about teamwork. This program has definitely improved my skills, especially when working with teams. When working with my team, everything just flowed. It was so much fun working with them. I’m not shy, but I would usually get frustrated when it comes to working in groups, but I really learned how to work better with others. What used to be stressful became calming and a good experience. Being apart of the program has certainly improved how I interact with others. I’m sure that’s going to be a great skill to have in the future, which I really appreciate. I enjoyed it a lot.

I want to get a job at one of the Heine Brothers’ coffee shops because I love the way the company interacts with people. They want to make everybody feel welcomed and less stressed. I love how lively it gets, too. I want to work in a place like this because the positive attitude is just contagious.”

Nov. 20, 2018
Tyrell, from California
“Going to jail and going through the criminal justice system changed my life. How unfair it was definitely made me look at how I needed to change my life, so that I would never go through this system again. I want to make it so that the people in my family will never have to experience this. I want to be a better example for young men and my future sons. What I went through was a really bad experience.

I was 18 years old, and I was arrested for assault on a police officer. I was in Walmart with my younger brother, and he had picked up an open box of Pop-Its, and when we walked outside of the store, one of the security guards grabbed my brother, and he didn’t announce himself as a police officer. You know, naturally, when someone grabs your family like that, you defend your family. The charges were eventually dropped, but I ended up getting theft by unlawful taking. The fact that I was still charged with assault on a police officer — even though I didn’t assault a police officer, and he didn’t announce himself as such — really changed my perspective on law and justice.

Now, my mission is to better the community. I want to teach these young black men, in what they try to label as the ghetto, the better way. I want to tell them my testimony and show them a better way to live. There is a better way to live instead of selling drugs and gangbanging. It’s not cool, because, at the end of the day, you’ll get caught up in the system. They want you to get caught up. The system was built for black men and for us to destroy ourselves. So, if we are in our communities encouraging our kids to sell drugs and join these gangs, we’re encouraging them to go to prison and be slaves for the rest of their lives. That’s pretty much what’s going on in America.

My advice to the world?

Man, love all people and go back to the ways of God. We’re losing God’s principles, so if we get back to that, we’ll be good. No man above the next man. As long as we do that, our country will thrive, but if not, we’ll continue to fail.” •

West of Ninth began as a Louisville photography blog, westofninth.com, by two Russell residents, Walt and Shae Smith. With a love for their community, Walt and Shae see the value and potential of all nine neighborhoods that make West Louisville. Using a Nikon DSLR, a recorder and their ability to never meet a stranger, their goal is to shed light on the attributes that make “West of Ninth the greatest.”