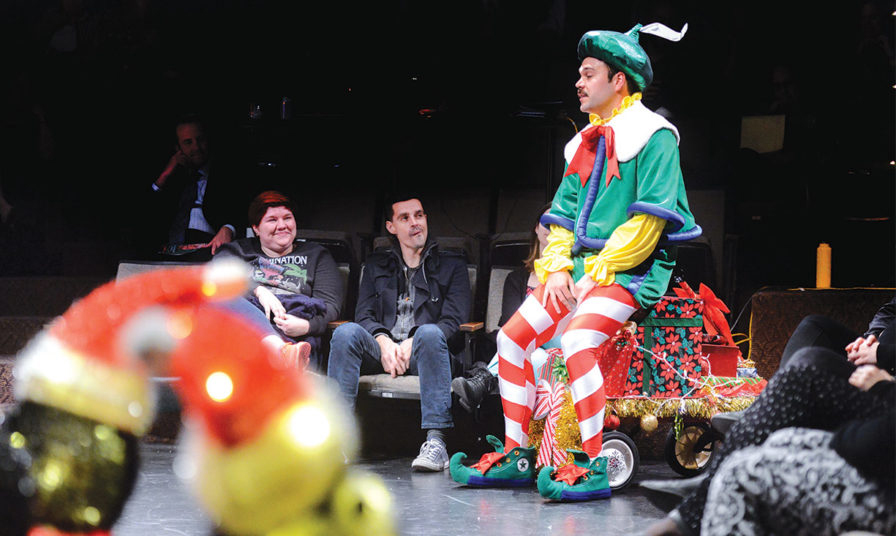 Bear Brummel in 'The Santaland Diaries' (Photo by Andrew McCawley)

With over four decades, Fifth Third Bank’s “A Christmas Carol” is easily the longest running annual show that Actors Theatre puts on. Every year as the holidays approach, posters go up showing a changed, smiling Scrooge with a beaming Tiny Tim on his shoulders, encouraging those in need of a heartwarming Christmas story to order their tickets. This might be a massive spoiler, if not for the fact that the original Charles Dickens novella is perhaps the most lauded Christmas story out there.

And for good reason.

The show has the market cornered when it comes to appealing to a mass audience.

For years, the role of the “tightfisted, solitary as an oyster” protagonist, Ebenezer Scrooge, was played by William McNulty — so long, in fact, that it seemed hard to imagine anyone else in the role. This year, John G. Preston takes the role, adding bits of humor (albeit often cruel in the beginning) to the curmudgeon who seems all his own. He appears to understand, and play on, the fact that Scrooge has deeply repressed, genuine feeling over decades. It peeks through in scenes from his past and is perfectly portrayed toward the end of the play when Scrooge attempts, awkwardly, haltingly, but joyfully to laugh for the first time in decades.

Lauren Hirte’s Ghost of Christmas Past had the Cirque du Soleil-esque design that has become popular in recent productions of “A Christmas Carol,” balancing above the stage held by two long cloths for a more ethereal presence. But it’s her playfulness that makes her stand out as my favorite Christmas Past yet. This is not a stately ghost with calm, knowing smiles who reminds Scrooge that the shadows of the past cannot see or hear them. Instead, she dances with those shadows, rearranging them for the fun of it and openly teasing Scrooge both in the past and present.

A couple of smart double castings also caught the eye. Robert Ramirez played both the gregarious Fezziwig, someone who once embodied the spirit of Christmas to a young Scrooge (Brett Schultz) and the Ghost of Christmas Present. Lexi Rabadi played both Scrooge’s lost love, Belle and the wife of his nephew Fred (Peter Hargrave), a picture of the kind of happy marriage Scrooge could have had.

Classic and schmaltzy it may be, but you can’t help but feel the relevance of “A Christmas Carol” today, especially when faced with Scrooge’s callous attitude toward the homeless, or Christmas Present’s warning against “man’s children,” Ignorance (Jacob Bukowski, who ironically also plays the picture of goodness in Tiny Tim) and Want (Cadence Diggs). “Beware them both… but most of all beware this boy, for on his brow I see that written which is Doom.” Well, he’s not wrong, but there’s something comforting about seeing that, at least in theater, hardened misers can change.

The best moments in the show are when the stage is full. The parties at Fezziwig’s shine: the bold singing and playful acting from Taylor Abels as Mrs. Fezziwig, the beautifully choreographed dance scenes (thanks to movement director Cheryl Turski and music director Tim Murner) and the general sense of camaraderie. Many of the scenes in the street, as the narrator (Sherman Fracher) weaves us through the many people whom Scrooge encounters, have a similar pleasant sort of bustle. It makes sense that the best moments are full of all kinds of characters: This is a story, ultimately, about connecting with the people around you.•

Although both shows are about Christmas, “The Santaland Diaries” — originally a set of essays by David Sedaris about his time as an elf at Macy’s Santaland — couldn’t be further from “A Christmas Carol.” “A Christmas Carol’s” strength is in its ensemble. “The Santaland Diaries” is a one-man show. “A Christmas Carol” is meant to fill you with love for fellow man and “Christmas spirit.” “Santaland” is merciless in poking fun at the commercialistic traditions of Christmas… and the trials of working in retail. It’s a newer show for Actors Theatre, but a perfect complement to the timeless Christmas story that “Santaland’s” protagonist, Crumpet the Elf, would probably despise.

The stage starts out mostly blank as Sedaris’ self-insert, soon to be Crumpet the Elf (Bear Brummel), tells us about his troublemaking ends meet as a newcomer to New York City and how he applied for the job of “elf” at Macy’s Santaland, mostly as a joke. As he explores his new job and finds new things to mock about it, effects are added to the scene: a string of Christmas lights, a sled of stuffed Christmas penguins and, finally, Santaland itself. Even the walls of the stage function like an advent calendar, full of pockets that, when open, bring us further behind the scenes of the less glamorous life of Santaland.

Crumpet is a cynic and a near misanthrope, understandably given the bizarre stories of customer and employer demands that he shares. But Brummel’s gift is his way of engaging with the audience. At one point, when a woman laughed before the punch line, he paused and pointed to her as if to say, “You get it.” It happened again when I found myself mouthing “Oh, no” at one of his more embarrassing anecdotes. He looked right at me and said, “Oh, yes” before he continued. He made as much of the audience as he did the set and the costuming. Between Sedaris’ sharp, irreverent writing and Brummel’s familiar and captivating portrayal, this show is a wholly satisfying and cathartic laugh for those who find that typical Christmas cheer a little too much.

Or anyone who’s lived through retail hell. •