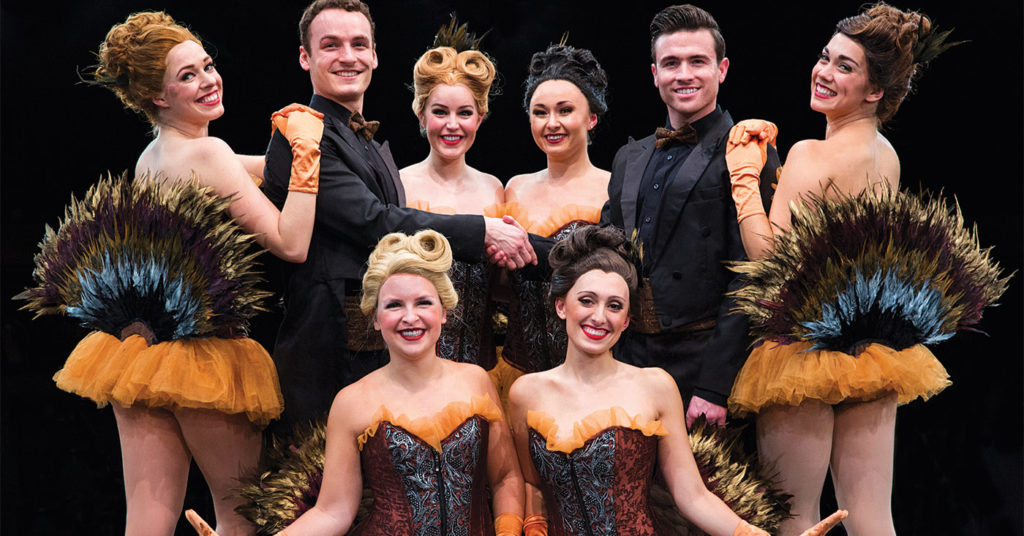 “It’s a Wonderful Life” is the kind of Christmas movie that everybody knows. It transcends generations. For some, it’s a holiday favorite. For others, it’s the movie that you sit through long-sufferingly for the sake of someone in your family. Maybe you’ve never seen it all the way through, but you’d recognize Jimmy Stewart and Donna Reed singing “Buffalo Gals,” or George’s bold declaration to “lasso the moon.”

The point is, we all know more or less what “It’s a Wonderful Life” is. And with its over-two-hour run and a cast of 36 characters, it doesn’t seem built for a one-man show. But playwright Steve Murray must have felt up for the challenge, and now Louisville’s Doug Schutte, owner of The Bard’s Town, enthusiastically steps up to that same challenge by directing, producing, designing and acting out his production of “This Wonderful Life.”

The show actually starts by playing with your expectations of a one-man show. Schutte runs through all the famous lines at whirlwind speed in a whiplash of character voices, then quickly waves to the audience and exits the stage. He appears a moment later, and the real show begins, which is really more like a highly-energetic, charismatic friend telling you about their favorite movie.

He talks about all the things he loves about “It’s a Wonderful Life.” He urges the audience to call back with “Hee-haw!” whenever the character of Sam Wainwright comes up, and the callback grows in enthusiasm as the night goes on. His Jimmy Stewart impression is an expected delight, but his Lionel Barrymore impression as evil land baron Mr. Potter shines, as well. He seems to get the most fun out of the role of bumbling guardian angel Clarence.

He also takes time to point out the more ridiculous elements of the 1946 movie. He describes Bedford Falls as a town with “four churches and one black person, but apparently a swimming pool under the gym.” As he discusses the moment in which young George Bailey’s boss, Mr. Gower, mixes up a child’s prescription with a bottle marked “poison,” he wryly adds, “The kind of bottle you always expect to see in a pharmacy.” He laughs at the way the story portrays the idea of Mary as a spinster with such gloom and doom, as well as Hollywood’s attempt to make Donna Reed look dowdy and unattractive.

But all of these points are made in good fun and with genuine love for the Christmas classic. I’ll admit, I went into this show not particularly a fan of “It’s a Wonderful Life.” Schutte’s description of George Bailey, despite all the narrative throws at him and how it rings true today, makes me want to give the movie another chance. “It’s not about Christmas,” he explains as he describes George standing on the bridge that fateful Christmas Eve. “It’s about all the other days of the year, even the bad ones and all the rough things we go through, trying to get to the next good day.” •

Thursday night, the first snow of the season heralded the opening of Derby Dinner Playhouse’s production of Irving Berlin’s “Holiday Inn.” It was the perfect night for the kind of cozy, familiar Christmas show — not too deep, but full of lovable characters and delightful song and dance. It was even more apropos when you consider that it was for the 1942 “Holiday Inn” that the song “White Christmas” was first written (as opposed to the 1954 movie “White Christmas,” with slightly different characters but much the same plot). And Derby Dinner Playhouse, a familiar standard itself for almost 45 years, is the perfect home for it.

A charming lead cast is called for in this play, and the Derby Dinner cast delivered. Jim is immediately introduced as the singer of the bunch (which only makes sense, given the part was written for Bing Crosby), and David Borum has a sweet, steady voice to match, as well as an optimistic and occasionally naive sort of charm. Gino Bloomberg takes the Fred Astaire role of Ted Hanover with the right steps and swagger. Sarah Bomber’s Lila Dixon, confident and ambitious, is meant to be the “bad girl” and gets the least flattering ending, but you have to admire her knowing what she wants and prioritizing her career. Kaitlyn Sage as schoolteacher and ingénue Linda Mason brings both sincerity and spot-on comedic timing.

But it’s not just the leads who deserve a shout-out. In fact, two of the best performances came from characters who weren’t in the 1942 movie at all, but were later additions to the musical. Mandi Elkins Hutchins commanded her scenes as Louise, a sensible, butch farmhand who helps Jim run the farm, the house and his romantic relationships. She’s more than a bit of a meddler, with generally good intentions and occasionally awkward execution. Third-grader Beckett Gunderson gets some of the best laughs as Charlie Winslow, a know-it-all local boy and bank employee.

A strong ensemble and Heather Paige Folsom’s choreography complete the feel-good musical effect. The musical also, fortunately, cuts some of the elements of the movie that would rightly spark some outrage today (looking at you, 1942 blackface scene). On the opening night, there were a few kinks to work out with the sound. Sage had a clear voice, but when Linda sang her first solo in the audience, she was faintly heard across the room. Occasionally, in the big numbers, the music briefly overwhelmed the ensemble. These moments were fairly minor and didn’t detract from the enjoyment of the show. If you’re after quintessential Christmas cheer, as the song says, “come to the Holiday Inn.” •