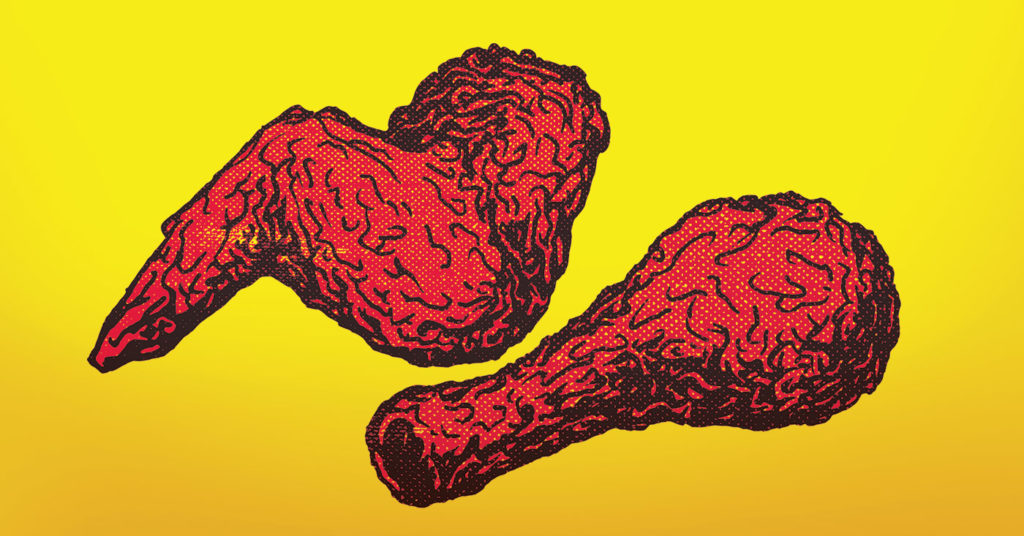 Louisville may have more pizza joints, but it was built on fried chicken and bourbon. Read about our showdown between city favorites Ind’s and Chicken King. But here is a non-exhaustive list of some of our other favorites:

The Chicken House
7180 Highway 111
Sellersburg, Indiana
(812) 246-9485
thechickenhouseonline.com
Dining at The Chicken House is like walking into your grandmother’s kitchen and having her feed you as if it is your last meal. It is a Southern standard, tucked away in an old, white, farm-style house in Southern Indiana. You will not leave hungry with these portion sizes. The highlight is the fried chicken. The chicken is cooked to order, and it is down-home cooking at its finest, with a crispy, golden outside encasing the tender and juicy meat. The flavors are simple, but a plate of fried chicken with a side of coleslaw and dumplings can be transcendent with an ice cold beer to wash it all down. Make sure to call ahead because the menu warns “THIS IS NOT A FAST FOOD PLACE. We prepare each entree to order.” —Sakya Schuler

Cottage Inn
570 Eastern Parkway
637-4325
cottageinnlouisville.com
Fried chicken, sold by the half or white or dark quarters, was very good. It is, after all, Cottage Inn’s signature dish. Toothsome and flavorful, the chicken was cooked just right within a light, crisp, flour dredge. —Robin Garr

The Eagle
1314 Bardstown Road
498-8420
eaglerestaurant.com
One of four locations in the small, regional chain, The Eagle brings a lot of different things to the table, but fried chicken is the focus. Classic Southern style, the crispy coating has a jolt of pepper, while the tender meat inside stays juicy and hot. The chicken is served with a spicy honey that is — fair warning — spicier than you might expect it to be. And when you are set to order, you’ve got plenty of options based on your appetite at the moment: You want a whole fried chicken? You got it. You can also order a half, a quarter (white, dark or mixed) or an eight-piece dark. There’s even a family-style dinner option; tuck your napkin in your shirt and hang on. —Kevin Gibson

Gospel Bird
207 E. Main St.
New Albany, Indiana
(812) 725-1054
orderthebird.com
Shortly before this issue went to press, Gospel Bird owner Eric Morris announced that he is closing the restaurant to spend more time with his family, particularly his ailing mother. So, we suggest you get to this standout establishment quickly, because this place is really about chicken. We sampled chicken two ways, and we found both perfectly brined, breaded and cooked, and profoundly satisfying, moist and flavorful — pan-fried in a not-too-thick, old-fashioned Southern-style buttermilk breading, laced with black pepper. The house Southern Fried Chicken offers two hefty pieces, half of a chicken, with choice of side and a flaky buttermilk biscuit. The Yardbird is a chicken sandwich featuring a sizable boneless breast on a hefty burger-style bun, piled high with crisp bacon and a slice of cheddar and a little slaw hidden in there somewhere, with house-made “Gospel sauce” — a blend of spicy fire sauce and sweet-sour honey-mustard — on the side. —Robin Garr

Irma Dee’s
1213 S. 28th St.
409-4782
Search Facebook
Our compliments to the fry chef: Fried chicken had been fried with skill, achieving a pretty, crisp, golden-brown crust with no burned spots and no remnant of grease. Three fried chicken pieces – whole wings – bore a lighter coating, a thin seasoned flour dredge. They rated as very good, but a little more crunch and flavor might have brought them closer to fried-chicken nirvana. —Robin Garr

Joella’s Hot Chicken
13401 Shelbyville Road, No. 101, 254-1111
3400 Frankfort Ave., 895-2235
joellas.com
We tried both a no-heat Southern style leg quarter and hot-spicy vegan tenders. Both deliciously hit their heat and flavor targets, with glassy-crisp crust that shatters when you bite. The Southern chick was lovably juicy and tender, with appropriate black-pepper flavor in the crust. The vegan “chickin’,” a soy-based faux-bird analogue, was surprisingly persuasive, with tender chunks of white protein ably mimicking the real thing within a glass-crisp coating that was hot enough to bring out a sweat. —Robin Garr

Kings Famous Fried Chicken
1302 Dixie Highway
776-3013
Search Online
This is a true chicken shack. No seating, but plenty of room to line up and shout your order through the glass while looking at tray upon tray of spicy and plain chicken, with simmering sides of beans, greens and more. The spicy keel special (two pieces, three wedges and a roll) offered the right balance of heat and help. The chicken was moist, and the spice level was below fire extinguisher, which, for some, but not me, is not enough. However, points are given for the coating, a crispy, perfectly salted layer that was delicious enough to leave you picking the bits out of the box after. My dining companion’s green beans had an authentic, meaty flavor, and the wedges were delicious — the same breading over piping hot-fried potatoes with skins intact. —Keith Stone

Louie’s Hot Chicken and Barbecue
4222 Poplar Level Road
709-4274
Search Facebook
At Louie’s, which opened this year, the focus is, rightfully, on the food. Their “dining room” consists of two window-side bars with chairs, and your order is served in a to-go box no matter how you ask for it, at least as far as I can tell. But when you pop open that Styrofoam container, you’ll be transported to a poultry paradise. You can order your chicken in practically any way that suits your fancy: white meat, dark meat, mixed meat — as tenders or wings, with the bone, in a sandwich. Heat options range from none to extra hot, which can be tempered by choosing from one of Louie’s seven sauces (including “red,” “yellow” and “white” flavors). Your order is piled on a slice of bread, and served with two, classically Southern sides (some of the best potato salad I’ve had in Louisville, by the way). You can even buy a  whole bird, which comes with an extra side, because — obviously —you’re hungry. —Danielle Grady

Mellwood Tavern
1801 Brownsboro Road
290-3377
mellwoodtavern.com
Sometimes Crowder doesn’t sell out on a Tuesday night, and on those increasingly-rare occasions, you can stop in on Wednesday for a $2 piece of “ice box chicken” — your choice of pieces, just $2 apiece. And if you come in late on a Tuesday (Mellwood is open until 4 a.m.), you’ll get first dibs on chicken-by-the-piece. This brings me to a strategy I learned from a fellow Mellwood chicken-phile: You can up your order to four pieces of chicken (even all-white) and two sides. During my last visit, Butch and I each ordered the four-piece dinner, and each took a few pieces home for future snacking. Ice box chicken is one of the greatest things ever, and I’ll debate anyone who dares to tell me otherwise. —Kevin Gibson

Roof Top Grill
708 Louis Coleman Jr. Drive, 785-4069
414 W. Oak St., 618-2287
Search Facebook
The long, narrow room is sparkling clean, with terra cotta walls decorated with paintings of tropical scenes. Roof Top Grill’s fried dishes were uniformly estimable. A chicken leg and thigh and three chicken wings were well cooked and juicy, with great flavors. They were lightly breaded and fried to perfection, crusty and gently spicy with black and red pepper. In two visits, we made a good start toward sampling the entire menu. Nothing disappointed us, and quite a few of the dishes made our taste buds stop and go: “Whoa!”—Robin Garr

Royals Hot Chicken
736 E. Market St.
919-7068
royalschicken.com
Hot chicken, as you’ve surely heard, has spread out from its roots in Nashville, where it’s such a big deal that the Music City even throws an annual Hot Chicken Festival every Fourth of July. Now going national, the hot chicken craze has spread to Atlanta, New York City, and Portland (of course). And to Louisville, with Joella’s and now Royals.  It takes basic Southern fried chicken and ramps up the heat via a combination of brine, dry rub and marinade, yielding a chicken with a bite. This bite, depending on how you order it, may range from a gentle gumming to a firm chomp to the culinary pit-bull mauling that is Royals’ “Gonzo,” its heat achieved via three of the world’s hottest peppers: Carolina reaper, Trinidad scorpion and Indian bhut jolokia ghost peppers. —Robin Garr

Shirley Mae’s Café
802 S. Clay St.
589-5295
shirleymaescafe.com
A landmark in Smoketown, Shirley Mae’s Café is part bar, part restaurant. If you’re smart, you’re there to eat, particularly owner Shirley Mae Beard’s famous fried chicken. Shirley Mae still works hard behind the counter, cooking on multiple stoves while her family takes the orders and assembles the home-cooked meals. On the wall behind the bar are photos of celebrities who’ve visited, including Morgan Freeman and Whoopi Goldberg. The aromas will grab you as you walk through the door, and you might be tempted by Salisbury steak or ribs, but it’s the fried chicken you need: try the big, juicy wings, fried golden brown with a nicely spiced batter. Guaranteed to warm your belly.
—Kevin Gibson