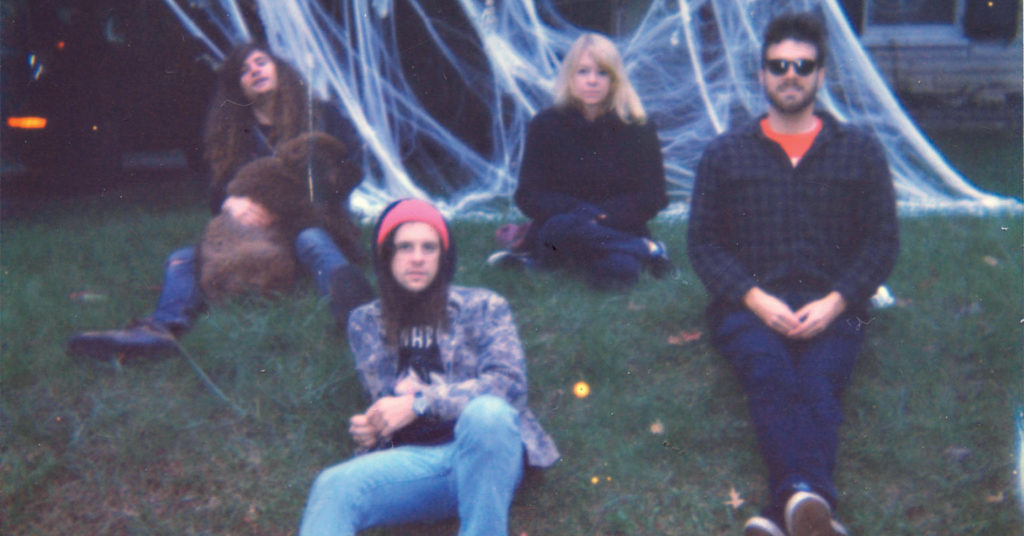 “Death Preferences,” the second song from State Champion’s recently-released record, Send Flowers, epitomizes singer-songwriter Ryan Davis’ lyrical style. It’s not linear, and there’s no central theme. Instead, “Death Preferences” juggles stories within stories and thoughts within thoughts, but with these sharp, open-ended, evocative lines that break through the dense writing. And that’s reflective of his cut-and-paste process.

“I have a giant notebook that I keep, so any time I have an image in my mind, or a character that I find interesting, any little tidbit of imagination, I just jot it down,” Davis said. “And I go through later, and pick all of the pieces apart and try to weave stories out of it. So, they’re not personal narratives. They’re more like vignettes or short stories.”

“I just have never been really talented at sitting down and writing a song from my own personal perspective,” Davis said. “It’s awkward for me, it’s uncomfortable, it’s not rewarding. The joy in songwriting, to me, it’s creating these little worlds and these little paths that characters can go on.”

Davis, a Louisville native, grew up playing in punk bands, in which he usually sang, but he didn’t really start writing songs by himself until he was living in Glasgow, Scotland for a semester in the mid-2000s.

“I was alone and didn’t know anyone, in this time, so I wanted to see if I wrote a song, how it would turn out,” Davis said. “I didn’t know if that would result in being a punk song or a classic rock song, but it ended up being this borderline country-folk song, which was a total surprise to me.”

After he returned to the United States, Davis made some demos and started playing solo shows under the name State Champion. Over the course of the next couple of years, when attending the Chicago Art Institute, Davis added some other Windy City students to State Champion, turning the project into a fully-formed — and very loud — band. The current lineup — Davis (vocals, guitar), Sal Cassato (drums), Sabrina Rush (violin) and Mikie Poland (bass) — has been the core of State Champion since the second release, 2011’s Deep Shit. That record, like its predecessor, Stale Champagne, leaned into an unhinged, distortion-heavy sound. But Davis, who also founded Sophomore Lounge Records and the Cropped Out Festival along the way, started moving State Champion in a slower, more calculated direction for 2015’s Fantasy Error, something that continued, and was more rounded out, on Send Flowers. The idea was to give the stories plenty of space to live and breathe, and the challenge, as he told The Fader, was to “actively protect them from the fate of becoming punk songs.” That goal is evident from the unhurried riff and John Cale-like strings of the album’s opener, “My Over, My Under,” which kicks off with, “How many fantasies never make it past the pillow cover? / How many of the great love songs are wasted on the lousiest lovers?  /  How many sunsets were formed for those who were bored by the colors? / I’m not one of the wise men, man / No, I am one of the others.”

“This band has always been based around stories and characters and abstract narratives in a way, but for a long time we were just sort of magnetized toward being a garage rock band or a punk band, because that is what’s easy to do,” Davis said. “We’re not great musicians, so we figured out how to make it work that way, but on this one we really wanted to dial it back.”  •

You can buy Send Flowers through Sophomore Lounge Records, and the album is also available to purchase digitally and/or stream through iTunes, Bandcamp, Spotify, etc.