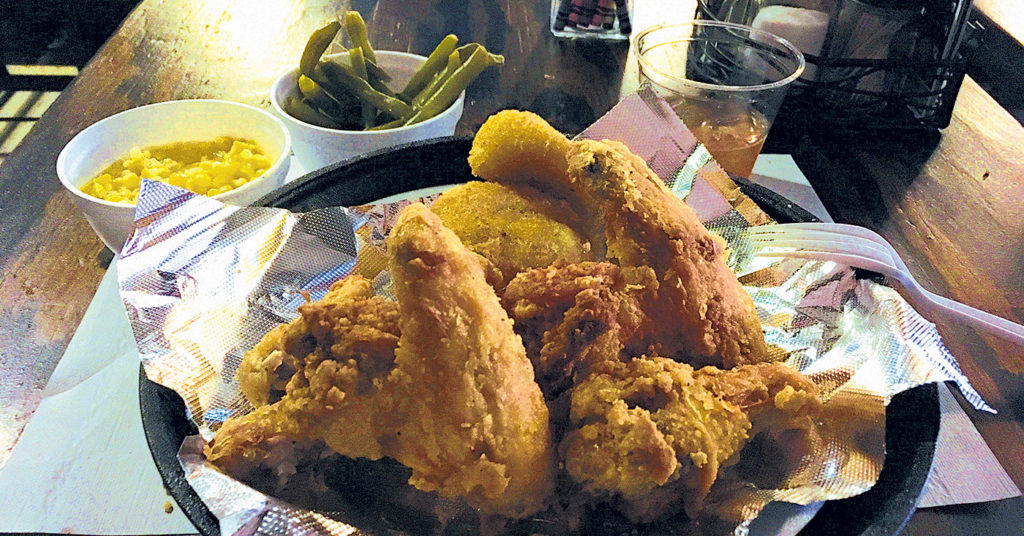 For LEO’s fall Dining Issue, we pitted Indi’s against Chicken King to find the best fried chicken in town. Here are Susan Reigler’s thoughts about what makes fried chicken delicious.

Decades before menus came with fine print cautions about consuming “raw or undercooked meat, seafood, eggs,” many in the Louisville area contained a temporal warning. If you were going to order fried chicken, the statement in not-so-fine print was: “This order will take an additional 20 minutes.”

That’s because fried chicken — the real thing cooked in a skillet, not in a deep fryer — takes time and care. Much to the chagrin of my younger brother, I almost always ordered fried chicken when our family dined out.

Dining out in the 1960s was a very different activity than it is today.

Restaurants we frequented such as The Old Stone Inn in Simpsonville, Science Hill Inn in Shelbyville and Louisville’s Bauer’s and the Brown Suburban, were anchored by meat-and-two-sides menus. Yeast rolls and various savory versions of cornbread dominated the breadbaskets and always seemed freshly hot from the oven.

In short, it was traditional Kentucky fare and not far removed from the food I enjoyed from my mother and grandmother’s kitchens. Mom and Grandmother were the ones who turned me into a fried chicken enthusiast. Indeed, I will have to admit to being a full-fledged fried chicken snob.

My grandmother lived on a small farm and raised her own chickens. When we were going to visit, she would efficiently dispatch one of the flock, pluck it, clean it, cut it up and consign the pieces to a cast iron skillet for attentive frying after generously dredging in flour seasoned only with salt and pepper. The chicken that emerged from the skillet, piled high on a platter set in the middle of the oak table, boasted a marvelously crispy and crunchy crust, which exploded with flavor, as did the juicy, succulent meat within.

By the way, the reality of where my meal came from, that it had been running about in the yard that morning before it turned up on my plate, did not turn me into a vegetarian. Quite the contrary. How was I going to be upset by anything so delicious? Those chickens led an active, omnivorous, free-range life and happy animals are tasty animals.

For the decades in the middle of the 20th century, many Kentucky restaurants produced chicken that was nearly as good. Then came the apparition of an old guy with a goatee, a string tie, a tricked out recipe of “herbs and spices” and a pressure cooker. Real fried chicken does not come in a cardboard bucket. Both the rapid growth of fast food chains and the wave of diversifying American restaurants inspired by chefs such as Julia Child and James Beard, hastened the disappearance of traditional fried chicken from menus. It was not a dish that could be easily “prepped” and it was the antithesis of “fast food.”

But, real fried chicken in restaurants has not gone the way of the dodo. It is an endangered species, not an extinct one. As with any rare bird, you have to know where to look for it.

Following a tip, my quest for fried chicken goodness took me to Louisville’s Smoketown neighborhood and the dark and cozy interior of Shirley Mae’s Café & Bar. Located a few blocks south of Broadway, at the corner of Clay and Lampton streets, it would be easy to dismiss the faded red brick building displaying a sign advertising “Whiskey by the Drink” as just another dive bar. But, in addition to whiskey, you can order real, pan-fried chicken. And it’s a deal.

The $10 “lunch special” consists of four, very meaty chicken wings and a choice of two sides. Gratifyingly, many of the vegetables listed as sides have a pig printed next to their listing on the menu. Seasoned with pork, not even the vegetables here are vegetarian. These include the smoky green beans I ordered to go with my chicken, though the fat used to flavor my fried corn was a large pat of butter.

The chicken, let me hasten to say, was perfect. The golden crust was crisp, savory and not too heavy. The white meat was tender and juicy without a drop of grease. And there’s no need to decide whether you want light or dark meat. The wings are the only fried chicken piece choice.

Proprietor Shirley Mae Beard and/or her daughter Theresa (who also makes all the café’s pies and cobblers) cook every meal to order. So my chicken took a good, full 20 minutes to arrive at my table. That was fine with me, since I had ordered a shot of Woodford Reserve (“Whiskey by the Drink,” remember) to sip. My hospitable server, stating his approval of my bourbon choice, brought me another beverage that he assured me I would like. He said it would also go well with my chicken.

I admit that I would not have ordered bourbon with sweet tea on my own. (He used Buffalo Trace, by the way.) But it was spot-on wonderful with the savory chicken. I may just order it up front the next time I go to Shirley Mae’s. And that next time, I will also save room for another authentic Southern treat, a slice of the house-made sweet potato pie.

If you’d like to try your hand at frying chicken at home, it’s of paramount importance that you have the right kind of skillet. It does not have to be cast iron, but it should be a heavy, flat-bottomed skillet with straight sides and a lid. (You may also buy your chicken at the grocery. No need to sacrifice those charming urban chickens you are raising in your little backyard coop for their fresh eggs.)

This recipe is adapted from “Shuck Bean, Stack Cakes, and Honest Fried Chicken” by Ronni Lundi, who may be an even bigger fried chicken snob than I am. So you know you can trust her.

As the oil heats, shake each piece of chicken — one or two pieces at a time — in the bag of flour until coated. Lay chicken in the hot oil, with the skin side down. (If you are frying mixed pieces of chicken instead of all breasts or thighs, put the largest pieces in the pan first.) You can nest the pieces fairly close together. When the skillet is full, turn the heat down to medium and let the chicken fry until it is golden and crispy, then turn and let the second side get just golden.

Reduce heat to low, cover and cook 25 minutes. (Check occasionally to make sure the heat is not too high and the chicken is not browning too fast or burning.) Remove lid and turn pieces over once more. Turn the heat up a bit — but not too high — and cook a few minutes longer until the crust is crisped all around. (If crust on the sides of the breast is still soft and mushy, turn those pieces on their side in the oil for a minute or two so they can fry up crisp.)

Remove chicken pieces from pan and drain on paper towels, then put on a serving plate. •