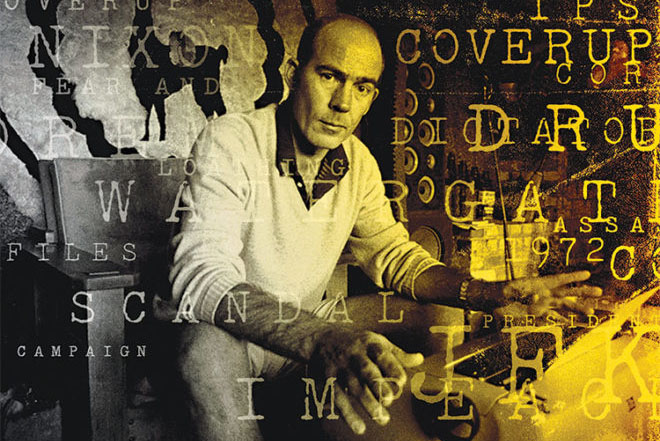 Does the legacy of Louisville native son Hunter S. Thompson need re-evaluation? In these days when the media is frequently accused of fakery, maybe his reputation is too far gone. After all, this is the man who said, “I hate to advocate drugs, alcohol, violence, or insanity to anyone, but they’ve always worked for me.” It would seem that there are more important reputations to shore up if journalism as an institution is to be held in esteem.

However — a clear recounting of Thompson’s career has to acknowledge that he saw an earlier version of a favorite practice of the Trump administration: manipulating reporters, while also denigrating them to curry favor with angry conservatives. Gonzo journalism may be remembered by some only for how it could contain trappings of clownishness — but not much looking below the surface is necessary to see how it developed as a thorny response to failings by more-straightlaced journalists. Nixon in particular played the press corps like a fiddle. Today, the best of the cold openings on “Saturday Night Live,” or Michelle Wolf’s scorched-earth stand-up at this year’s White House Correspondents’ Association Dinner, show some of the same alchemy of character and truth-telling spirit that Thompson pioneered.

Timothy Denevi, professor at Virginia’s George Mason University, is coming to the library to promote “Freak Kingdom: Hunter S. Thompson’s Manic Ten-Year Crusade Against American Fascism.” This book, covering the decade from JFK’s assassination to Nixon’s resignation, is scrupulously researched in a way that Thompson would admire — Denevi even rented a convertible to drive east from Los Angeles, re-creating the opening of “Fear and Loathing in Las Vegas.”

LEO recently met with the author to ask a few questions. Right away, we wanted to know — does he think Thompson would’ve applied his “fear and loathing” catch-phrase to the Trump presidency?

Timothy Denevi: Thompson had taken it from Thomas Wolfe’s ‘You Can’t Go Home Again.’ He mentioned it for the first time when John F. Kennedy was assassinated. The way he describes that moment is very similar to what many of us experienced on November 8th of 2016, when something solid — American democracy — seemed to be turning into quicksand at our feet.

When Kennedy was assassinated, [Thompson] was deeply afraid there would be martial law, that there’d be a transfer of power in an undemocratic way, and that somebody like Barry Goldwater might then win the presidency. [Goldwater] advocated the right to first-strike nuclear attack and defoliating Vietnam with nuclear weapons. He seemed to be saying to Americans, ‘If you’re willing to burn with me, then I’ll be the first to go up in flames, as we take on the communists and the Soviet Bloc.’ Whether or not it was true, that was the version of himself he was peddling, and Thompson saw it up close.

To look today and see how Donald Trump is using America’s openness to undermine its core principles is to be filled with an incredible fear and trepidation. And also to just be disgusted and feel that pure form of loathing — that somebody would take the best aspects of the American character and pervert and degrade them for the means of his own advancement. Which we saw with Nixon and which Thompson wrote about very clearly. To see it happening again is heartbreaking, but not surprising.

LEO: Is there somebody who you think is holding up Thompson’s example?
Yes, but it’s important to look at Thompson’s style as an approach. Not his prose. His prose was his lens — and when that gets imitated, it feels reductive. It doesn’t feel authentic. But what is authentic — what can be used as a tool by journalists right now — is the manner in which he indicted the way systems of power used the journalistic norms to control how their message is conveyed to the people.

His example is Nixon during the 1972 campaign. Limiting information for journalists — while knowing they have to file a story each day. Putting the journalists in pens, making them watch close-captioned television reports and knowing they won’t push back because it’d take so much effort to get more. Nixon’s anodyne, Madison Avenue version of himself is pushed to these reporters. And though they know it’s bullshit, even top journalists didn’t have the opportunity to indict the way in which Nixon was making them complicit in disinformation. But Thompson was able to do it when he had two, long-form columns a month. With five, six thousand words, he could dramatize — with himself as a character — the manipulation and the complicity of the press corps to Nixon’s insane limitations.

… Matt Taibbi comes to mind. Not for his style, which is similar, but the way in which he is constantly putting pressure on David Brooks — like journalism when it comes to opinion and the way a story can be controlled.

You were speaking to Thompson’s long-form pieces. In our era of the cable news cycle, with perpetual ‘breaking news,’ could you see how Thompson’s style might evolve today with the 24-hour news cycle — and with social media?
I think it depends on what beat he’s on. I have a friend, Jennifer Percy, who won a National Magazine Award for going to Japan and writing a story about tsunami survivors searching for their dead loved ones, called ‘I Have No Choice but to Keep Looking.’ She has the time to do these things — to engage herself in a story that’s like ‘Hell’s Angels’ [a Thompson classic]. Even with all the noise around her, she writes these very lyric, very literary and very cutting long-form works. I think [Thompson] would have that space still.

[Thompson] could write really pithy, small controversial statements — like, something about how baseball’s terrible — but written in his winning way. That would’ve set Twitter aflame! Which would’ve drawn Thompson away from that long-form space. And really, that’s where you’re able to indict, or dramatize and pull the veil back on the way they give information out to the press, in attempts to hold onto power. Twitter would’ve been a bad magnet.