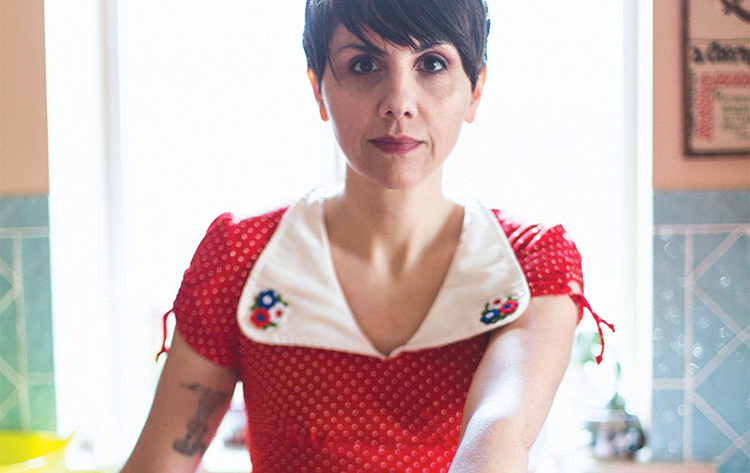 Jessica Hopper’s new book “Night Moves” is a fast-traveling, poetic memoir about a gritty and exciting pocket of Chicago that existed a decade ago. A music writer for more than 20 years, Hopper has worked for Pitchfork, MTV News, Rolling Stone and Spin, and has published her own fanzines. “Night Moves” is much different from the majority of her work that you’ve likely come across — it’s pieced together from previous notes and writings, matching the fleeting reality of a time and a place. We caught up with Hopper to talk about the book and the state of music journalism.

On the nonlinear, short chapters that jump quickly from scene to scene.
Jessica Hopper: “I wanted it to function kind of how memory works. It’s a book about the ephemeral nature of life, the ephemeral nature of cities — how those moments feel. I wanted it to evoke that. I wasn’t really interested in having a memoir that was like: At the beginning I’m a young writer with a dream and at the end I’m working on my first book manuscript. I wasn’t really interested in something that was tidy like that. And there was never any thought in trying to put it in that order. I wasn’t interested in the structure of memoir where you have a triumphant arc or something. I didn’t want the story to be distilled in that way. I didn’t think the story worked in that way, because I wanted it to be about a space and time, and not like a life lesson.”

On how the book came together, and what was important about revisiting that era of Chicago.
“The idea for this book wasn’t even particularly mine. I was working with a friend of mine who assisted me with a bunch of things in my last book and we were kind of creating an archive and centralizing a bunch of my work. And she said, ‘You have a bunch of writing here that isn’t related to your collection, isn’t criticism. It’s really just writing about Chicago and about your life that I think that you need to go back and revisit.’ She had already sort of compiled it. About 60 percent of the final book are things that she initially culled. So, it was kind of somebody else plotting it. I had different thoughts before the idea about making something with it, but once I did look at this stuff that is when, in examining what she had pulled out, you did see, ‘Oh, this is really something that documents a time where a lot of these things are now gone, and a lot of these things are still changing very quickly.’”

On how the book shows the time right before smart phones and social media changed the way we interact.
“That’s one of the only things, from that period in the book, where I do feel more and more nostalgic for in the present day. Less of [technology] as an interference, or buffer, or the constant mediation of our lives and our relationships with each other through social media.”

On her advice to young culture journalists, and her concerns about the industry.
“Find a way to write about the things that you care about. Not everyone can afford to write for free, meaning do a blog, do a newsletter. If you can try to find a way to write or to be in a dialogue with your peers or if you can find a mentor, or if you can do some of the things to just help learn how to write. But, like I said, not everybody can afford to write for free. I think we might go back to the days of everybody having crap jobs and you work on stuff at night. You work on a community newspaper. There’s very few weeklies where you can have real, serious local arts coverage. Stuff like that. The thing is, I think we talk a lot like, ‘Oh, journalism’s funeral’ and I can kind of seem a little insular, but, you know, what happens when we don’t have theater reviews. What does that do to that community?… A friend of mine, who has done these studies, within the nonprofit world, to try to help get some funding for more criticism, was like, ‘Plays close earlier.’ There’s all of these tangible effects.” •